It will include a working keyboard and, hopefully, fix all the problems the C64 Mini had.

By Matthew Humphries December 28, 2018
This story originally appeared on PCMag

There was much excitement back in 2017 when a C64 Mini got announced. However, the version that hit store shelves wasn't without its problems, most notably the poor joystick. It did include 64 games and could run BASIC, but the keyboard didn't function meaning you needed to plug another one in to type. An almost great release then, but not the end of the story.

Retro Games Ltd., who gave us the C64 Mini, this week revealed we're getting a follow-up device. This time it's a full-size Commodore 64 complete with a working keyboard!

On Christmas Eve, the first photos of a working prototype were posted on Facebook. The images reveal an early version of the Commodore 64 direct from the manufacture and "small modifications" are likely. There is no release date yet beyond 2019, but with the pre-production prototype already created it will hopefully appear before the summer.

Retro Games isn't revealing the final spec just yet, but I'm confident they will have taken into account all the complaints and feedback received about the C64 Mini. It's also pointed out in the Facebook post how much the Mini has been improved by recent firmware updates. At the very least that shows they are listening, which bodes well for the full-size Commodore 64. 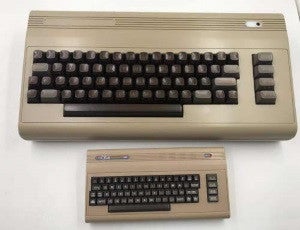 For now, the C64 Mini can be picked up for just $50. As the next model is much larger and includes a functioning keyboard I expect it to cost more than the $79.99 price point the Mini launched at. If they can keep the price below $100 then it should do well and entice many Mini owners to make the upgrade.