The historic building has been given a fresh makeover by the eco-conscious footwear brand.

By Hayden Field April 15, 2019
This story appears in the April 2019 issue of Entrepreneur. Subscribe »

Allbirds may be only three years old, but the San Francisco–based footwear brand is all about the future -- at the company and beyond. The eco-conscious company uses 90 percent recycled packaging, which has cut down on waste by a third since its introduction in 2017. Allbirds’ signature material is merino wool, a sustainable option produced year-round by the namesake sheep breed. And the company recently partnered with nonprofit Soles4Souls to distribute lightly used shoes to those in need around the world. That forward-thinking mindset extends to the company’s headquarters itself, located in the Jackson Square Historic District on a street that managed to survive the San Francisco Fire of 1851. Inside, as employees brainstorm new designs, products, and sustainability initiatives, a street-address placard from the 19th century hangs on the wall, reminding them of their work space’s history -- even as they build a brand with its eyes on the future.

“The product team is quite small here, and we all huddle at high-standing tables for 10 minutes every morning -- that’s where the action happens. We get to design and develop at the same time, which is unique to Allbirds. In a traditional setting, design wouldn’t be in the same conversation as the material innovators.”

“I work in legal, so most of my meetings tend to be a bit drier. But in one, our head of product development burst in with some wool samples and had all of us rub the wool on our faces and say which was the softest. That shows the quirkiness of how we operate, testing things and getting user feedback internally.”

“We have 20 people on the retail team, and we like to break the ice by playing a lot of different types of music in the store [downstairs]. We have a contest [among our staff] where anyone who can name the song playing first gets an extra 10 minutes on their break. We’re very fast-paced and super busy, so it’s nice to just do something fun.”

“At my previous companies, hackathons would just involve the tech team. But here, it’s company-wide. Last year we invested two full days and had a pitch session where anyone could give a 30-second spiel on an idea they’d like to work on. We self-formed teams with people from other departments, and everyone worked on the ideas that sounded interesting to them.”

“Every day at 4:00, we have our ‘40 at 4,’ where everyone gets moving. A different person leads it each week, and it always involves 40 push-ups, then they’ll share something that’s important to them -- soccer skills, Indian dancing, speed-walking around the block. I taught meditation and did a crystal sound bath. It’s a chance to get to learn about everyone else.”

“There’s a corner of the office where the design team meets. It's by windows and a plant wall -- cozy. We have brand designers, digital designers, and retail there, and we’re all doing our own work, but we like to give each other updates so we can get other perspectives.”

“I love that there are no walls here at Allbirds. Physically speaking, it’s totally open-­office, and metaphorically speaking, there’s no hierarchy. If something is on my mind and I want to run it by one of our cofounders, Tim [Brown] and Joey [Zwillinger], then I have that opportunity. I don’t have to walk on eggshells.” 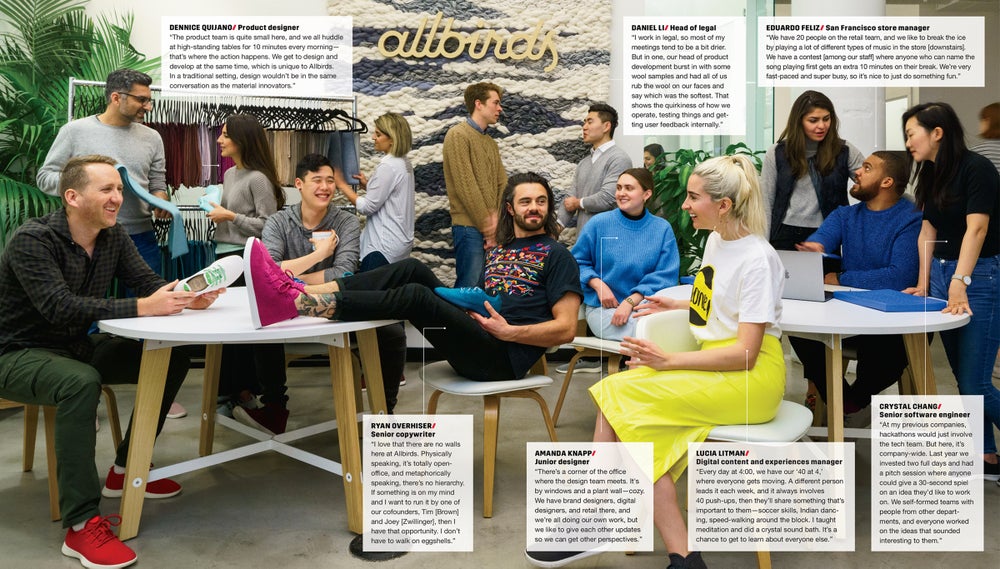