Facebook's Dead Users Will Outnumber the Living Sooner Than You Think

Every user who passes on joins the rapidly swelling ranks of Facebook's army of the dead.

By Rob Marvin May 3, 2019
This story originally appeared on PCMag

Death is coming for us all. But in the internet age, those who remain are faced with the very 21st-century problem of figuring out what to do with the data, social media accounts, and other digital remains of those who've passed on.

Facebook has been planning for this eventuality. The company rolled out a Legacy Contact feature several years back that lets you designate a loved one to take over your account when you die. And it recently announced a Tributes section on deceased users' profiles, giving friends and family a place for a memorial. 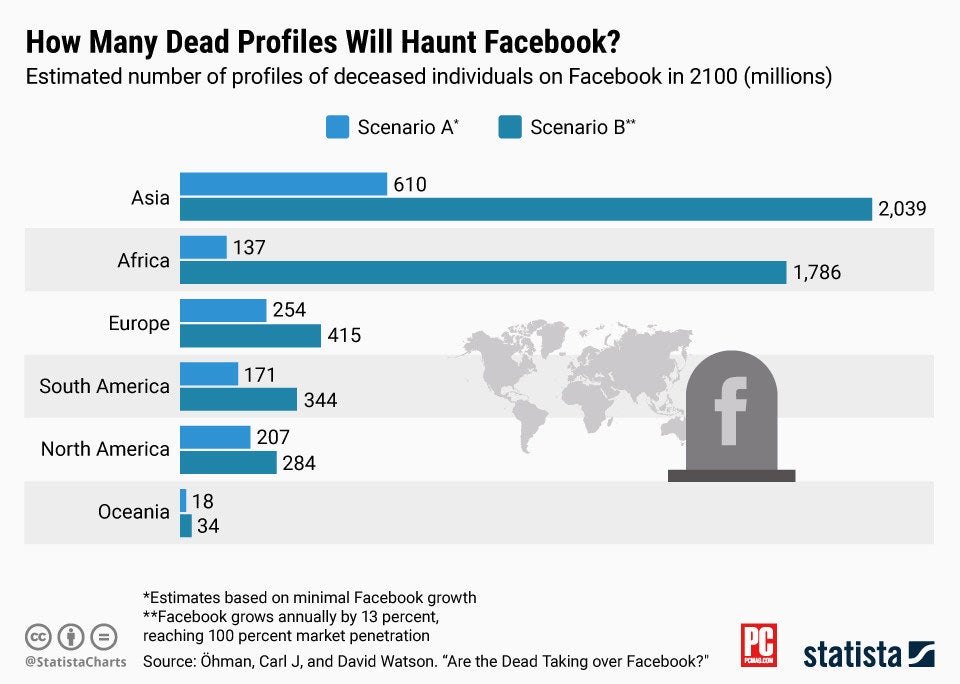 Issues have arisen that the company never foresaw. Facebook is now using AI to stop users from getting painful notifications, such as birthday reminders or flashback posts from friends and family who are no longer with us. If a legacy contact designates an account with a memorial section, that'll also stop the unwanted notifications.

These issues will only become more prevalent as the number of deceased users on the ubiquitous social network ultimately outnumbers the living ones. According to a new study from researchers at Oxford University, there will be more dead users on Facebook than alive ones by 2070.

The researchers presented two scenarios accounting for different potential rates of Facebook user growth from now until the year 2100. In Scenario A, which conservatively projects that Facebook will add zero additional users beyond this year, a minimum of 1.4 billion users will pass away before 2100. In Scenario B, which projects the social network continues to expand at its current rate of 13 percent per year (and reaching complete market penetration) that number of dead users would swell to almost 5 billion by 2100.

In Scenario A, there will be more dead users on Facebook than living ones in 50 years. That scenario is highly unlikely, the researchers said, unless Facebook sees "some cataclysmic events far more ruinous than the Cambridge Analytica scandal" that would cause its user growth to flatline completely.

More likely, if growth rates continue at a consistent clip, the dead will outnumber the living sometime early in the next century.

In either scenario, the researchers found that there will be far more dead users from more populous continents such as Asia and Africa, with North America far behind. The social network has long since reached its peak in U.S. users, and most of its growth in recent years (and likely going forward) is international.

Or as some Twitter users have joked, every Facebook user who passes on then joins the rapidly swelling ranks of Facebook's army of the dead.