The redesigned Prime Air drone is a 'hybrid' craft, which can take off and land like a helicopter, but also glide through the air like a plane.

By Michael Kan June 6, 2019
This story originally appeared on PCMag

Amazon expects to start delivering packages via air-based drones "within months," it said on Wednesday. But the upcoming Prime Air program will likely start off as a small-scale trial.

At a company conference in Las Vegas, the tech giant unveiled its latest attempt to build a flying drone that can carry goods to Amazon customers. The new "hybrid" craft can take off and land like a helicopter and also glide through the air like a plane.

"Our newest drone design includes advances in efficiency, stability and, most importantly, in safety," the company said in a blog post, which also includes a video of the drone in action.

As you can see, the craft transitions from helicopter to airplane modes during the test flight. Another interesting feature is the "shroud" around the machine, which doubles as a protective barrier and wings.

"The distinctive aircraft is controlled with six degrees of freedom, as opposed to the standard four. This makes it more stable, and capable of operating safely in more gusty wind conditions," the company added.

To prevent the drone from crashing into anything, Amazon says the craft has been outfitted with AI-powered sensors, which can detect both moving and static objects. This can allow the drone to recognize other aircraft, a chimney tower, and of course people and pets as the machine lands to make a delivery. 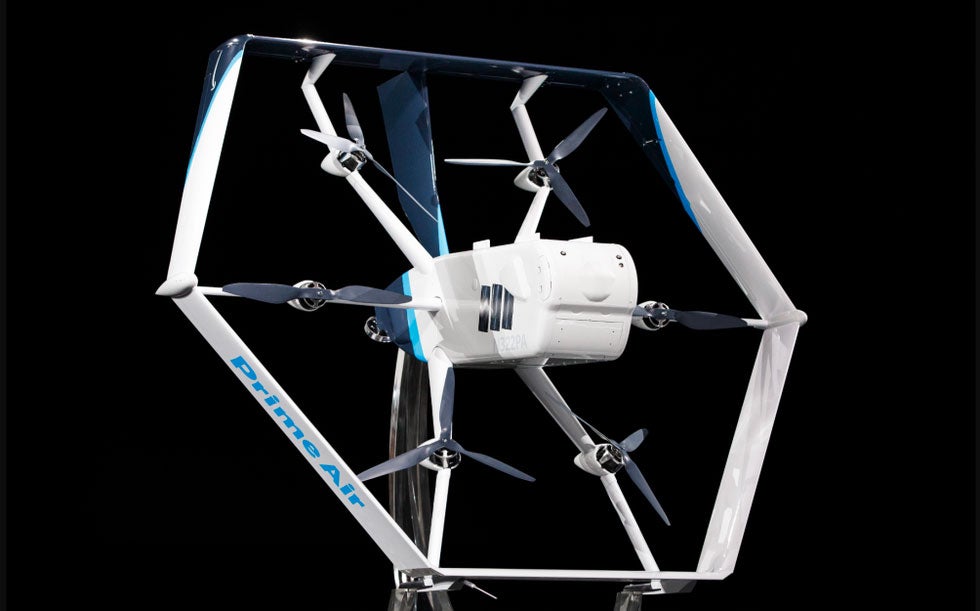 "Through the use of computer-vision techniques we've invented, our drones can recognize and avoid wires as they descend into, and ascend out of, a customer's yard," Amazon said.

For years, the company has been developing the drone technology to help it deliver packages even faster to consumers. It's currently working to make one-day shipping the default option for Amazon Prime.

The goal of "Prime Air" is to create a fully electric machine capable of flying up to 15 miles that can also deliver a package under five pounds within 30 minutes. But to make the drone program a reality in the US, Amazon will also need to secure regulatory approval.

The Federal Aviation Administration told PCMag it's so far only given Amazon a special certificate to operate the drones for research and development purposes in certain authorized flight areas. "Amazon Prime Air plans to use its aircraft for a trial operation in the United States. This certificate is valid for one year and is eligible for renewal," the FAA added.

Amazon declined to comment on where Prime Air will launch. But the company won't be the only player in the market. In April, one of Google's sister companies secured FAA approval to launch a commercial drone delivery service in the U.S. Wing Aviation, the Alphabet subsidiary, plans to launch the service in Virginia later this year.