What's the Scariest Thing About Driverless Cars? Hint: It's Not the Price.

Autonomous vehicles will kill your dreaded commute -- that is, if you're not too nervous to let them.

By Jake Leary July 1, 2019
This story originally appeared on PCMag

Stop me if you've had this fantasy: You're sitting in the front seat of your car as it speeds down a highway, your feet planted on the floor, hands resting in your lap. Maybe soft jazz plays, pausing only so your David Attenborough sound-alike self-driving car can give you your estimated arrival time.

But for me, this divine daydream usually ends abruptly and dramatically -- my car's dashboard goes dark and I plow into a semi-trailer, or a hacked AI vehicle sideswipes me, knocking my lateral mirror into a ditch. 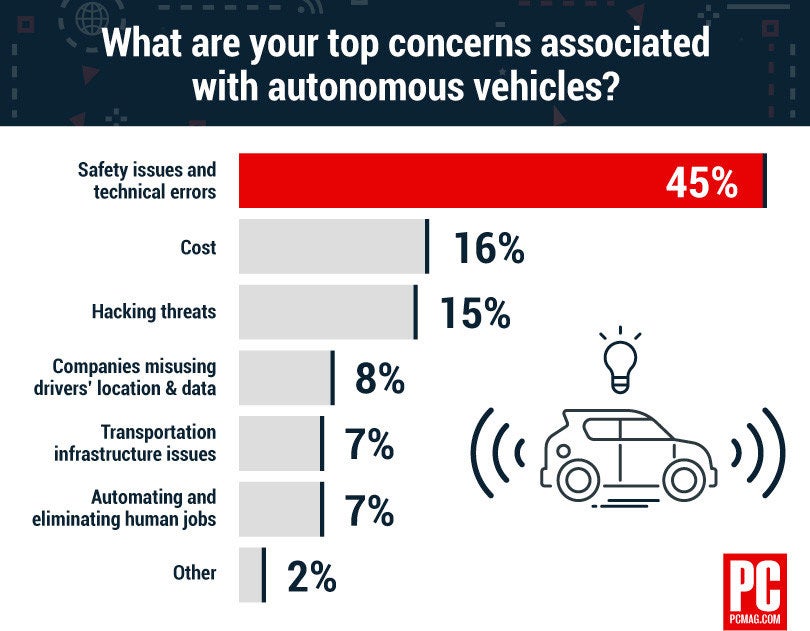 We hear about driverless cars most often when they crash -- and even when it's unclear whether the driver or AI is to blame, a few fatal accidents are enough to reinforce our worst fears. It's one thing to trust an AI to curate your workout playlist; it's another to trust one with your life.

Cost and hacking threats took the next spots on the list of concerns at 16 and 15 percent, respectively. While it's true exorbitant prices still plague the industry (Lidaralone can add more than $75,000 to a car's sticker price), hacking isn't as common as you may think. And corporate data misuse (8 percent), infrastructure issues (7 percent), and job loss (7 percent) rounded out the poll.

Tesla's Full Self-Driving Software Is Getting a 20% Price Hike