Nintendo Announces the Switch Lite for $199

It's a smaller, handheld-only version of the Switch with a 5.5-inch touch screen.
Next Article Add to Queue


As the rumors predicted, Nintendo has announced a smaller version of the Switch is set to hit the market in September carrying the name Switch Lite.

As The Verge reports, this Lite version of the Switch includes several big changes to the original model made possible and necessary by it being offered as a handheld-only device. First of all, it's smaller and ships with a 5.5-inch touch screen rather than the Switch's 6.2-inch display. The Joy-Cons are gone, replaced with integrated controls either side of the display. You'll notice the directional buttons on the left have also been replaced with a D-Pad.

No Joy-Cons also means Nintendo has removed the IR Motion Camera and the HD rumble feature from the Switch Lite. If you want to play a game that requires Joy-Con motion input, for example, 1-2 Switch or Pokemon Let's Go, you'll need to purchase a set of Joy-Cons separately to use with the Lite. The kickstand is also gone, which nobody will complain about, right? 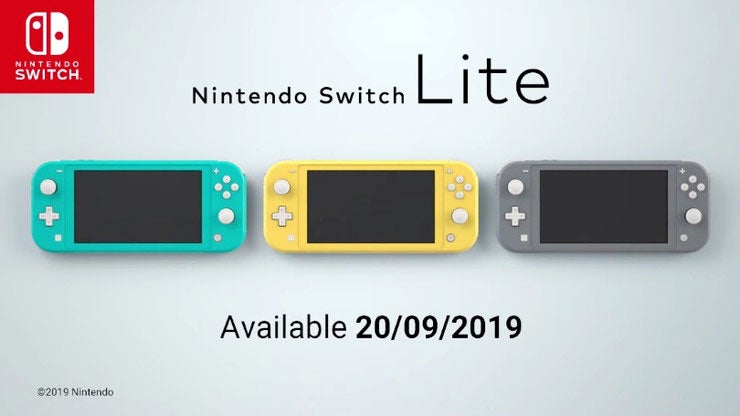 So the Switch Lite is smaller, less versatile, and is missing some key features of the original Switch ($299.00 at Amazon). However, that does come with some positives. For one, the Switch Lite is $100 cheaper at $199. It's noticeably lighter than the Switch and battery life is expected to be slightly better. There's also going to be three color options at launch on Sept. 20, with the choices being yellow, grey, and turquoise. A Pokemon Sword and Shield edition is also planned.

The price alone should make the Switch Lite a very popular choice and we could see the original Switch left on stores shelves. Isn't this also the clearest sign yet that Nintendo has no intention of replacing the 3DS?