On the Forbes list of top earners, an eight-year-old boy and a six-year-old girl beat out most of the competition

Onscreen fame and the fortune that followed used to lie below the Hollywood sign—but now, it's attainable on laptops in living rooms.

YouTube is the banner under which clicks and cash are to be had. Earning $20 million or so is so easy, a child could do it. And there are two children on the list that Forbes created of the top earners in 2019 (based on pretax income from ads, sponsored content, merchandise, tours, and other related earnings). 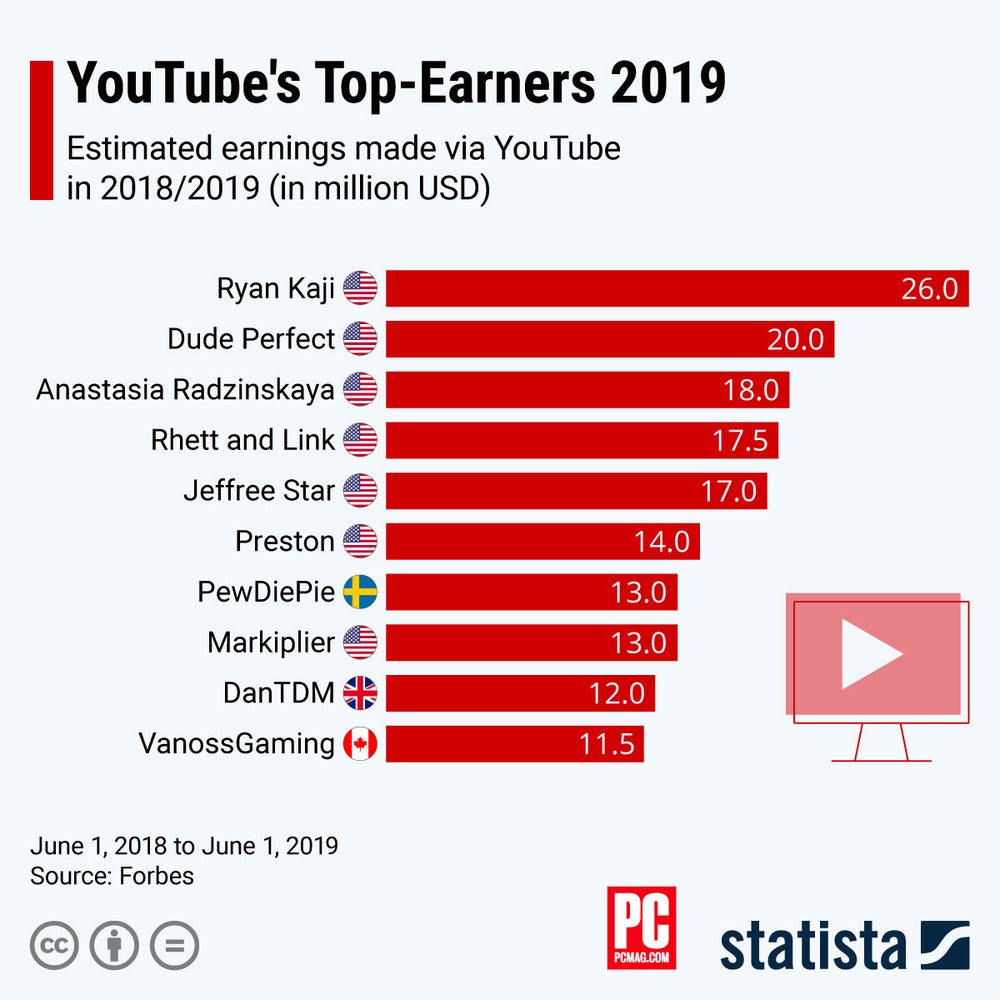 Eight-year-old Ryan Kaji earned $26 million last year, more than anyone else on YouTube. It's not a shock for anyone who has walked into a Target and seen that his Ryan's World toy line dominates nearly an entire aisle. Kaji started with unboxing videos, but his channel now includes a wide variety of content, and his empire also encompasses a clothing line, a Nickelodeon show, a deal with Hulu, and partnerships with plenty of brands.

Five-year-old Anastasia Radzinskaya isn't far behind at third place on the list, with earnings of $18 million last year. Radzinskaya was born in Russia and has cerebral palsy. Her parents started making videos of her to document her developmental progress. She now stars on six multinlingual YouTube channels (the largest of which is Like Nastya) and has deals with major brands. She moved to the United States in 2018.

Videos with children attract three times as many views as other videos, according to Pew Research Center. There are many worrying connotations attached to this data, but there are also adults who are willing to act like children to capitalize on it.

The second-highest earners on the list are five in their 30s who act like children under the collective name Dude Perfect. They blow things up in slo-mo, put on panda suits, and perfect trick shots, all for their channel and for a show they have on Nickelodeon.

Rhett & Link are also grown men but are also childhood friends who are living the dream: They have a comedy-focused YouTube channel that brought them $17.5 million last year.

If you follow Jeffree Star, then you probably don't need to look at this list to know he rounded out the top five by taking in $17 million last year. Just the other day, he said hello and welcomed viewers to his new 25,000-square-foot home. The makeup mogul takes a minute before the tour to remind viewers that six years ago, when he was making the move from Myspace fame to a new YouTube channel, he had just under $600 in his bank account.