Every Era Brings Challenges. If You Don't Forget Your 'Thing,' You Will Prevail.

By Cheryl Snapp Conner May 4, 2020
Opinions expressed by Entrepreneur contributors are their own.

This week a friend introduced me to Jay Kamhi, the founder of Kamhi World toys. When it comes to weathering challenges, he has seen them all. Now 59, he’s been an entrepreneur since his teens, spending the first 20 years of his career as a vendor on the streets of New York. “Always someone is chasing you,” he recalls. “The police. The rain. But when it rains, you sell umbrellas.”

Kamhi’s ever-evolving business has taken him from the streets to wholesale distribution, online sales, design and manufacture of novelty toys and, most recently, the manufacture and distribution of emergency medical goods. He’s lived pop culture, 9/11, trademark wars and political trends.

He famously landed himself in a trademark war with attorneys for Donald Trump in 2015 over a talking Trump pen. (He’s made Clinton pens. George W. Bush pens. Obama pens. No problem. As it turns out, Trump is the only U.S. president who has trademarked his name.) The adventure cost Kamhi $30,000 in unsellable pens. But he rose again. He made a version of the pen that avoids trouble by using packaging that doesn’t say “Trump.”

Today, along with 30.2 million small businesses throughout the U.S., he’s dealing with the current crisis. For ventures like Kamhi World, revenue for live business has plummeted as most U.S. residents are working and schooling at home. Many retail outlets are floundering or have failed.

For Kamhi’s team, there was moment of panic when they awoke to find that online sales had dropped by 30 percent in a day. It was a sobering moment. But it’s far from the first extreme hardship he’s known. His online business has pivoted and is rebounding.

Having lived through 40 years of business, Kamhi considers his strategies for surmounting difficulties to be his greatest asset. He's made a name for himself giving lectures to young and emerging entrepreneurs in incubator facilities, and looks forward to resuming that work. In addition to offering guidance, he looks forward to restoring their hopes and “giving them a reason to smile.” But in the meantime, he shared his ideas on the ways every entrepreneur can rise from the current challenges to succeed and prevail.

Businesses can begin from the simplest ideas. Remember the walking hand called “Thing” from The Addams Family? Kamhi does. As a child, he was obsessed with the show. He was a bit of a loner and didn’t have many friends. But years later, as a 17-year-old, he walked past a toy store window in New York and there it was: a hand sitting in the window, waving at him.

“Oh my God, it’s Thing, my imaginary friend from childhood!” he said. So he bought the hand. Then he found the inventor and told him he wanted to be the exclusive distributor of severed hands on the sidewalks of New York.

The inventor agreed. A week later, Kamhi was in business next to the New York Stock Exchange. He had an elaborate display — a salad bowl with a squirming hand was a “hand-tossed salad.” A hand between two slices of bread was, of course, a “hand sandwich.” In true New York style, a hand in a bag was the “designer handbag.”

He positioned himself near traffic and practiced his schtick. “Get them now, folks. Freshly cut this morning!” “These aren’t new; they’re second hand! Only a handful left! Handy gift.”

Within an hour he’d sold all the hands he’d brought, and had the time of his life doing it. For a 17-year-old in 1978, it was a heady rush to earn $250 that fast. People smiled. He was funny. He may not have played sports or gone to prom, but he could make people laugh.

The course of Kamhi’s life changed at that moment. He went home to announce he’d be passing on college to follow his entrepreneurial dream: to sell disembodied hand toys in New York. He was ready to face his father's disappointment.

But his father’s response surprised him. "Jay, I have no idea why you love this hand, this 'Thing,'" his father said. "But my mother never understood my 'thing' either."

What? His father had a thing?

“I wanted to act and write and direct movies,” he said. “But I never did. I became a social worker instead.”

What a realization. Then he put his hand on his son’s shoulder and said the words Kamhi will never forget.

“I kind of gave up on my thing. I know you’re going through a hard time right now. But keep going, and just keep doing your thing.”

The words were profound.

At all times, shift fast

Street vending was never dull. But 10 years in and multiple cities later, people’s interest in wriggling hands had petered out. So Kamhi had expanded his line of novelties and began wholesaling his products to stores.

In 2012-14 the concept made great sense on paper, but Kamhi soon learned his products were a little too cutting edge for Target and Walmart.

“In retail, there’s a single buyer who determines whether your product will be picked up for the entire chain. If they don’t understand what you have, they say no and you end up with no business,” he said. Unfortunately, the majority of products Kamhi thought were funny the buyers didn’t understand. Ultimately, he found himself 30 years into his career $1 million in debt and “100 percent broke.”

“I should have declared bankruptcy,” he said. “I loved those products, but I loved my employees more.” So he persisted and took his business online.

Retail stores, Kamhi, realized, required marketing not to the customer but to the buyer who held the power to get the product into the stores. Shifting away from selling directly to customers had taken him away from the ideas he knew in his heart were good. It had killed his sales, and his motivation.

The answer was another pivot. Amazon. Now there was nothing standing between Kamhi’s ideas and his audience. The winning product, it turns out, was the fateful Donald Trump talking pen. Whether people loved or hated Trump, the product provoked a reaction. Following the trademark name debacle, he spent nine months in creation and six months in promotion to create the perfect Donald Trump talking pen that would offend no one but be amusing to everyone, he assumed. Still, none of the stores would take it. 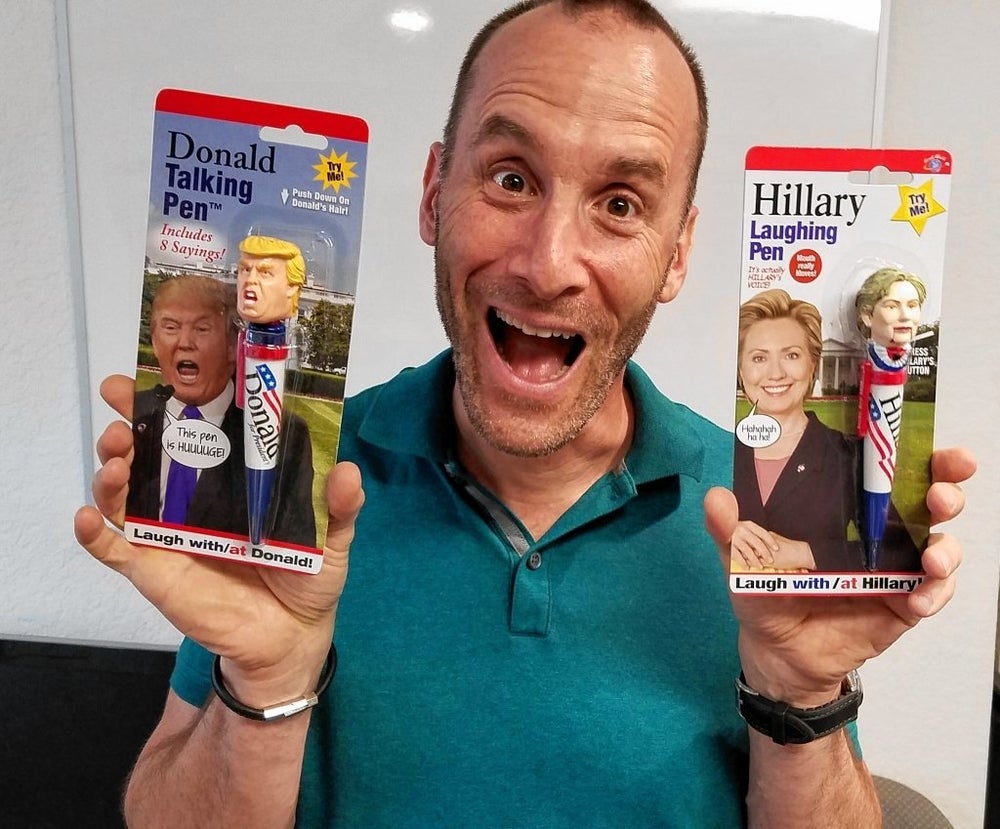 Then, in the space of a week, the pen was picked up on national television by the Sean Hannity Show and The View. The shows had polar opposite vantage points, but both thought the pen was funny.

Suddenly sales on Amazon went crazy. The talking pen became the most popular toy on Amazon within the space of two weeks.

New skills for a new challenge

Thankfully, by the time the global health crisis arrived, Kamhi had focused his business entirely online. But still, they experienced a 30 percent drop in a day. How do you manage a crisis like this?

Since the initial drop, Kamhi has managed to pull out of the sales slump. Based on his experience, here's the advice he offers to others:

At every stage, remain hungry and humble

As new infections slow and the worst of the crisis is behind us, the aftermath of economic devastation begins. Unemployment is predicted to surpass World War II levels, and the availability of emergency funds will subside. Businesses across America are struggling for life.

With clear heads and humility, every leader will need to continually examine the evolving “new normal” through the lens of “What do I have now?” and “What can I contribute next?” Kamhi’s newest mission is to share the legacy of his lessons, good and bad, with as many existing and emerging entrepreneurs as he can. His outlook is positive, and he knows he’ll prevail.

Throughout all of this, there's one person Kamhi still looks to for inspiration: his father. At age 89, Kamhi reports, his father has a YouTube channel and has produced eight short films with “something like 15 million views.”

Despite the increasing challenges, both father and son are fulfilled and living their legacies, never giving up on their “things.”

Related: Is Pivoting a Last-Ditch Effort or a Sound Business Strategy?