Amazon's stock surge has boosted its CEO's net worth to $186 billion, which exceeds the market capitalizations of Nike ($122 billion), McDonald's ($143 billion) and Costco ($145 billion).

By Theron Mohamed July 22, 2020
Opinions expressed by Entrepreneur contributors are their own.

Jeff Bezos is personally worth more than some of the US' biggest companies, including Nike, McDonald's, and Costco.

Amazon's stock price has surged 65 percent this year, boosting its founder and CEO's fortune to $186 billion as of Tuesday's close, according to the Bloomberg Billionaires Index.

Bezos owns almost 55.5 million Amazon shares, giving him an 11.1 percent stake in the e-commerce giant. His Amazon stock accounts for the vast majority of his wealth.

The world's wealthiest man is worth more on paper than Nike's entire $122 billion market capitalization. The sportswear titan made $39 billion in sales and had almost 77,000 employees and more than 1,100 retail stores worldwide last year.

The Amazon chief is also richer than the $145 billion market cap of Costco. The mega-retailer racked up $153 billion in revenue last year from its 99 million Costco cardholders, and employed 254,000 people.

The comparison of Bezos' net worth to some of America's biggest companies was first made by Fortune.

The spike in Amazon's stock price, and therefore Bezos' fortune, reflects the company's gains during the coronavirus pandemic.

More people are shopping on its website, watching movies and TV shows on Prime Video, and relying on its AWS cloud platform while stuck at home, and investors are betting Amazon can retain many of those new customers.

The Amazon boss is worth more than 13 of the Dow 30 companies, and more than 85 percent of the stocks in the Nasdaq 100 and S&P 500. Only 30 companies across the three indexes have a higher market cap than Bezos' net worth.

Here's a chart showing how Bezos' fortune stacks up against some of the biggest US companies: 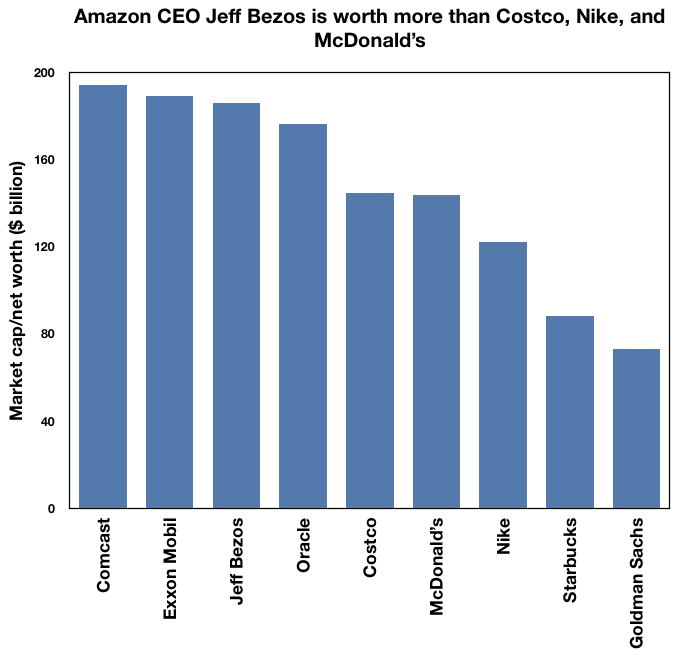