Amazon Prime Day: The Tech Products Most of Us Are Waiting to Buy

Amazon's annual shopping spree is taking specific aim at Black Friday this year. And Prime members plan to buy tech products to get well ahead of seasonal shopping obligations and snatch up early holiday deals.

By Eric Griffith September 30, 2020
This story originally appeared on PCMag

Now that we officially know when Amazon Prime Day(s) are happening this year — Tuesday, October 13 and Wednesday, October 14 — we decided to ask people exactly how they're going to handle the online retail giant's massive sale. One thousand US respondents ages 18 to 54 filled out a Google Survey between September 16 and 23, 2020. Here’s what we found.

A full 14 percent of 9,768 potential respondents that said they’d be Prime Day buyers. If that percentage seems small to you, it's a major increase from when we surveyed people in May 2019, ahead of last year's Prime Day. Back then, only 8 percent of respondents said they would definitely make a purchase. Holding Prime Day closer to the holidays is likely having a major impact, enough to almost double the purchase planners.

Still, that's 86 percent of all potential respondents claiming they would not deign to make a purchase if (when) Prime Day happens in October. Chances are good that the 2020 Covid-19 quarantine already put a lot of people ahead of their needs when it comes to purchasing many items, especially for working at  home. Others may be experiencing major economic hardship from the coronavirus.

We specifically questioned 1,000 of those people planning to make a Prime Day tech purchase. Thirty-nine percent are so serious about saving, they have delayed making a major tech purchase to wait for Prime Day. They would have been awfully sad if Prime Day didn't happen due to Covid-19.

The goal of most shoppers is to get early holiday deals (44 percent) and get ahead of holiday shopping (40 percent), but upgrades are also hot: 30 percent want better home entertainment, and 23 percent want a better work-from-home setup.

What exactly are they going to shop for? As you can see up top, the majority are going for entertainment. Thirty-nine percent want a TV or streaming device (respondents were allowed to answer in more than one product category). Almost as many will be shopping for a smart home device of some sort — that includes smart speakers and smart displays, such as Amazon's Echo line of products. Amazon, in fact, last week unveiled a number of new products in the line, naturally ready to sell them on Prime Day. Smart timing, Bezos, even if some of those products won't actually ship until 2021.

Everyday computing products, computers and tablets in particular, are in the middle. Microsoft and Sony aren't gonna be thrilled to see that gaming consoles are on the radar only for about 20 percent of buyers — but the new Xbox Series X and S and PlayStation 5 may not be available for Prime Day purchase: Xbox pre-orders are sold out as of this writing, and the PS5 won't really be for sale until November 12. 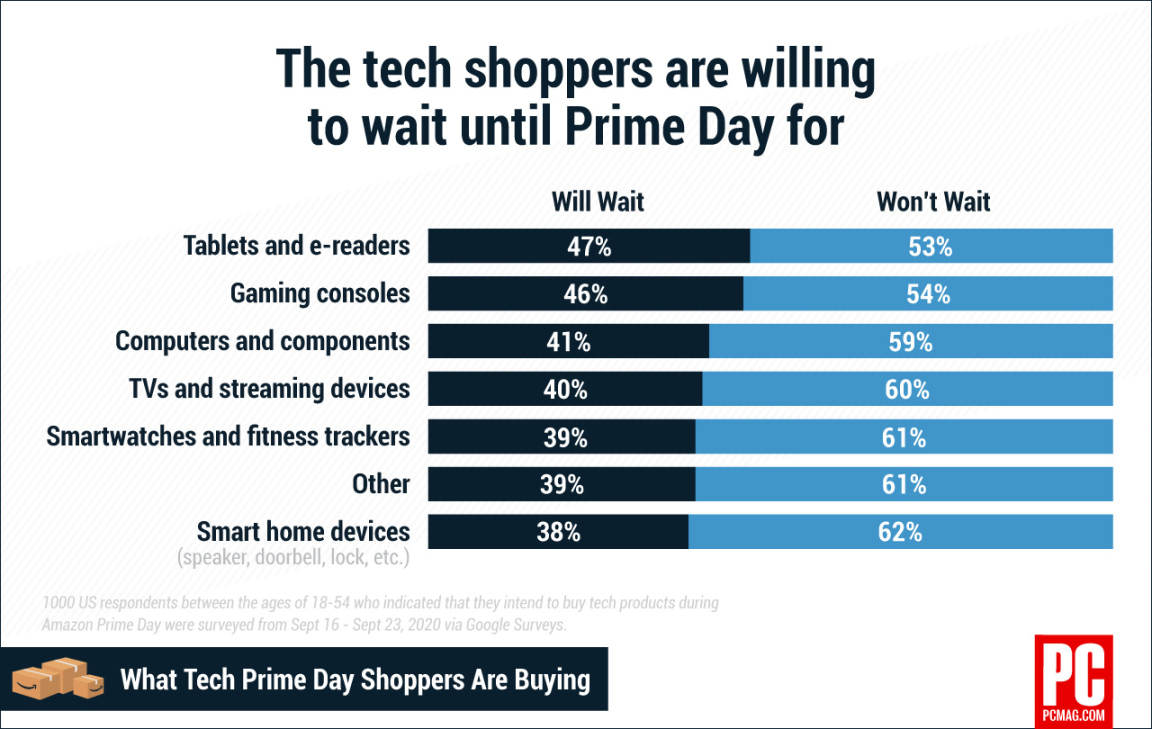 We broke it down per state to see what the top product category is with the most people in each area. 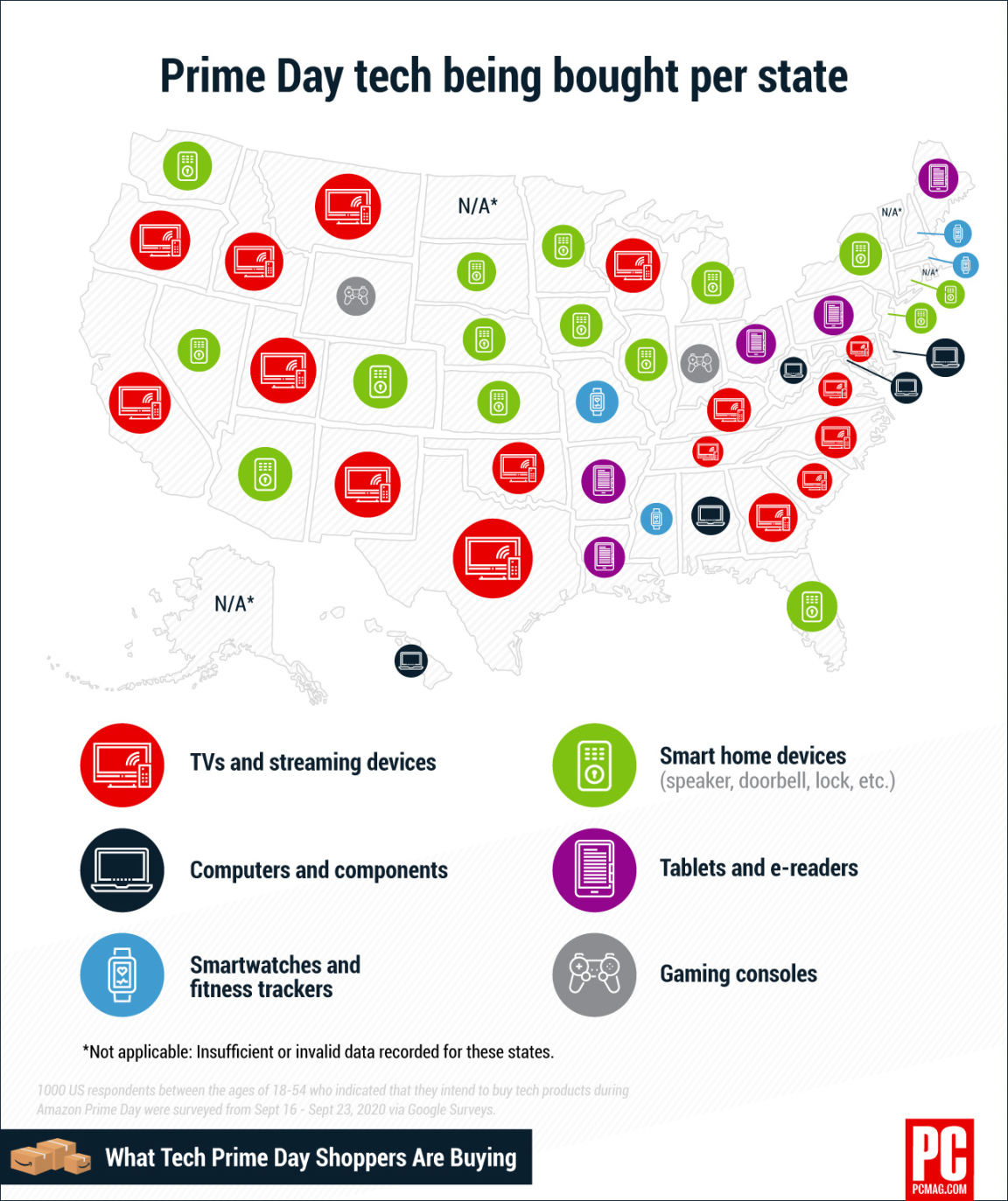 Amazon’s going to be interested to know that the vast majority of that 1,000 people planning to buy on Prime Day are already Prime members, at 88 percent. They are mostly ages 45 to 54. But at least 7 percent say they'll do their Prime Day shopping via the 30-day free trial membership (ahead of paying $119 per year or $12.99 per month for actual Prime and all that it entails, including streaming on Amazon Prime Video). 5 percent say they'll make purchases using someone else's Prime account. Those latter two are mostly 25- to 34-year-olds. The millennials don't mind subscriptions — so long as they're free.

The deals will almost certainly feature lots of discounts on Amazon-branded products. You might think Echo smart speakers and screens are the top choices, but only 16 percent of respondents said they'd go for an Echo product, down from last year. Kindle and Fire tablet desires are even lower (despite an increase in Kindles on the wish lists). 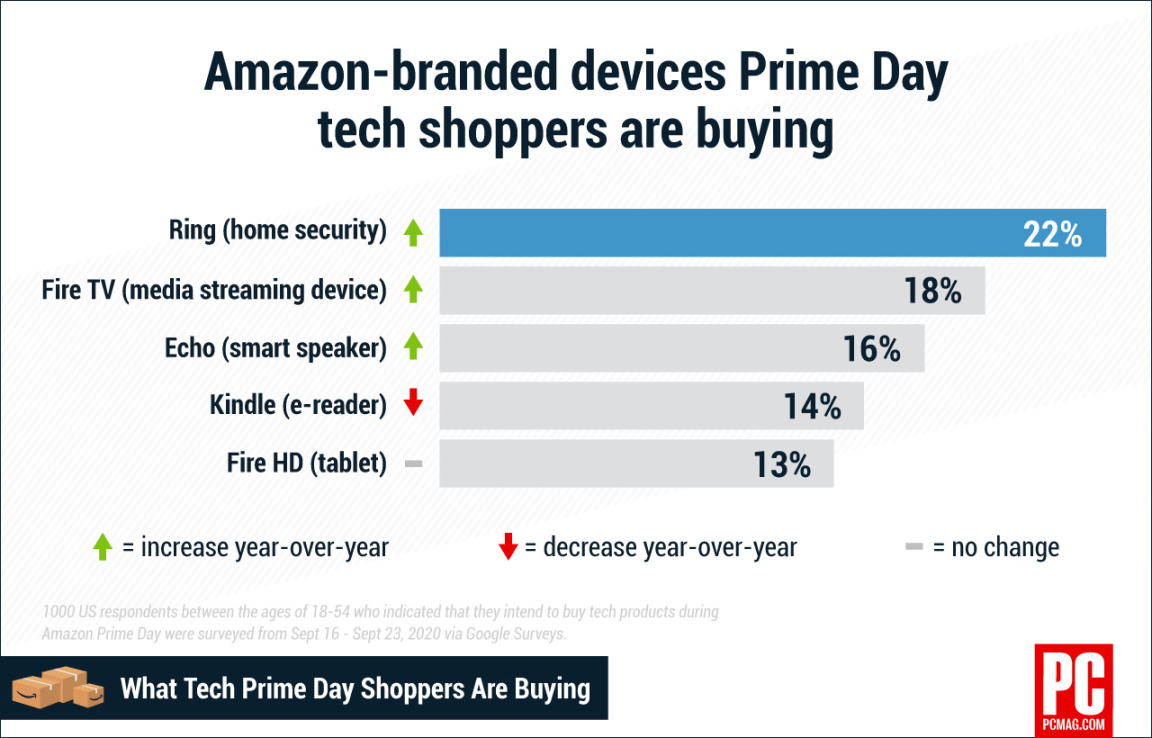 That's good news for Amazon's newly announced Ring camera drone — the Always Home Cam — that will actually fly around your house looking for security compromises, and won't take a video of you in the shower and broadcast it to the internet at all, for sure.

Amazon Prime Day 2021 Is June 21-22, and Kristen Bell Tells Us Why She's Partnered With Them to Promote Small Businesses