Netflix has never seen so much traffic as it has in 2020. What has everyone been watching?

By Chandra Steele October 28, 2020
This story originally appeared on PCMag

Have we ever as a nation watched so much Netflix as we have in 2020? Probably not, and also like so much else that has been far more important this year, states are divided on what they want to watch.

HighSpeedInternet.com decided to find out just what everyone is watching by analyzing Google Trends data nationwide.

Overall, The Umbrella Academy has overshadowed other shows, with fourteen states preferring it over all else that the streaming service has in its library. The honor is much deserved, since the second season of the show had the Hargreeves clan time travel to 1963, majorly impact the entire planet (again), and keep us entertained at a time when we needed it most. 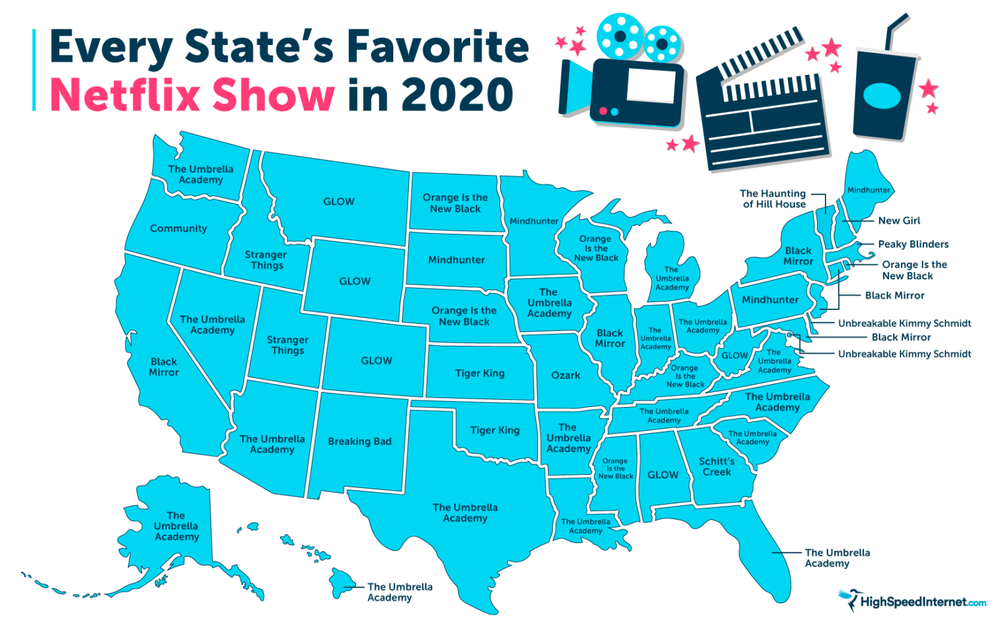 Early on in the pandemic, Tiger King tore its way through Twitter and made for many memes. It holds the top spot still in Kansas and Oklahoma.

GLOW was dominant in five states, but it couldn’t hold onto its Netflix contract. The streaming service delivered a huge blow to the show and its loyal audience by canceling it.

Times are dark, but New York and California somehow still want to imagine the worst—Black Mirror is more popular than all other Netflix shows in those states.

Very few non-Netflix Original shows dominated in any states. Georgia might have been catching up on Schitt’s Creek before its series finale or celebrating its big Emmy wins. New Mexico has a lot of love for hometown antihero Breaking Bad. And for reasons known only to Oregon and New Hampshire, they searched for Community and New Girl, respectively.