4 Things You Need to Know About a Potential "Lost Decade" for Stocks: Part 2

Today's Part 2 article features the SPY and reveals the "4 Things You Need to Know About a Potential "Lost Decade" for Stocks." Read on for all the details.

By Adam Galas October 15, 2021
This story originally appeared on StockNews

Today's Part 2 article features the SPY and reveals the "4 Things You Need to Know About a Potential "Lost Decade" for Stocks." Read on for all the details.

In part one of this series, we examined why Bank of America and Moody's think stocks could deliver virtually zero or even negative returns for the next decade.

Rising interest rates are the biggest risk that might make such grim forecasts into reality.

So now let's take a look at the two most important facts of all about a potential lost decade, what might cause rates to rise more than expected, and which stocks are most likely to soar, and which you should ignore if they do.

Fact 3: Inflation Is Back And It Might Be Permanent 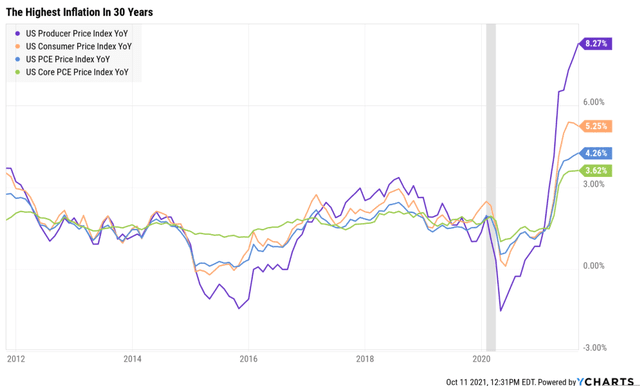 The Fed warned us that as the economy reopens from the pandemic, pent-up consumer demand combined with $3.5 trillion in excess savings, as well as pandemic supply chain bottlenecks could lead to significant transitory inflation.

The supply chain disruptions that were expected to peak in Q3 2021, and then gradually fade into 2022 and be gone by 2023, are proving more persistent thanks to several factors.

China is also facing an energy crisis created by historically low gas and coal reserves ahead of winter. This is causing rolling blackouts that is forcing many factories to shut just as US demand for holiday goods is at its peak.

Europe is also facing a historic energy crisis at the moment, with natural gas prices surging 500% and it's not even winter yet.

Morgan Stanley estimates that above $80 oil starts to drag on the US economy.

US producers, suffering from the worst decade for energy in history, are being extremely conservative with drilling spending and growth capex. Investors are tired of cumulative shale losses that the Wall Street Journal estimates at over $300 billion.

Add to this an increased focus on ESG, with European oil companies vowing to reduce production voluntarily in the coming years, and you can see why many analysts think that higher energy prices might stick around for many years.

On top of this there are several catalysts that are expected to be permanent, and potentially increase inflation far above the 1.6% we averaged during the 2010s, the lowest interest rate period in human history.

The first is the global supply chain, which we spent 30 years offshoring and perfecting for "just in time" delivery, proved to be incredibly fragile during the pandemic.

Now many companies are planning to diversify their supply chains, including some re-shoring of US production for the most mission-critical of parts and components.

This is likely to permanently increase production costs, which will be passed onto end consumers.

And finally, we can't forget about the flip side of rising wages. 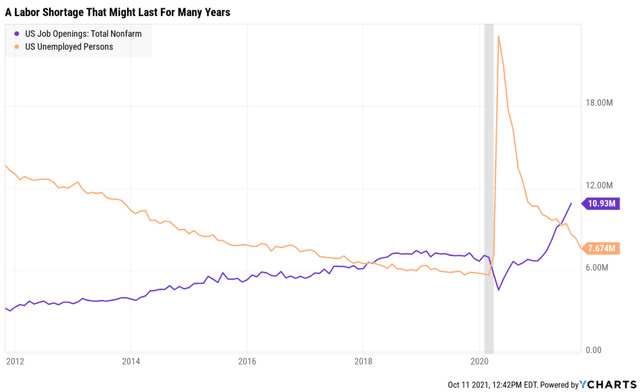 The labor shortage created by the pandemic, might not fix itself for many years.

For one thing, many Americans, flush with stimulus cash, are taking stock of their lives and choosing to be pickier about what jobs they accept.

Rather than just take the first available job, even if it pays little and has very poor working conditions and future career prospects, as occurred after the Great Recession, workers are now taking the time to hunt for the best working conditions, benefits, and pay.

Ultimately that should benefit the economy, with richer, happier, and more productive workers. But it could take several years for the labor shortage to work itself out.

What's more, approximately 2 million extra Americans retired during the pandemic according to the Congressional Budget Office, partially because a red hot stock market and soaring home prices, allowed them to afford to.

Some of these skilled workers might return to the labor force, at least part-time. But many are gone for good, meaning the companies might struggle to fill positions with qualified workers for far longer than initially expected.

Wage growth was 4.6% YOY in September according to the Bureau of Labor statistics. That's some of the strongest wage growth we've seen in over a decade. But companies will pass on most of those labor costs in the form of higher prices.

Does that mean hyper-inflation that perma-bears have been predicting for over a decade is here? That it's time to sell all your stocks and buy gold? 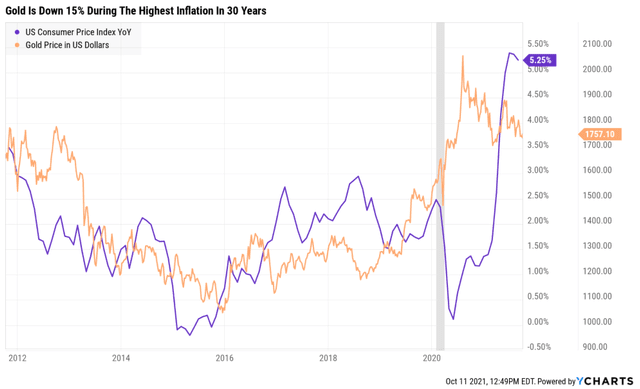 Actually Gold is down 15% as inflation hits 30-year highs. How on earth can that be? Because gold is actually most highly correlated to inflation-adjusted interest rates, or "real interest rates".

Because interest rates are rising slower than inflation, gold is one of the worst assets in 2021, a red hot year when almost everything is making money.

Or to put it another way, Gold only tends to do well if inflation is higher than the Fed thinks is likely, BUT not too high. That's not something the gold bugs told you about over the last decade, was it? 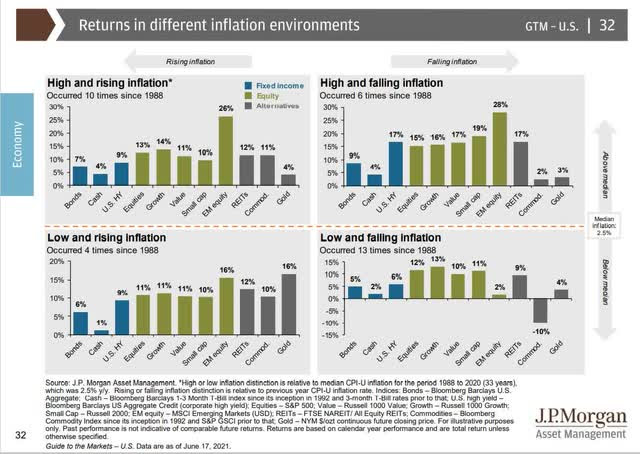 Actually, stocks, including REITs, are historically the single best inflation hedge because they are living companies that are able to pass on prices and preserve their margins.

Unlike gold, these blue-chip companies are run by skilled and adaptable management teams, that can not only adapt to supply chain snarls and rising input costs but any other challenges that appear, in the short or long term.

But the good news is that inflation isn't expected to return to the double-digit rates of the 1970s. 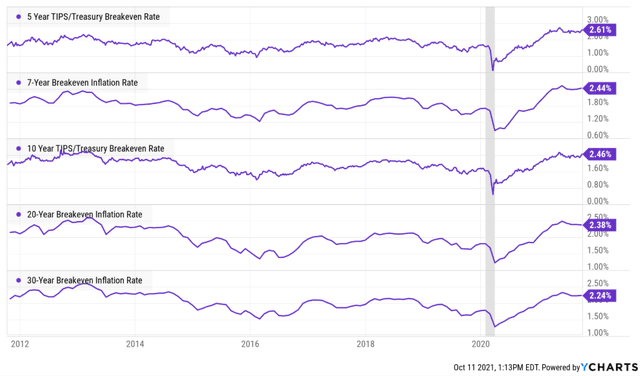 The bond market is pricing in 2.6% inflation for the next five years, and 2.24% over the next 30 years. That's above the Fed's target range but likely means that 10-year yields might average 3% over the 2020s and the Fed Fund Rate (short-term interest rates) the upper end of the Fed's 2% to 3% range as well.

And this brings me to the final fact about what investors need to know about a potential lost decade for stocks.

Fact 4: Some Stocks Will Tank And Some Will Take Crazy Profits To The Bank

On October 4th, 2021, the S&P hit its recent bottom, at least so far. It was down a grand total of 5.2%. A historically mild pullback that shouldn't have cost any investors with a sense of historical context, a wink of sleep. 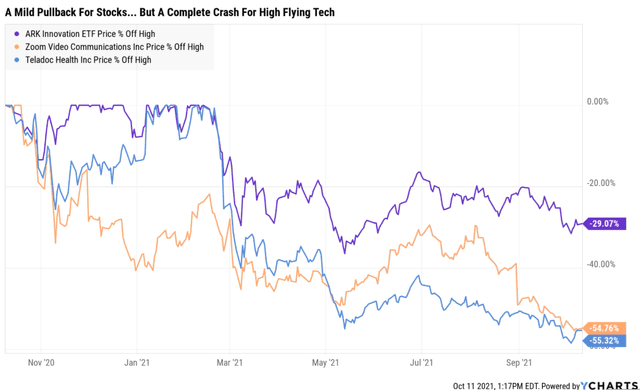 In other words, while most stocks were down, the most popular tech names of 2020 were absolutely wrecked. 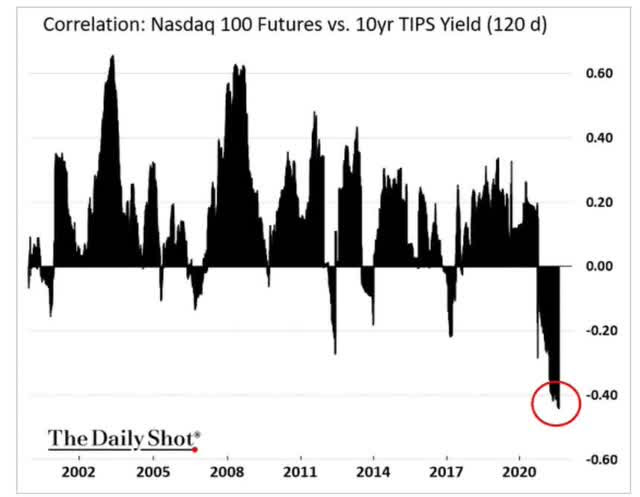 In the last 18 months, tech stocks have been inversely correlated to interest rates. This isn't always the case of course, but it hit a historic extreme in recent months, owing to historically high valuations on some of the most popular tech names. 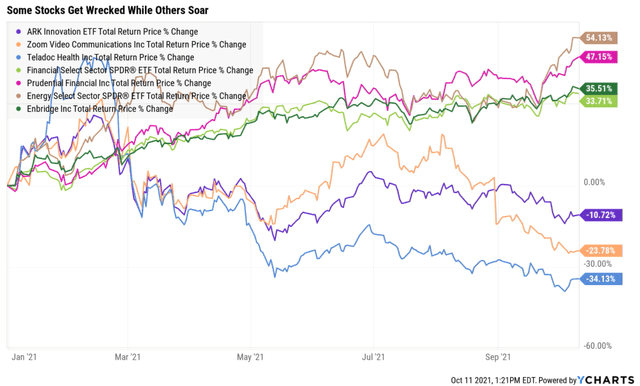 Energy, financials, and value, in general, are having a great year, while the most overvalue tech gets crushed from modestly rising interest rates. 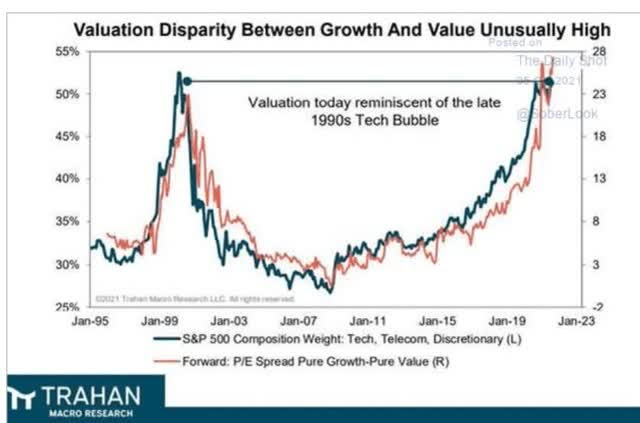 The last time value was this undervalued relative to growth was the peak of the tech bubble. After which value crushed growth during an epic seven-year bull market.

Does that mean that investors should sell everything tech and go all-in on value? No.

It means that a diversified and prudently risk-managed portfolio that has exposure to both high-quality growth, and value, is likely to do well.

The key is always to use disciplined financial science, focusing on safety and quality first, and prudent valuation and sound risk management always. 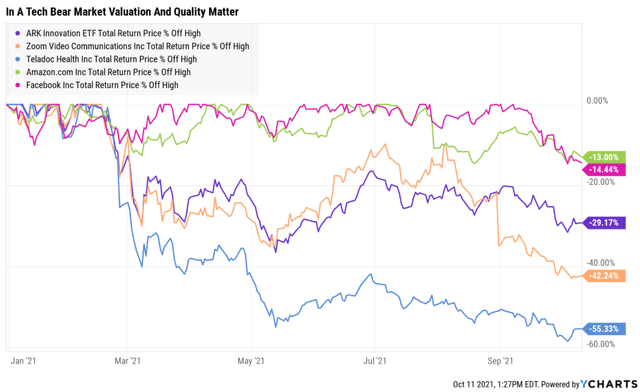 Here, for example, we can see that Amazon,  which has spent most of the last year getting steadily more undervalued thanks to the stock price trading flat while cash flows grew at incredible rates, has fallen 13% during the recent tech correction, a small fraction of its more overvalued and speculative peers.

Facebook, similarly, is undervalued and has fallen a mere 14% from all-time highs.

Of course not, but if you're looking to buy names like Apple, Alphabet, Adobe, Microsoft, NVIDIA, Mastercard, Visa, Square, Paypal, and numerous others, then the next year or two could prove to be just the kind of market you've been waiting for.

And in the meantime, our value and high-yield blue-chips will be paying us generous, safe, and steadily growing income, in all market conditions.

Income that can either pay the bills or fund opportunistic buying in the world's best growth names, when they become reasonably or attractively valued.

The post 4 Things You Need to Know About a Potential "Lost Decade" for Stocks: Part 2 appeared first on StockNews.com

3 Chip Stocks to Buy in December

3 Reasons Why FNF Group (FNF) Is a Great Growth Stock

Here is Why Growth Investors Should Buy CBRE (CBRE) Now