The stock of Canadian oil and gas company Obsidian Energy (OBE) has been skyrocketing in price, driven by rallying oil and gas prices. The stock has gained more than 500%...

By Subhasree Kar April 26, 2022
This story originally appeared on StockNews

The stock of Canadian oil and gas company Obsidian Energy (OBE) has been skyrocketing in price, driven by rallying oil and gas prices. The stock has gained more than 500% over the past year. And given the elevated oil and gas price environment and the company's operational strength, OBE seems poised to sustain its solid momentum. So, let's discuss this in detail.

Calgary, Canada-based Obsidian Energy Ltd. (OBE) focuses primarily on exploring, producing, and developing oil and natural gas properties in the Western Canada Sedimentary Basin. OBE's shares have had a great run, up 94.2% in price year-to-date. The stock has gained a whopping 515.4% over the past year to close yesterday's trading session at $8.00. Moreover, OBE hit its 52-week high of $9.84on April 18.

Rising oil and gas prices amid geopolitical crises and short supply have been driving energy stocks higher. And the market could tighten if the European Union (EU) bans the import of Russian crude oil, lending further support to high prices and substantially boosting energy companies' prospects. 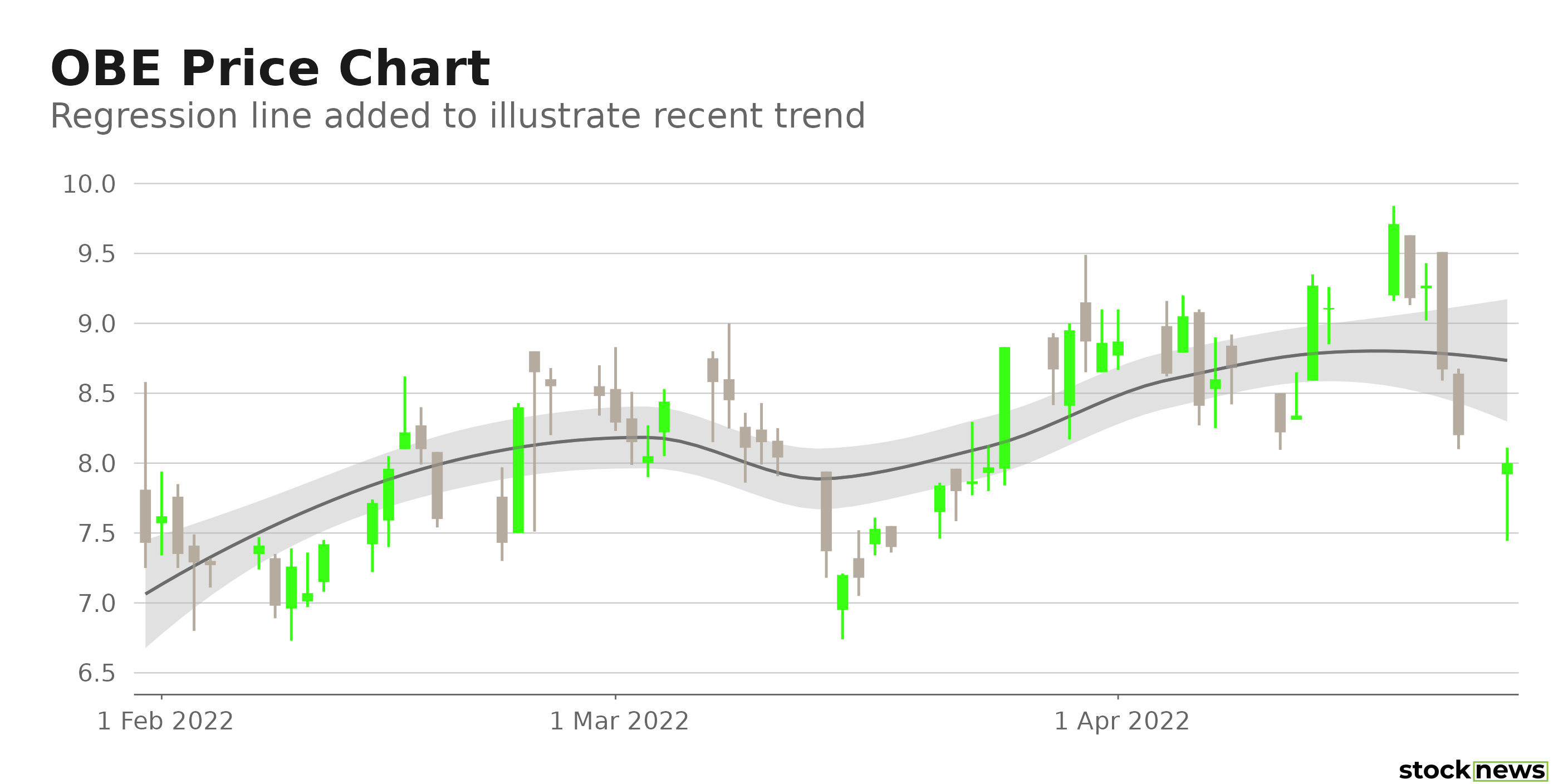 Here is what could shape OBE's performance in the near term:

The company's 2021 development program was completed with each of its 35 wells (33.8 net) on production, and in its 2022 development program, a total of 20 wells (19.5 net) have been rig-released to date, with eight wells (7.8 net) currently on production. Also, OBE expects additional wells (6.7 net) to be in production before the end of the second quarter.

In addition, OBE increased its 2022 production guidance range for the year by 1,000 boe/d to 30,100 -31,100 boe/d (mid-point: 30,600 boe/d). It also purchased 14 sections (8,960 acres) of prospective oil sands rights from the Alberta land sale in the Peace River region. OBE acquired the remaining 45% partnership interest in the Peace River Oil Partnership (PROP) asset in November 2021, which allows the company to have full operating and funding control over the asset, including a significant Bluesky heavy oil resource and extensive potential Clearwater position.

OBE has an overall B rating, which translates to Buy in our proprietary POWR Ratings system. The POWR Ratings are calculated by considering 118 distinct factors, with each factor weighted to an optimal degree.

OBE has an A grade for Momentum, which is in sync with its solid price gains over the past year.

Beyond what I have stated above, one can also view OBE's grades for Quality, Growth, Sentiment, and Stability here.

The company has garnered massive investor attention due to rallying oil and gas prices, helping it to register substantial gains. Also, the company has generated solid cash flows in its last reported quarter, resulting in a decrease in its net debt, and OBE plans further debt reduction initiatives this year. Also, given its strong operational guidance, the company seems well-poised to capitalize on the current robust commodity price environment. So, given its high rate of returns and sizable earnings growth, we think the stock could continue to soar in the near term.

How Does Obsidian Energy Ltd. (OBE) Stack Up Against its Peers?

OBE has an overall POWR Rating of B. However, one could also check out these other stocks within the Energy - Oil & Gas industry, Unit Corp. (UNTC) with an A (Strong Buy) rating, Athabasca Oil Corp. (ATHOF), and TotalEnergies SE ADR (TTE) with a B (Buy) rating.

OBE shares were unchanged in premarket trading Tuesday. Year-to-date, OBE has gained 94.15%, versus a -9.50% rise in the benchmark S&P 500 index during the same period.