Shares of the renowned electric vehicle manufacturer Tesla (TSLA) have plunged in price despite the company's solid financial performance in its last reported quarter. The stock closed its last trading...

By Nimesh Jaiswal June 1, 2022
This story originally appeared on StockNews

Shares of the renowned electric vehicle manufacturer Tesla (TSLA) have plunged in price despite the company's solid financial performance in its last reported quarter. The stock closed its last trading session at less than $800. However, given the company's in-house cell production, raw material procurement, and supplier diversification initiatives, will the stock be able to regain forward momentum anytime soon? Read on to learn our view.

Electric vehicle giant Tesla, Inc. (TSLA) in Austin, Tex., designs, develops, manufactures, leases, and sells electric vehicles and energy generation and storage systems. It was recently removed from the S&P 500 ESG Index. The stock has declined 12.9% in price over the past month and 33.8% over the past six months to close yesterday's trading session at $758.26. In addition, it is currently trading 39% below its 52-week high of $1,243.49, which it hit on Nov. 4, 2021. 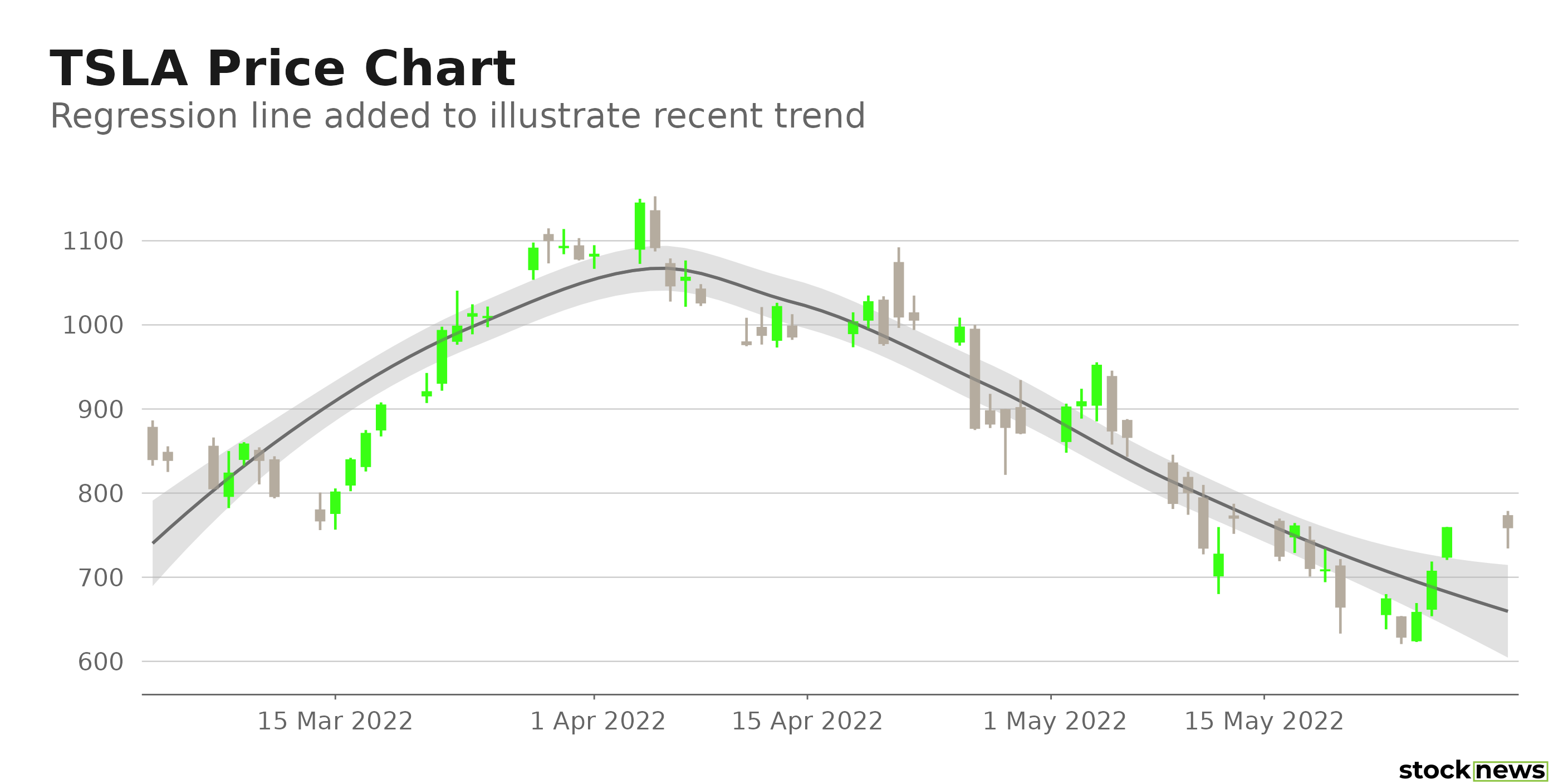 Here are the factors that could affect TSLA's performance in the near term:

TSLA has an overall C rating, which equates to a Neutral in our POWR Ratings system. The POWR Ratings are calculated by considering 118 distinct factors, with each factor weighted to an optimal degree.

Our proprietary rating system also evaluates each stock based on eight distinct categories. TSLA has a D grade for Value, which is in sync with its higher-than-industry valuation ratios.

The stock has a D grade for Stability, consistent with its 2.12 beta.

Click here to check out our Automotive Industry Report for 2022

TSLA is currently trading below its 50-day and 200-day moving averages of $906.57 and $912.94, respectively, indicating a downtrend. Furthermore, it could keep retreating in the near term due to concerns over increased raw materials costs and stalled factory operations. Also, the stock looks overvalued at the current price level, and we think it could be wise to wait for a better entry point in the stock.

How Does Tesla (TSLA) Stack Up Against its Peers?

While TSLA has an overall POWR Rating of C, one might want to consider investing in the following Auto & Vehicle Manufacturers stocks with an A (Strong Buy) or B (Buy) rating: Honda Motor Company, Ltd. (HMC), Bayerische Motoren Werke Aktiengesellschaft (BMWYY), and Daimler AG (DDAIF).

The post Is Tesla a Buy Under $800? appeared first on StockNews.com