A Unique and Fun Approach to Wine

St. Supery Vineyards & Winery offers fun and different ways of learning about wine, such as a smell-o-vision exhibit and a grape stomp. 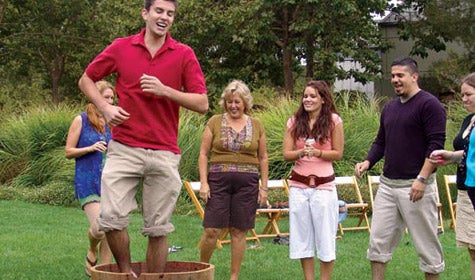 When French viticulturist Robert Skalli planted the first vines for what was to become St. Supéry Vineyards & Wines in 1982, he had a vision. He believed that Dollarhide, the cattle and horse ranch he was turning into a vineyard, would soon produce some world class wines. He built a winemaking facility on a second vineyard site in Rutherford in 1989, and St. Supéry Vineyards & Winery was born.

Today, Dollarhide Vineyard remains planted with the noble grape varieties of Bordeaux, France, and the Rutherford property is devoted to first class Cabernet Sauvignon. These grapes are the only ones used in St. Supéry's Sauvignon Blanc, Cabernet Sauvignon and Meritage blends. Winemaker Michael Scholz is enjoying his second stint with the winery. During his first tenure (from 1996 to 2001), Michael created the distinctive style now readily associated with St. Supéry Sauvignon Blanc. His Cabernet Sauvignons have also garnered critical acclaim with five Cabernets securing 90+ scores from Wine Spectator.

A visit to the St. Supéry tasting room proves to be rewarding to all who enjoy drinking and thinking about wine. There are many fun ways to taste and learn in the tasting room and gallery--including a much-talked-about smell-a-vision exhibit. Chef-led tastings are frequently held, and outside in the parc, guests can play petanque.

It is clear that Robert Skalli was on to something when he started St. Supéry Vineyards & Wines, and that this is only the beginning.

Getting there:
Located in Rutherford on Hwy 29 (St. Helena Hwy), just south of Rutherford Rd.