Breakout for Amphenol in the Charts?

Amphenol Corp. (APH) has been in a sideways trading range over the past few months. If the stock breaks through its resistance level, a breakout could...

By Christian Tharp
June 11, 2021
This story originally appeared on StockNews
Amphenol Corp. (APH) has been in a sideways trading range over the past few months. If the stock breaks through its resistance level, a breakout could soon follow. Read more to learn how to profit from this trade.

Amphenol Corp. (APH) is a leading designer and manufacturer of electrical, electronic, and fiber-optic connectors and interconnect systems, sensors, and cable. The company sells into a broad array of industries, including the automotive, industrial, communications, military, and mobile device markets.

APH is benefiting from a stable industrial end-market and a positive military spending environment. Its efforts in developing high-speed and power products should help the firm gain customers in the IT data communications space. Plus, its growing presence in the commercial aerospace market bodes well.

The company's balance sheet is solid with $2.4 billion in cash as of the end of the most recent quarter. This compares well with only $526 million in short-term debt. Its current ratio of 2.4 and return on equity of 23.6% are also favorable.

APH has grown earnings an average of 23.9% over the past three years, while analysts forecast 37.5% year over year earnings growth for this quarter. Its stock appears a bit overvalued based on a trailing P/E of 32.74 and a forward P/E of 29.67. The stock has shown mixed performance so far this year as shown in the chart below.

Take a look at the 1-year chart of APH below with added notations: 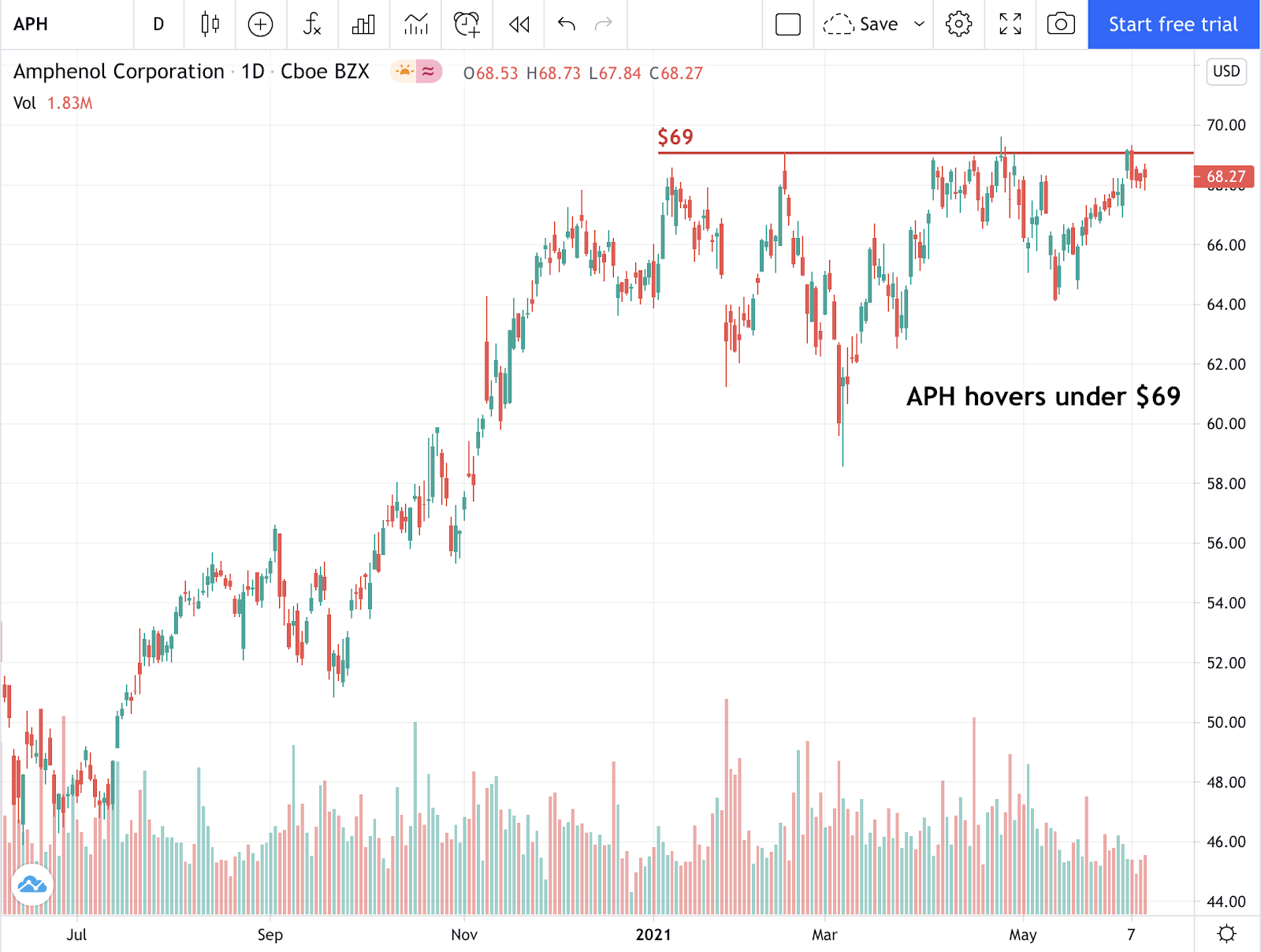 Chart of APH provided by TradingView

APH has been mostly trading sideways over the past few months, most recently stalling beneath the $69 level (red). That mark is also preventing the stock from hitting new 52-week highs. A solid close above that $69 level should lead to much higher prices for the stock.

APH has a 52-week resistance at $69. The possible long position on the stock would be on a breakout above that level with a stop placed under it.

APH shares were unchanged in premarket trading Friday. Year-to-date, APH has gained 4.65%, versus a 13.83% rise in the benchmark S&P 500 index during the same period.

The post Breakout for Amphenol in the Charts? appeared first on StockNews.com