The position was for a computer programmer who could finish their work, 'in about one-third the time that most competent people think possible.'

In August 1994, a little-known entrepreneur posted a job listing to Usenet, a pre-web message board. He was looking for "extremely talented" software developers to "help pioneer commerce on the internet."

The entrepreneur in question was Jeff Bezos, who was taking his first steps towards building Amazon. Bezos is now the wealthiest man not only in the world, but in all of modern history, and Amazon has grown into such a dominant force the FTC has started questioning its rivals about whether they feel crushed by the company.

BNN Bloomberg's Jon Erlichman dug up the vintage job ad last year. It's reproduced below in its entirety: 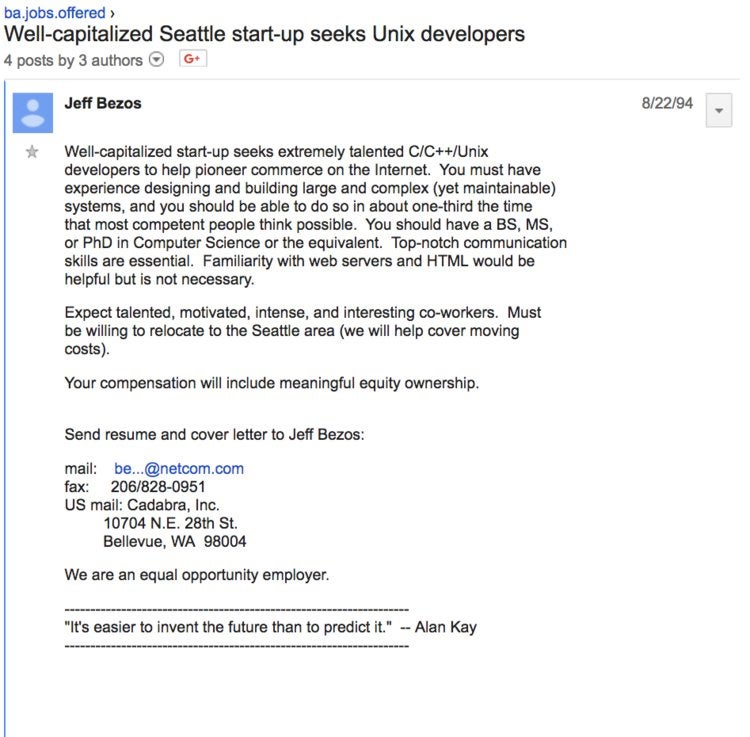 Well-capitalized start-up seeks extremely talented C/C++/Unix developers to help pioneer commerce on the Internet. You must have experience designing and building large and complex (yet maintainable) systems, and you should be able to do so in about one-third the time that most competent people think possible. You should have a BS, MS, or PhD in Computer Science or the equivalent. Top-notch communication skills are essential. Familiarity with web servers and HTML would be helpful but is not necessary.

Expect talented, motivated, intense, and interesting co-workers. Must be willing to relocate to the Seattle area (we will help cover moving costs).

Your compensation will include meaningful equity ownership.

We are an equal opportunity employer.

"It's easier to invent the future than to predict it." -- Alan Kay

At this time when Bezos posted this ad he had not even settled on the name "Amazon" for his startup, according to Brad Stone's Jeff Bezos biography, The Everything Store.

Whoever replied to that post was applying to "Cadabra," as mentioned in the ad. "Awake.com," "Browse.com," or even "Relentless.com" were also names Bezos was considering at the time, according to the Stone. If you type any of those three domains into your browser today, you'll be redirected to Amazon.

The quote at the end is from computer scientist Alan Kay, winner of the 2003 Alan Turing Award -- computer science's most presitgious accolade.

It may be lost to time who eventually got the job listed in the Usenet post, but soon thereafter Bezos hired Shel Kaphan as the company's first employee and CTO in charge of building its technical infrastructure.

In the job listing, Bezos said he was looking for an engineer who could build complicated systems in "about one-third the time that most competent people think possible." In exchange, they would get "meaningful equity ownership."

How much would that Amazon stock be worth today?