Every Minute Online Is a Battle for Consumer Attention

Check out this not-to-scale visualization of what is happening on the internet every single minute of every single day this year.

By Eric Griffith
March 21, 2019
This story originally appeared on PCMag

We all know the internet is a big place with a lot going on, but the chart above -- put together by media consultants Lori Lewis and Chadd Callahan for All Access Music -- really points out the sheer amount of activity vying for (or constantly stealing) our attention. (We found it on Digg.)

Pulling public records and claims from major internet companies, the two have for the last three years cobbled together a chart of what happens on average every minute of the day online. The numbers are staggering.

All of the following are happening each minute: 188 million emails and 18.1 million texts sent. 41.6 million messages sent on Facebook and WhatsApp combined. 1.4 million swipes on Tinder.

The comparisons go back to 2017, and not much has radically changed, except that numbers keep going up. The comparison chart here showing 2018 versus this year gives a pretty interesting view. 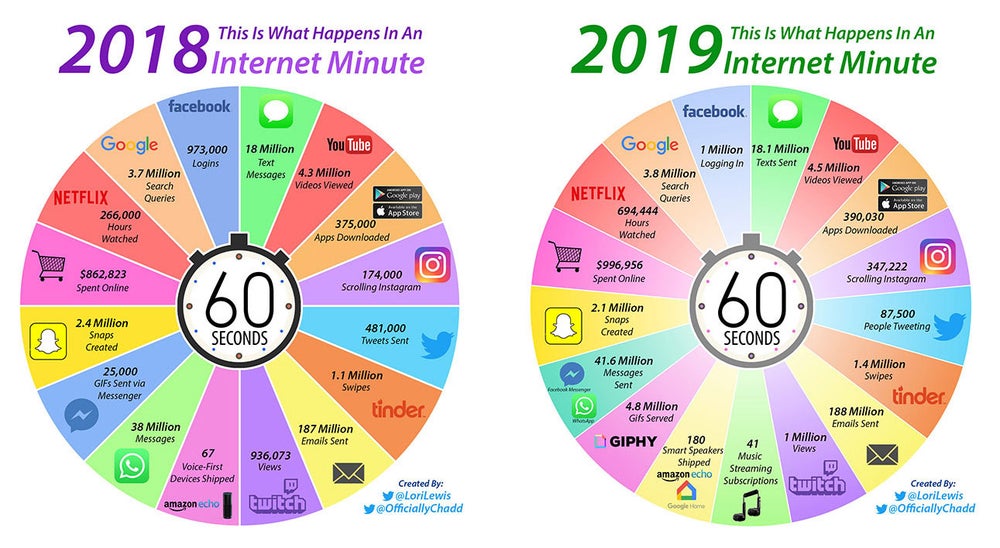 Notice first that just about every measure has risen. Facebook is probably more hated than ever, but it still has more people logging in every minute than last year. Google has more searches. Netflix more than doubled the number of hours watched. More apps are downloaded. More money is spent online (from $862,823 per minute up to $996,956 per minute this year; 2020 should crack a million per).

The only numbers that appear to have gone down are Snapchat's, probably because they redesigned, and everyone hated it. Twitter's looks lower, but the social media site switched the metric from tweets sent in 2018 (481,000 per minute) to number of people tweeting (87,500 per minute), so it's not a direct comparison.

There are a few new metrics for 2019: 4.8 million animated GIFs served per minute by Giphy is one, and it shows just how important that outdated image format remains. Adding WhatsApp to the "messages sent" list is another. The number of streaming music subscriptions started is also new for 2019: it's only 41 per minute, but that's going to add up to 21,549,600 new subs for the year.