How to Bet on the 2017 Kentucky Derby Online

Saturday is the 143rd running of the Kentucky Derby. Here's how to place your bet even if you're miles away.

By Evan Dashevsky
May 5, 2017
This story originally appeared on PCMag

Every spring, a group of very expensive horses with very ridiculous names heads to Louisville, Ky., to try to earn a lot of money for their already wealthy owners and top stud privileges for themselves.

This year marks the 143rd running of the Kentucky Derby, the main jewel in U.S. thoroughbred horse racing's annual "Triple Crown." While some may be content to partake in the julep-soaked, floppy hat-adorned festivities for the fun of it, the real excitement comes from the possibility of winning some cash money.

Even if you don't make the pilgrimage to Churchill Downs, that doesn't mean you won't still be able to win some moolah. If you're looking for some depressing IRL interactions, you could try a local off-track betting opportunities if they are available in your area. But thanks to the internet, it's possible for anyone to bet directly from their computer.

On the up and up?

You may be asking yourself a version of the following question: "Since internet gambling is currently not allowed across state lines, is it safe and legal to bet on the Kentucky Derby online?" Well, my cautious friend, the definitive answer to that question is "kinda sorta mostly yes."

As it stands, online gambling in the U.S. exists in a precarious legal netherworld. The past decade has seen all governmental levels issue conflicting and occasionally vague proclamations regarding online gaming. Following a 2011 Department of Justice about-face on the regulation of non-sports online gambling, several states felt free to open in-state online gaming, while others established their own specific online gambling prohibitions.

And then throw into the mix the fact that the Caribbean nation of Antigua and Barbuda successfully petitioned the World Trade Organization to force the U.S. to allow cross-border online gambling (which the U.S. has basically just decided to ignore). 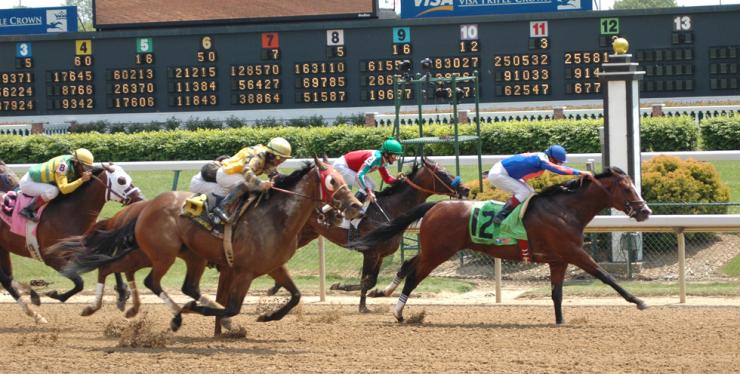 In the wake of the DOJ's position change, Congress made several failed attempts to legislate online gambling on the national level. It's interesting to note, however, that few of these proposed nationwide regulations involved horse racing. In fact, they often specifically exempted horse racing from further regulation.

Horse racing enjoys a mainstream cultural cache not shared by other forms of gambling. And this acceptability has filtered through to regulatory bodies that have bestowed online betting on horse races with something approaching legitimacy.

"It's certainly closer to legal. Anything associated with horse racing tends to be legal," said Joseph Kelly, professor of business law at SUNY College Buffalo and co-editor of the Gaming Law Review.

So, while not unequivocally legal across state borders, betting on the ponies online is not explicitly illegal either. And what does that mean for you, law-abiding citizen? From a criminal point of view, there is very little chance that online gamblers would ever be prosecuted on the state level (even though online gambling is, for example, considered a Class C felony in Washington state), and almost definitely not on the federal level. And, just as important, your money is probably going to be secure -- as long as you bet wisely.

According to Professor Kelly, whether betting on the Derby on a site based in the U.S. or overseas, the most important thing to consider is that the site has the funds and intention to pay winners. That means researching if a site has a good reputation and taking into consideration if it is located in an area with high legal expectations, e.g. a betting site in the U.K. would probably be a safer bet (excuse the pun) than one based in Costa Rica.

A Google search will indeed pull up a number of foreign-based sports betting sites that will allow you to bet on the Derby. However, the publicly traded Churchill Downs Incorporated offers its own Lexington­-based (but Oregon-licensed) betting site, TwinSpires, which is open to U.S. residents over 18 (21 in Washington; in fact, the site is currently only open to U.S. residents who can prove they reside in a state where online gambling is legal).

It's free to place a bet on TwinSpires if you link your bank account (though it may take three to five business days to collect your full winnings); however there is $5 charge for using a MasterCard or Visa (American Express and Discover are not accepted, but more on that below).

You should also note that there is a chance your bank or credit card will not play nice with TwinSpires. The site, for example, specifically states that "We have found MasterCard credit cards to have a better acceptance rates than VISA credit cards."

This is where the implicit rather than explicit legality starts to matter.

"Banks are worried about legal issues, even in a state like New Jersey where online gambling is legal," commented Kelly on a major hurdle for online gambling. Many financial institutions remain iffy on online gambling, even with well-regarded organizations like the Derby or among in-state online gambling operations that have been blessed by the legislature and are only open to local residents.

Indeed, many New Jersey online gamblers have reported problems using credit cards in the past (more so with Visa than MasterCard, while American Express and Discover have specifically steered far clear of onling gambling for American users).

Financial institutions are specifically cautious about unwittingly facilitating money laundering schemes that have been associated with online gambiling. Though from Professor Kelly's point of view, this policy is misguided as "using credit cards or other official avenues would leave a paper trail that a trained specialist could easily spot."

As online gambling gains momentum (which it is), financial institutions will likely begin to offer tools that their customers want.

There are a number of online horse race-wagering sites out there, many of which have been around for several years. As previously mentioned, your money is probably safer if you play with a U.S.-based entity as opposed to one with its servers stored overseas. Some other popular options include the aforementioned TwinSpires (which I have used in the past and which it's worth repeating is the official partner of the publicly traded Churchill Downs), XpressBet (an official partner of The Preakness, the second "jewel" in the Triple Crown) and TVG. The latter two I have not actually used, but they have been around for a while.

Each site promises that placing bets with their service is completely secure and legal, though they also issue heiney-covering warnings that wagering may not be legal in your particular state or locality. So, do with that information what you will.

It should be noted that none of the major wagering sites are particularly welcoming to horse-racing n00bs. And that's not only a shame, but a poor business decision on their part. The sport is slowly losing cultural relevance, and from the UI of these sites, you get the impression that the industry is perfecly fine with its slow descent into obsolecence.

So, I suppose that leaves we humble tech blogs with the job of filling in the information gap. Alas ...

First, make sure you are betting in the correct race. The Kentucky Derby will be run this Saturday, May 6 at 6:34 p.m. ET and it will be the 12th race of the day (note: there are 14 races that day, the Kentucky Derby is not the final race). Wagering opens on Friday, May 5, at noon ET and will remain open until betting closes just before the race begins on Saturday. The minimum you can bet is $2. (Setting "future wager pools" before the race is also possible, but that can be a complicated endeavor -- if you're new, just stick with day-of wagering.) 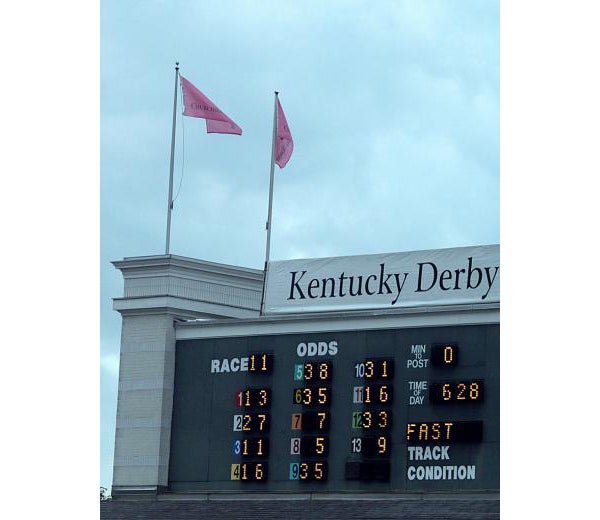 You can find a current (and evolving) list of Derby contenders here (though the lineup is subject to late changes). Each horse is bestowed by Churchill Downs with different odds. The longer the odds, the larger payout you can expect should you win. There are many different types of bets you can place, which also affect potential payout, but let's start with the simplest bet: the "win."

A win bet means you are betting your horse to come in first place (uh duh). This means you will win the odds.

The other two bets that beginners may want to consider are "place" (where you are betting that horse will come in either first or second) and "show" (you are betting that horse will come in first, second, or third). The payout maths get more complicated, as the show and place payments are based on the other horses that win. But you can just assume that you will get more money on a win bet than you will on a place bet, which will both pay more than a show bet. Kapish?

Here's an official Kentucky Derby explainer video on Win/Place/Show narrated by a woman who sounds like she's explaining betting to a 3-year-old.

And remember, you can place numerous different bets on a single race.

Additionally, there are a number of other "exotic" bets in which the math gets a lot more complicated, the rewards get bigger and the outcomes are more difficult to predict (if you're new, exotic bets are probably not for you). A more detailed explaination of bets -- basic and exotic -- can be found here.

So, which horses should you bet on? There are plenty of self-described "expert" handicappers available online who will dole out free betting advice of varying quality. Feel free to read up on what they have to add, but it can be just as fun to choose horses based on their names.

So, those are the basics. If you want to place some bets online, you are most certainly definitely in the clear. Feel free to knock back a few mint juleps and throw down some bucks and enjoy the most exciting two minutes in sports.