Ride Along With Gores Guggenheim for EV Innovation

By David Moadel
February 22, 2022
This story originally appeared on InvestorPlace

Colorado-based Gores Guggenheim (NASDAQ:GGPI) is really just a shell company, but it's still buzz-worthy because it's the company that is bringing Swedish electric vehicle (EV) maker Polestar to Wall Street. There have been some thrills and spills with GGPI stock, so get ready for a roller-coaster ride if you buy shares of the stock. 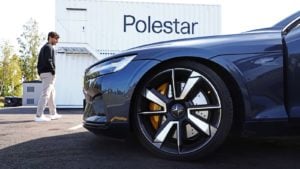 The buzz got louder recently after Polestar aired a commercial during the Super Bowl. The ad featured a model of the high-performance Polestar 2 EV.

Not only that, but the EV company plans to introduce the Polestar 3 premium SUV this year and will also probably launch the Polestar 4 SUV coupe in 2023.

That's not even the end of the story, as Polestar has more exciting news for drivers and investors alike. So go ahead and put your seat belt on, as the ride with Polestar will be bumpy, but never dull.

A Closer Look at GGPI Stock

Little did I know that anything related to the technology sector would suddenly be out of favor on Wall Street in early 2022. Entire segments of the stock market careened and corrected, making investing in EVs scary and difficult.

Yet GGPI stock held firm at $10, which happens to be the price at which the shares were trading before Gores Guggenheim announced that it would merge with Polestar So Gores' shares appear to have strong support at $10, which is comforting.

On Feb. 18, the stock closed at $12.22, and a comeback seemed to be in progress. If you're going to invest in Gores Guggenheim and Polestar, it's a good idea to keep an eye on the Nasdaq as well, as the exchange's rising tide tends to lift all boats.

In the Pole Position Globally

I promised some new and exciting developments surrounding Polestar. So let's start off with the automaker's big launch in South Korea.

You might not have thought of Polestar as an international EV maker. Yet the company's recent move into South Korea actually represents Polestar's 19th global market.

After the company began taking orders on Jan. 18 for the Polestar 2 in South Korea, it received more than 4,000 reservations in a single week.

That's an auspicious sign. Moreover, the first 2,000 of those 4,000 reservations were received within just two hours.

This event could be just a stepping stone on the route to a much more expansive global outreach effort. Polestar's ambition, apparently, is to have a presence in at least 30 markets by 2023 and to deliver 290,000 cars per year by 2025.

Doing OK in the UK

Speaking of having global operations, Polestar revealed that more than 280 engineers are members of the company's in-house research and development team based in Coventry, England.

In the coming months, that team is expected to grow to 500 employees.

Apparently, they've been developing a bonded aluminum platform for the forthcoming Polestar 5 EV. According to the company, bonded aluminum is lightweight and rigid, "offering superlative performance and environmental advantages."

Of course, a lightweight platform is expected to provide improved vehicle efficiency, hopefully without sacrificing power and performance.

Could there come a time, in the near future, when Polestar's vehicles are commonplace on roadways on every continent?

It's an ambitious dream, but anything is possible nowadays. Those who hold GGPI stock for the long term are betting on that dream and investing in Polestar's powerful yet efficient vehicles.

Strap in and brace for volatility, if you dare, as Polestar's international efforts prove that this EV startup is riding in the fast lane.

The post Ride Along With Gores Guggenheim for EV Innovation appeared first on InvestorPlace.