These Are the Tech Myths That Many People Still Believe in

Falsehoods like 'more megapixels is always better' and 'charging smartphones overnight kills the battery' continue to flourish, if you go by the response from the general public.

By Eric Griffith
January 24, 2019
This story originally appeared on PCMag

The folks over at HighSpeedInternet.com took a deep dive on the "mythtakes" (get it?) in tech to see just what the general public really believes. To do so, they created a master list of well-known tech claptrap, as well as some that may have once been grounded in reality but is no longer true.

To check them out, it surveyed "hundreds" of people in the U.S. to ask which of the major tech myths we believe. The top picks show just how far we have to go to manage expectations.

The most-believed myth: that more megapixels in a digital camera make for an instantly better picture. Eighty-six percent of the respondents went for that one; marketing hype doesn't help. But what really helps with a better photo is a bigger sensor inside the camera.

Next, 52 percent of respondents believe that charging a phone overnight somehow harms the battery. That's not true, and here are several other battery myths debunked. (Another: Don't freeze your phone to extend battery life!) We also enlighten the 17 percent of people who think you have to run down your smartphone battery completely before you can charge it. Nope.

The third biggest myth: Thirty-one percent believe that an airport X-ray will hurt the stored memory on their phone or laptop. This is a holdover from when people had film cameras, and the X-rays actually could damage the film. But they won't bother a hard drive. A giant magnet could though, so make sure to keep your phone and PC out of the MRI machine when you're getting a brain scan.

The list goes on, with people thinking you can't infect a Mac with malware and that overnight shutdown of a PC is a requirement. You should feel pretty superior if you don't believe any of these.

HSI went a little further and checked Google Trends to see what the most-googled tech questions are; and some are on its myth-list. Georgia residents apparently want to know whether baby monitors can be hacked -- and that one is very true. But as for falseness, Californians search quite a bit to see whether they can charge their phones in the microwave: That's a cruel prank gone mythical. Texans want to know whether their phones can listen in on them. Lots of states want to know about putting saturated devices in rice to dry them out -- but you'd actually be better off using synthetic silica gel desiccant packets (save all that you get in packages for just such an emergency, or buy a bunch). 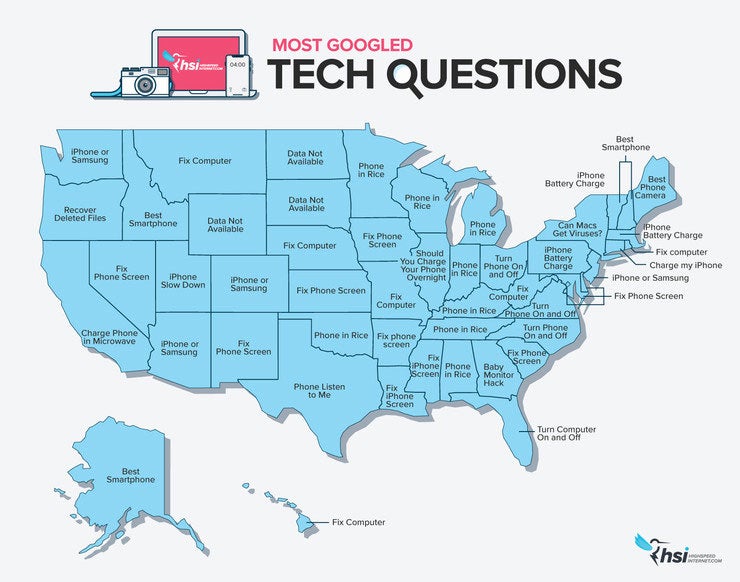