This Is Good News for the Banking Industry

After falling to record lows, a new positive attitude toward the banking industry is great news due to the effects on consumer decisions.

This story originally appeared on Sageworks

This data was collected in August as part of Gallup's Annual Work and Education Poll. Each year, Gallup asks Americans to rate 24 different business sectors on a five point scale from "very positive" to "very negative." They calculate the net ratings by adding the negative ratings to the positive ratings in each industry as a reflection of overall attitudes. 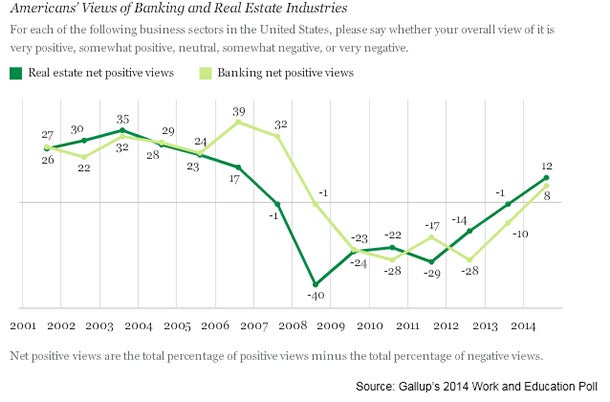 Many Americans were against programs like the Troubled Asset Relief Program (TARP), which aimed to stabilize the economy by providing assistance to banks in addition to credit markets and the automobile industry, according to Gallup. However, recent reports show that TARP did indeed help stabilize the economy, and the government has since recuperated the majority of the TARP disbursements.

What does all of this mean for your bank? The overall positive attitude towards the banking industry is great news due to the effects on consumer decisions. As a result of improved economic conditions, it is likely that banks will see an uptick in personal and business lending, a rise in mortgage applications, increased use of value-added services such as financial advisory services and a renewed emphasis on developing relationships.

It is clear from Gallup's annual poll that Americans' views of the banking and real estate industries are deeply connected to the state of the economy. The improving economic conditions are allowing banks to focus more on driving growth, developing relationships and gaining a competitive advantage.

While there is still plenty of room for improvement in overall attitudes towards the banking industry relative to other industries, the results of Gallup's poll last month show that consumer opinion of banks is on the rise, as more people are viewing the industry in a positive light.

Elizabeth Davis
Elizabeth Davis is a Marketing Associate at Sageworks, where she is responsible for content creation and strategy, market research and the development of product launch campaigns. Davis graduated Phi Beta Kappa from the University of North Carolina.