By Jason Daley
September 21, 2012
This story appears in the August 2012 issue of Entrepreneur. Subscribe »

If you had told a young Chelsea Sloan that as a grown-up she'd be working day in and day out with her older brother, Scott, she probably would have kicked you in the shins and locked herself in her room.

"He was definitely very mean to me," says Sloan, now 27 and sanguine about the sibling with whom she launched the used-fashion franchise Uptown Cheapskate in 2009. "We've become very good friends, and we have complementary talents."

They also have a good set of entrepreneurial genes. In 1992, their parents moved to Utah to start Kid to Kid, a franchise for used children's clothing and baby gear, which now has some 85 units in the U.S. and Portugal. That inspired Chelsea to think about a similar store for teens and young adults, but she shelved the concept upon starting college at The University of Utah, and similar ideas like Plato's Closet took over the market.

In 2008, while in Alaska taking a year off from school, Chelsea batted the idea around again in e-mails with Scott. When she returned to Utah, the two developed a business plan and spent the next year preparing to launch. At the same time, Chelsea was a full-time student pursuing a business degree.

The Uptown Cheapskate concept --reselling trendy, name-brand clothing brought in by customers who receive cash or credit for their castoffs--was a hit. The little sis and big bro have opened 15 units in 12 states and are developing nine more. We caught up with the Sloan sibs a couple of weeks after Chelsea's graduation to find out how they've kept franchising in the family.

What distinguishes Uptown Cheapskate from the competition?
Scott: What really sets us apart is our proprietary IMAP inventory-management software. It took more than eight months to develop, and it recognizes more than 4,000 brands and gives recommended price defaults that distinguish between things like whether Guess boots are leather or suede. We're constantly updating and modifying the brands database, and it automatically pushes those updates to our franchisees. No one else has anything like it.

Chelsea: It's especially helpful with male franchisees, who might not have a pulse on women's fashion. 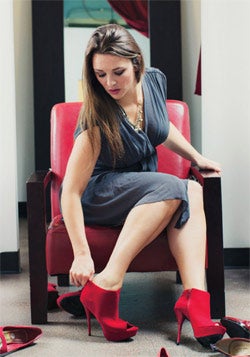 What's it like running a startup while attending college?
Chelsea: The biggest struggle was going to classes and being paired with people who don't have any real-world experience. It was frustrating. I was busy 80 or 90 hours a week, and it was hard to have everyone on the support team working around my school schedule.

But school did have a direct impact on the company. I took a class on social media and used Uptown Cheapskate as a case study and was able to apply what I learned while I was taking the class. Throughout college I learned about Google advertising, how to handle personnel and a lot of things that directly benefited the store.

Do you two really get along?
Scott: There are times when we don't get along as well as we should. We get frustrated, and it spills over the normal business line, and we argue the way you do in a family, not the way you argue with a co-worker.
Chelsea: We don't disagree very often on the direction the company needs to go or our franchise standards. We share a common view of where our stores need to be.

Have your parents learned anything from the two of you?
Chelsea: Oh, yeah. We taught our parents how to build a flex system for their merchandise, how to use Facebook and social media, and we taught them about loss prevention, which they didn't know anything about.

Have they given you advice?
Chelsea: Having our mother come into the stores gives us a unique perspective. It's good to have another set of eyes on the operation. The first time she came in, she told us we needed more mirrors. She was trying to shop and couldn't find a place to look at herself.

Does your family have a hip wardrobe?
Chelsea: You should have seen our dad the first time we put him in William Rast premium denim. And our grandma shops almost exclusively at our stores.