Meet the man behind thousands of dogs across the country--and soon, the world

By Jason Daley
March 10, 2010
This story appears in the February 2010 issue of Entrepreneur. Subscribe » 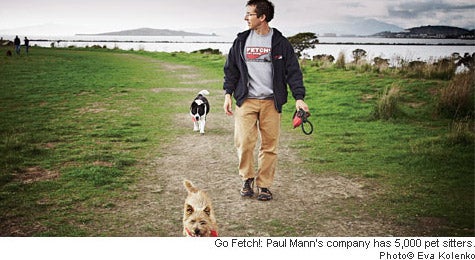 Dog walking is one of those in-between occupations--something you do to get through law school or while waiting for your script to be picked up. That also means it's often a fly-by-night service, where professionalism is the exception. At least, that's what Paul Mann decided back in 2002 when he was looking for a pet sitter in Berkeley, Calif.

"I went through the yellow pages, and I couldn't find anyone I felt comfortable handing my keys or my pets to," he says. "That's when I had my aha! moment."

Soon after, Mann, who had co-founded a high-tech job placement firm and founded a software company, bought a bag full of leashes and launched Fetch! Pet Care . His idea had legs--thousands of them. Within a year, his small company had 1,000 clients served by 70 pet sitters and two full-time dispatchers. In 2004, he franchised the concept, and today Fetch! has 200 franchisees and 5,000 sitters in 39 states, doing everything from taking pups out for a midday poop ($16 to $22 per visit) to boarding dogs ($40 to $50) to driving them to the vet ($15 to $22 each way). Some sitters are even trained in pet massage. This year, Mann hopes to take the franchise international, and partnerships with big names like AAA and Petco mean that Fetch! is bagging a bigger share of the $45-billion-plus U.S. pet-care market.

How did you "professionalize" pet care?
My previous tech jobs focused on systems, how to streamline operations to make them reliable, dependable and maintain costs. I automated all the back-office operations for Fetch!, and that helped us concentrate on building a large staff of professionally trained pet sitters. Within weeks, as chief dog walker of the company, there was more demand than I could handle.

Why did you franchise?
This is a real hands-on business; we're talking about live animals. The business is all about accountability. I wanted people with a stake in the business, not only financially but I also wanted them to put their heart and soul in building a sustainable business. We care for about 50,000 animals and we have to be on time. We're the FedEx of animals: We
deliver the pet-care world on time.

Have people cut back?
Pet care is the seventh-largest retail industry in the country. The estimate is 5 percent year-over-year growth; it defies the economy. Pet parents have to go to work longer and travel more, and they still need pet care. They're turning away from day cares, where their pet can be beat up by an alpha dog, and letting them stay in a safe and comfortable home territory.

Any strange requests?
People have had us cook really nice organic meals for their dogs. We've had a sitter who had to sleep in the owner's bed with three giant dogs. Once, an animal rescuer had to go away and we had to send in a team of sitters to take care of her 25 or 30 dogs. We do everything, even taking care of pet tarantulas.