How This Food Startup Built Its Business by Avoiding Retail

Dream Pops customizes popsicles for big clients, including Beats by Dre and Starbucks, and pockets up to $50,000 an event.

Dream Pops, the two-year-old makers of uniquely shaped plant-based popsicles, projects that at the end of this year, it will generate around $500,000 in revenue -- and remarkably has done so without selling, for the most part, to consumers.

Rather, the company has pursued a B2B strategy, and has already partnered with big brands, including Beats by Dre, Starbucks, Patron, Diane von Furstenberg and Bumble. Dream Pops has eschewed the typical route of consumer-packaged goods, which involves selling products in local stores before slowly gaining a footprint with more retailers.

"We realized that if we just packaged the product and slotted it in Whole Foods -- we would die a slow [consumer packaged goods] death," says David Greenfeld, co-founder and CEO of Dream Pops.

Instead, Greenfeld's team utilized 3D printing to create custom molds and shapes as well as new flavors for its business clients.

"With millennials paying for experiences over tangible things, we figured there might be a way to develop branded moments and experiences that centered around something all people love -- ice cream -- and generate revenue doing it to keep the business running," Greenfeld says. "We were effectively an outsourced food R&D lab that allowed select brands to reach their customers through something as intimate as food." 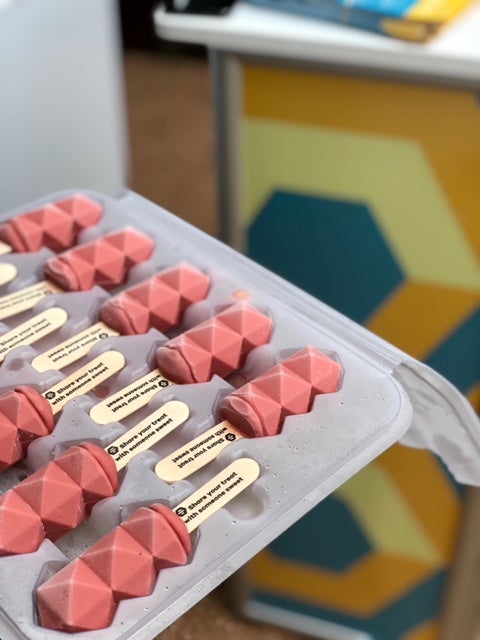 The company, which is partially self-funded and has the backing of angel investors, successfully pitched this concept to Beats by Dre, its first client. Dream Pops created treats shaped like the Beats logo that the Apple subsidiary then served at a Coachella party.

It then used this success to tailor its pitches to other brands with the message of "food as an advertising vehicle for shared experiences." Dream Pops sold itself as "a purveyor of branded moments and experiences and a new way to engage customers in real life," Greenfeld says.

Of course, a side benefit to this business -- aside from earning $5,000 to $50,000 for each event -- is that consumers at these events become more aware of the brand. As of July, the company released its popsicles to consumers and started selling packs of 10 on its website for $45.