7 Secrets of Running the Bar of Your Dreams

If you're serious about slinging spirits, here's the bonhomie behind building a better saloon.

There's a reason your pals rolled their eyes the last time you slurrily suggested you'd like to run your own pub: it's because while everyone says they could be the proprietor of the perfect pub, the very few who actually put their money where their merlot-hole is rarely succeed.

"We all have so many rookie mistakes," says Doug Quinn, legendary former bartender of New York's famed PJ Clarke's and current owner of the red-hot Hudson Malone saloon. "It's all about how you clean up your mess, once you've made it, but it can be a forgiving business if you treat your customers right."

Customer service keeps patrons loyal and thirsty. "As soon as you walk in, you're happy you came," notes comedian and co-host of the Race Wars podcast Sherrod Small. "It feels familiar and comforting -- full of stiff drinks and great people watching."

Entrepreneur spoke with Quinn, the 48-year-old veteran suds slinger, about what it takes to successfully maintain a memorable memory-maligner. Drink in his wisdom. First shot's on us! 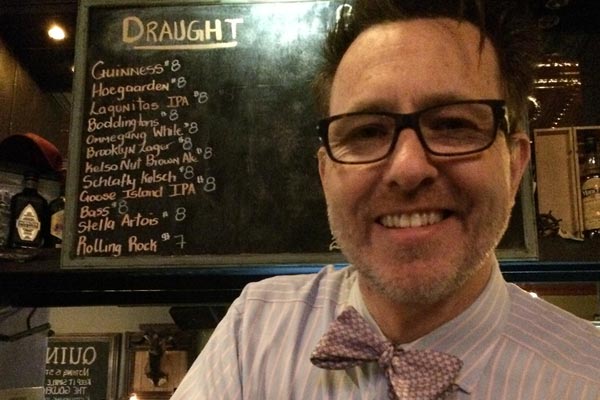 There's a reason that BJ O'HuffAFart's adjacent to the local Chili's doesn't inspire return visits from anyone than the neighborhood Keno-addict. Despite only opening in 2013, Hudson's giant vertical neon sign, ancient upstairs piano, a glowing jukebox and slew of Olde New York Ephemera makes it feel like it's been around longer than the 1900-built edifice it calls home. "It's supposed to be a classic Manhattan joint," Quinn says. "And they don't really exist today."

Quinn immediately acquired a loyal mix of white-collar wine-drinkers, blue-collar beer buzzers, artists, writers and actors and has the insane ability to remember everybody's drink. "I hadn't seen Doug in years, and when I bumped into him at the bar he remembered my drink," says 51-year-old Internet executive Brett Miller. "He looked me straight in the eyes and said "Stoli and soda' -- I was blown away."

"I kind of have a photographic memory," Quinn notes of his admirable ability to retain every customer's cocktail by choice and moniker by birth. "People tell me shit, and even if I haven't seen them in five years, it all pops up. Believe me: It's a blessing and a curse."

While his talent can't be taught, Quinn does recommend some total-recall cheats: "I tell my staff to write the names down of regulars until it's in their heads -- and the whole using-their-names-in-a-conversation thing does work. Say it over until you own it."

Related: Why Samuel Adams' CEO Wants Employees to Tell Him 'F--- You!'

3. Help the help to help themselves.

Quinn is a big believer in end-of-the-day accountability. "I try to have my guys make lists that we can discuss at the end of the day," Quinn says. "'What did I do well?' 'What did I screw up?' 'How am I gonna learn from this tomorrow?' 'Who came in tonight?' 'What should we know about them?' That kinda thing."

Hudson Malone's proprietor-in-chief maintains that the reason hotspots come and go, while classic hangouts stand the test of time, is due to the dismissive bitchy nature displayed by the doormen and servers at the former, vs. the amiable kindness inherent within employees of the latter.

People who drink sometimes drink way too much. Shocker, but how you deal with the results of over-imbiding can make all the difference between a situation peetering out or going nuclear.

"Don't take shit personally. It's the booze talking," Quinn advises. "If I'm told I'm a motherless cocksucker? I reply with "Who told you?'" And Quinn takes full accountability. "Hey, if you got 'em this way, you're babysitting," he says. "I've had to take clients home, not get 'em a cab, physically take 'em home."

Supplying your regular riffraff with booze-buffering bar snacks is one thing. But to keep them coming back? Make a good menu. And Hudson is in legitimate contention with any of the "best burger" boasters within this fair city.

"We had a learning curve," admits Quinn, who first tested his burger recipes out with a pop-up outpost weeks before the establishment even opened. "We'd overcook our prawns, not badly, but we did … so I just gave them out free to everyone at the bar. We did a lot of trial-and-error stuff. Once I perfected the grilled cheese we had, I knew we had something to offer."

Quinn maintains properly cooked pork chops and prawns recruits first timers more than the cocktails ever will, and it's another lesson learned if you want a successful saloon.

Quinn cites Elaine Kaufman of the never-to-be-duplicated Elaine's (RIP), Joe Allen (still alive!) and Smith & Wollensky bartender Patrick Ford (ditto!) as hall-of-fame hosts he's emulated. The three are honored by way of paintings affixed prominently around his place, by the way. The point being: If you're going to open up a joint, Idolize from afar, or even better, ingratiate yourself with the captains of this particular industry.

Quinn dismisses saloons that offer happy hour deals, as well as people who actively seek them when discussing the kind of clientele he cultivates. "People going to bars looking for drink specials, or two-for-one beer deals, don't f**king get it," Quinn says. "Money is meant to be spent."