Temporary Payroll Tax Extension Passes in Time for the Holidays 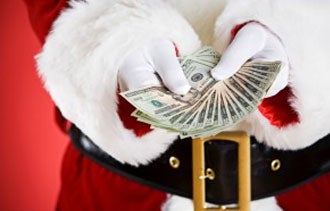 After weeks of political brinkmanship, a temporary extension of the payroll tax cut has finally been passed by Congress and signed by President Obama -- just in time for the holidays.

Without legislative action, the discounted Social Security tax rate of 4.2% would have reverted back to the normal 6.2% at the start of the new year. The compromise agreed to by the House and the Senate would extend the payroll tax holiday for another two months, or until Feb. 29, 2012.

Had the temporary payroll tax holiday not been passed, 160 million working Americans would have faced an increase of their tax bill come January. All week, President Obama had been ratcheting up the pressure on Congress to pass the bill.

"Because of this agreement, every working American will keep their tax cut -- about $1,000 for a typical family," Obama said in a statement after signing the bill into law. That "translates into an extra $40 or so in every paycheck."

The legislation was finally pushed through both houses Friday morning with a "unanimous consent" vote where Congressional leaders asked verbally whether there are any objections to the bill.

The payroll-tax cut is good news for small-business owners because it keeps cash in the pockets of their customers. What's more, business owners had faced the uncomfortable prospect of explaining to employees why their paychecks were smaller.

"The agreement to extend the payroll-tax cut is a win for small businesses and our job creators can enjoy the holidays without worrying about whether or not their taxes will go up," said Fred Baldasarro, spokesman for the U.S. Small Business Administration, in a statement. "Small-business owners want certainty and this deal ensures that we keep the wind at their backs."

The compromise legislation that was verbally passed by Congress Friday morning included a caveat to reduce the paperwork burden businesses have to bear in order to implement the temporary tax holiday. The version that the Senate passed earlier in the week would have been cumbersome for businesses to comply with because of a cap on the wages that would be eligible for the tax relief.

This $18,350 wage-limit cap was unrealistic for businesses to be able to comply with in time, according to Pete Isberg, the president of the National Payroll Reporting Consortium, who wrote a letter about it to the Congressional leaders at the start of the week. "With the first of January now only two weeks away and payroll departments trying to meet year-end compliance mandates and reconciliation, there is simply insufficient time to implement this major change in withholding requirements," the letter said.

The temporary payroll-tax cut extension finally agreed to by the House will allow employers to process the tax changes with the current accounting system, according to a statement on House Republican Speaker John Boehner's web site.

The legislation also includes measures to extend unemployment insurance, consideration for the construction of the Keystone XL pipeline to transport oil from Alberta, Canada, to the U.S., and extension of any change in Medicare doctor payments.

While Congressional leaders breathed a sigh of relief to get the payroll-tax credit temporarily extended through the holidays, there was still a general frustration with the inability of Congress to pass a more long-term solution.

"What kind of an administration concerned about the long-term health of the economy and entrepreneurs and small business (so they claim) manages tax policy months at a time, [and] leaves the expiring tax rates sitting with no decision?" said Bill Dunkelberg, chief economist for the National Federation of Independent Business, in an email to Entrepreneur.com. "Entrepreneurs make plans that cover years, tax treatments are critical to these decisions and nobody knows what their tax rates will be in a few weeks."

President Obama is already putting the pressure on members of Congress to come up with a full-year tax-cut holiday when they return from the holidays.