Why a great business idea is only the beginning

By Tim Beyers
June 8, 2010
Opinions expressed by Entrepreneur contributors are their own.

Jeffrey Bussgang likes crazy entrepreneurs. Twitter's Jack Dorsey, LinkedIn's Reid Hoffman and Sitrris Pharmaceuticals' Dr. Christoph Westphal all share what Bussgang, a partner with Boston-based Flybridge Capital Partners , calls paranoid optimism. He defines it as an almost-arrogant belief in a world-changing idea mixed with a healthy fear of competitors. "You rarely see those two words together, which is why I like them," Bussgang says. "They really distill the essence of the great entrepreneurs."

He should know. Before he was a venture capitalist, Bussgang co-founded Upromise, now part of Sallie Mae and the nation's largest private source of college funding contributions. In his new book, Mastering the VC Game , Bussgang offers a blueprint for entrepreneurs hoping to get funded: Be a paranoid optimist.

But even that may not be enough, given the state of today's venture capital market. Total VC dollars invested fell 39 percent between the first quarter of 2008, before the recession began, and the first three months of 2010, according to data supplied by PricewaterhouseCoopers and the National Venture Capital Association.

VC firms have gone tight-fisted, and limited partners--the investors who supply capital to private equity funds--are skittish, afraid of being burned again after suffering a decade of negative returns. Mix in a contentious debate over the taxability of profits derived from successful venture capital investments, otherwise known as carried interest, and entrepreneurs are being forced to clear hurdles not seen since the 1980s, says Roger Novak, a partner with Novak Biddle Venture Partners in Bethesda, Md. "I think we're going back to the old days, and better companies are going to be born."

In other words, venture capitalists are being more discerning about where and with whom they invest. Here are three ways to make sure your business passes the sniff test. 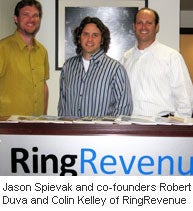 Jason Spievak and co-founders Robert Duva and Colin Kelley founded call-tracking software company RingRevenue in September of 2007, but it would be at least six months before any of them wrote a line of code. And it would be 18 months before the company received outside funding of any kind.

Much of that time was spent planning and talking with prospects; the founders didn't want to build a solution before defining the problem, which they believed was big. Advertising affiliate networks were losing revenue each time a customer clicked on a digital ad but completed the transaction by phone. RingRevenue would fill the gap with technology, but only if affiliates could agree on the concept they had in mind.

"Before we were going to commit all of our time, career, dollars and resources to it, it was important to [know] enough about the customers and their needs that we could feel good that we were getting it right the first time," Spievak says.

Each meeting brought changes to the design. But by asking prospective customers for feedback and then building to spec, RingRevenue created its own market. "We wanted to make sure that we understood the formula for growth, that we had satisfied customers and a scalable model," Spievak says. Investors were impressed. RingRevenue closed a $3.5 million initial round of venture capital funding in June of 2009.

2. Get a Big Idea
If there's a model for the sort of crazy entrepreneurs Bussgang admires, it might be the team at PhoneHalo . The company's wireless technology plugs into a smartphone, making it a hub for preventing computers, iPads and other networked equipment from getting lost or left behind. But the vision for what it could be is much bigger. 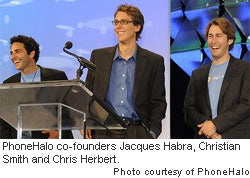 "Imagine that everything that's valuable to you in your life is always connected to the network. And imagine down the road if every item in your refrigerator was somehow talking to the network so when you were low on milk, if it goes through PhoneHalo's infrastructure, it can update a to-do list right as you're in the grocery store, all on the fly," says CEO Jacques Habra. Crazy? Sure, but according to Bussgang, the ability to press forth in the face of naysayers is what makes a great entrepreneur.

PhoneHalo was still shopping for venture capital funding as of this writing. And yet Habra and co-founders Christian Smith and Chris Herbert are confident they'll eventually find the right VC partner.

"Since this is our baby, it's easy to feel rejected and bruised by a no," Habra says. "In reality, that time with an investor is hugely valuable: If you ask the right questions and apply the feedback to your business unemotionally, you make the company that much more investable and likely to succeed."

3. Work Your Network
Finally, the venture capitalist who doesn't know you isn't likely to partner with you. "They see so many referred-in deals that it just doesn't make sense for them to spend much time on the ones that come in over the transom," says Spievak.

He and his team were approached by potential venture capital investors in late 2008, during the height of a global financial meltdown, in part because backers of his earlier venture, publicly traded CallWave, earned back 30 times their investment following a 2004 public offering.

RingRevenue also had a backlog of angel investors willing to help with the company's initial round of funding, if necessary. "That really helped us move our early dialogues with potential VC investors away from 'How green is your money?' to 'Tell us about your experience in building software companies,'" Spievak says.

What do you do if you don't have a track record or existing venture capital relationships? PhoneHalo's team turned to family and friends for seed funding. Self-funding is also an option. But your best bet may be to expand your network.

"I would use LinkedIn, I would use the other tools, and I would reach out to your networks," advises Spievak. "I would talk to other entrepreneurs who have raised capital. I would do whatever you can to get an introduction to the investor you want to speak with rather than just firing off business pitches."

Once you get the meeting, don't just perform. Know your audience, says Bussgang. "[Find out] who that person is that you're pitching and what they typically invest in."

"It is like an audition," he says. "The whole goal of an audition is to get a call back."