This philosophy even guides the development of Facebook's virtual reality products.

While virtual reality has so far been a solo experience, the Facebook and Oculus teams are working to make it a more collaborative one.

"We're here to make virtual reality the next major computing platform," Facebook founder and CEO Mark Zuckerberg said during a keynote at the Oculus Connect 3 conference on Thursday. "We really want our software to be built with people at the center of it."

Related: How to Immediately Connect With Anyone

In the brief time Zuckerberg spent as a Harvard undergrad before dropping out to launch Facebook, he pursued a double major in computer science and psychology. Among the psychology basics he learned is the fact that "the brain is specifically wired to care about people first," he said. "We should build software and experiences that follow the way that our minds work and the way that we process the world."

This is great advice for anyone designing a product or service: Make sure to prioritize human interaction. Whether you're creating a marketing campaign or a piece of hardware, don't lead with the technical description of what your product does. Think about how what you've built will allow people to connect with others and go about their lives. Don't let what you're selling get in the way of someone's natural behaviors and instincts. Enhance them.

Zuckerberg explained that the way in which tech tools are structured today -- as suites of apps -- will not last long into the future. When a group of people is communicating or working together, they often toggle between a chat app, a video call and a shared document interface, for instance. The need to switch from one app to another doesn't produce a seamless experience, and it makes each interface the focus, as opposed to the people working within it. 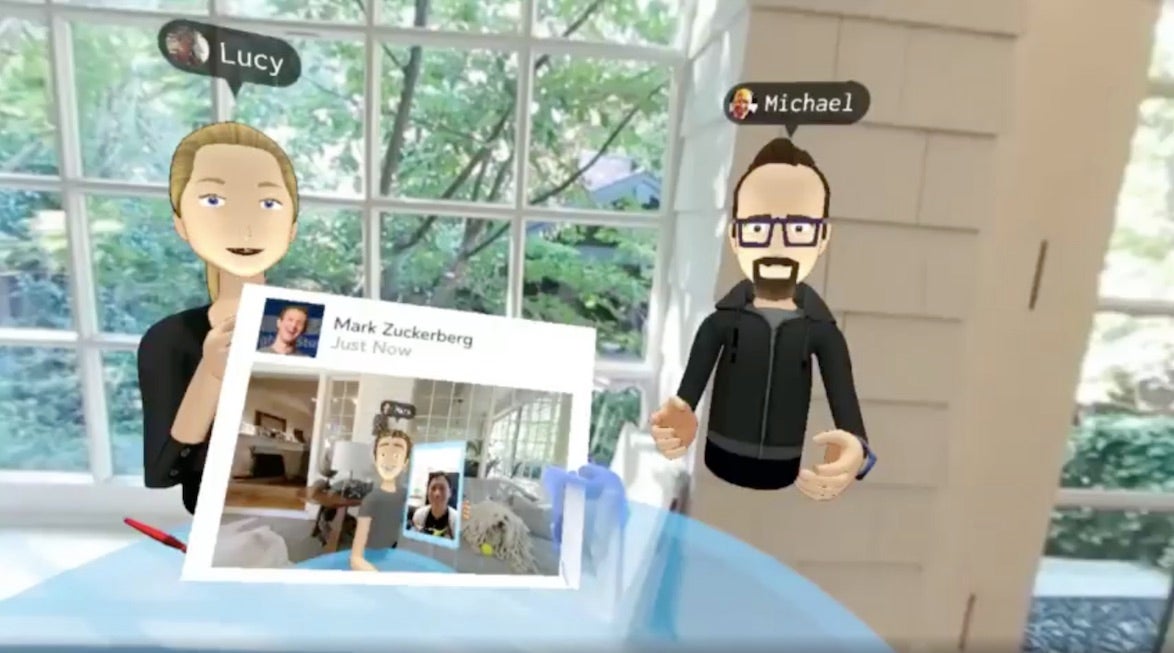 A demonstration transported Zuckerberg and two colleagues to his living room. He was able to video call his wife, Dr. Priscilla Chan, within the virtual space. Zuckberg, in avatar form, then took a selfie with his wife inside the Facebook Messenger window.
Image credit: Twitch

"Virtual reality is the perfect platform to put people first, because of presence. You feel like you're really there, in another place, with people," Zuckerberg said, explaining that VR allows groups of people to do more together when compared to multiple apps.

Meanwhile, Zuckerberg also announced that Oculus has begun development on a standalone VR headset that is more powerful than a mobile phone but won't be tethered to a PC.