The 20 Best Airlines In the World

Stay informed and join our daily newsletter now!
Benjamin Zhang and Sara Bower
June 30, 2014 10 min read
This story originally appeared on Business Insider
With fees on the rise and service quality on the decline, flying commercial these days can be an unpleasant experience. Fortunately for fliers, some airlines still put customers first.

We found the world's best airlines for flying economy class, and, for the second year in a row, Singapore Airlines has taken the top spot on our list.

To create this annual list, we devised a ranking system based on the two most important factors for a pleasant trip: an enjoyable experience in the plane, and timely departure and arrival. We looked at dozens of major international airlines that fly long-haul routes, and evaluated the quality of the economy-class flying experience (based on data from leading airline reviewer Skytrax) and the airline's on-time performance (based on data from Flightstats.com).

We combined data from the two categories to come up with an overall score for each airline. Ratings are out of 100 points.

Though the Lufthansa-owned airline has been rocked by a protracted series of labor disputes, its high level of service seems to have remained intact. The Austrian flag carrier boasts a fleet of newly renovated long-haul Boeing 767-300ER and 777-200 jets flying out of its Vienna base.

Economy fliers gave the Star Alliance member high marks for its efficient and effective service as well as the wealth of on-board dining and entertainment options. While the airline may provide good in-flight service, it is Austrian's stellar on-time performance rating of 82 that pushed it past many of its contemporaries to take the final spot on our list. 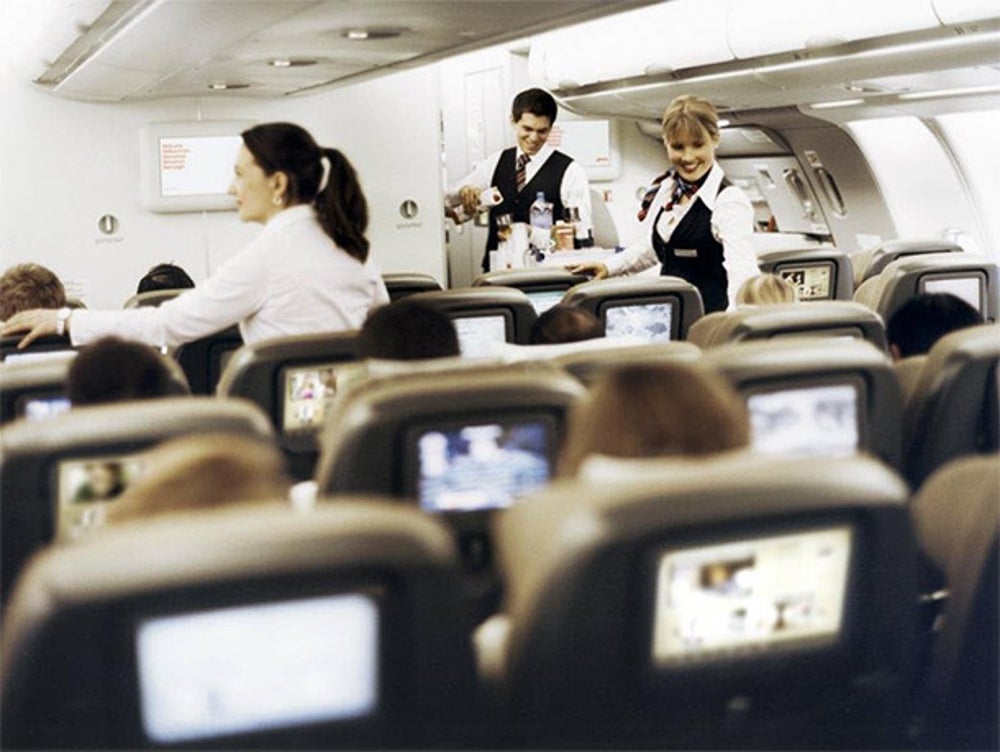 Another member of the Lufthansa corporate family, Swiss International Air Lines emerged in 2002 from the remnants of the now-defunct Swissair. The Basel-based airline employs a relatively young fleet of Airbus A330-300 and A340-300 wide-body jets for long-haul routes.

Though some fliers found economy-seat comfort to be lacking, most praised the cabin crew for its friendly service and the airline's wide assortment of complementary adult beverages. Like its corporate cousin Austrian Airlines, Swiss, too, differentiated itself from a crowded glut of competitors by living up to its national stereotype and posting a superb 83 on-time rating.

As the biggest airline in billionaire Richard Branson's portfolio of Virgin brands, Virgin Australia has experienced massive growth in the Asia-Pacific market since its founding in 2000. 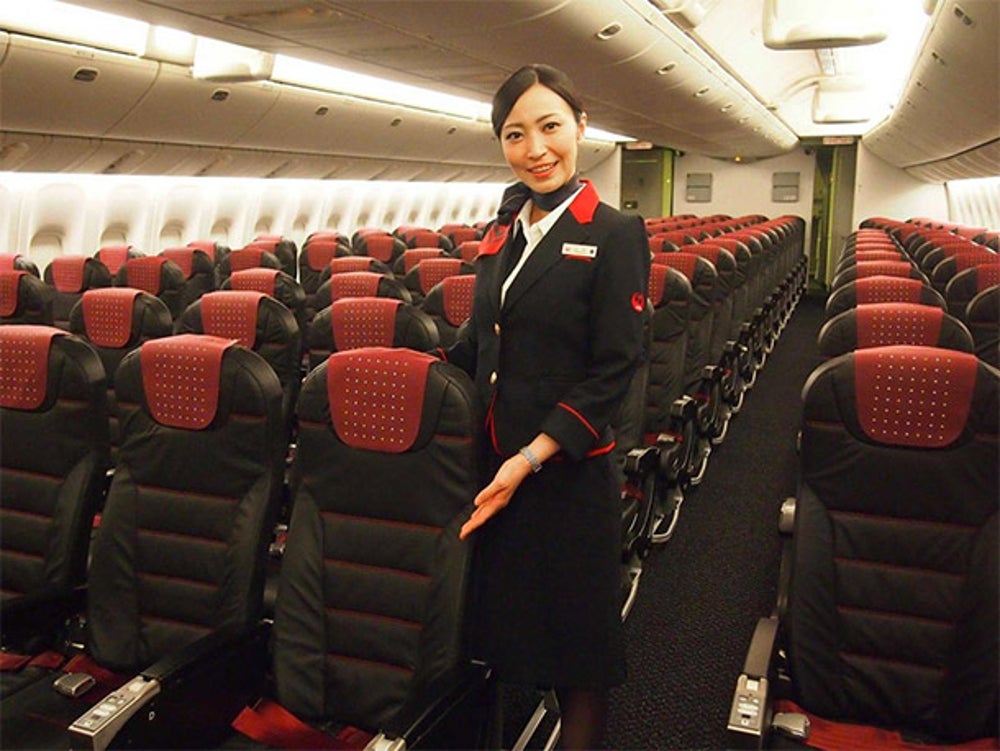 For more than six decades, Japan Airlines has been the benchmark for high-quality commercial air travel in Asia. Economy fliers on Skytrax praise the Oneworld Alliance member for its attentive service, spacious seats, and generous meal selections.

As it has for much of its history, JAL features a Boeing dominated long-haul fleet with the crown jewel being its large stable of 787 Dreamliners. 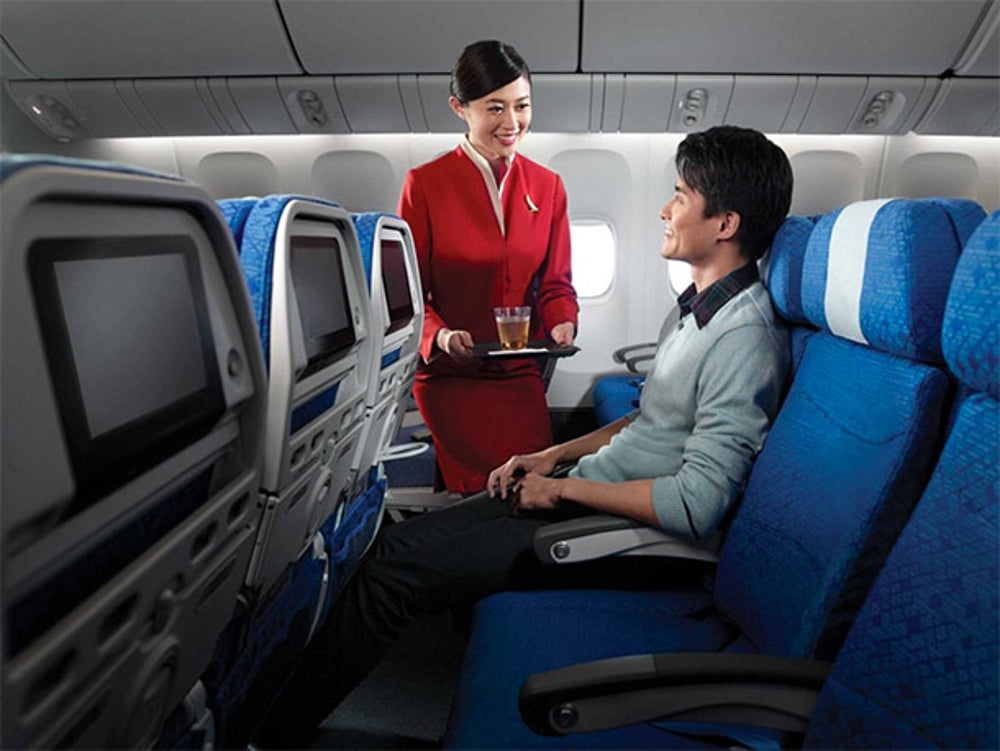 Cathay Pacific managed to receive a perfect score from Skytrax for its in-flight entertainment, and it scored high marks across the board for seat comfort, service, and meals.

However, Cathay was knocked down on our list by a low on-time performance score of 69, due to congestion and erratic weather at its Hong Kong base. 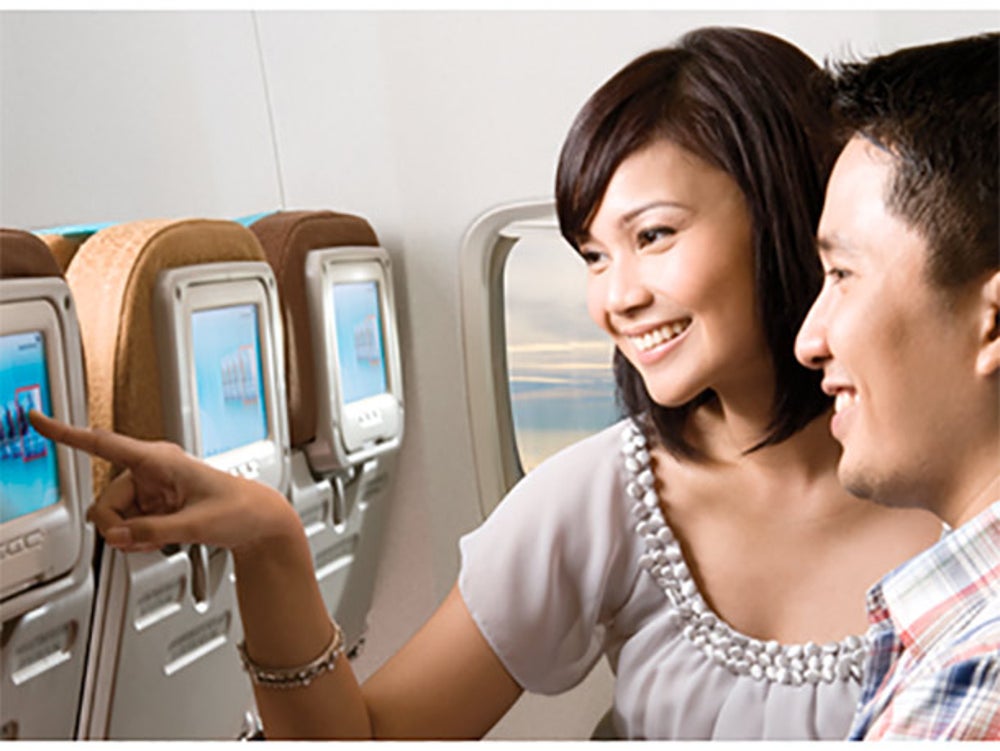 After being deemed unsafe to fly into the European Union from 2007 to 2009, Garuda Indonesia has experienced a dramatic turnaround in recent years. The Indonesia flag carrier has undertaken extensive fleet renewal and service-improvement measures to regain the trust of both fliers and safety regulators.

Economy fliers have raved about the airline's comfortable seats and selection of southeast Asian cuisine. This March, Garuda became a full-fledged member of the Skyteam global airline alliance. 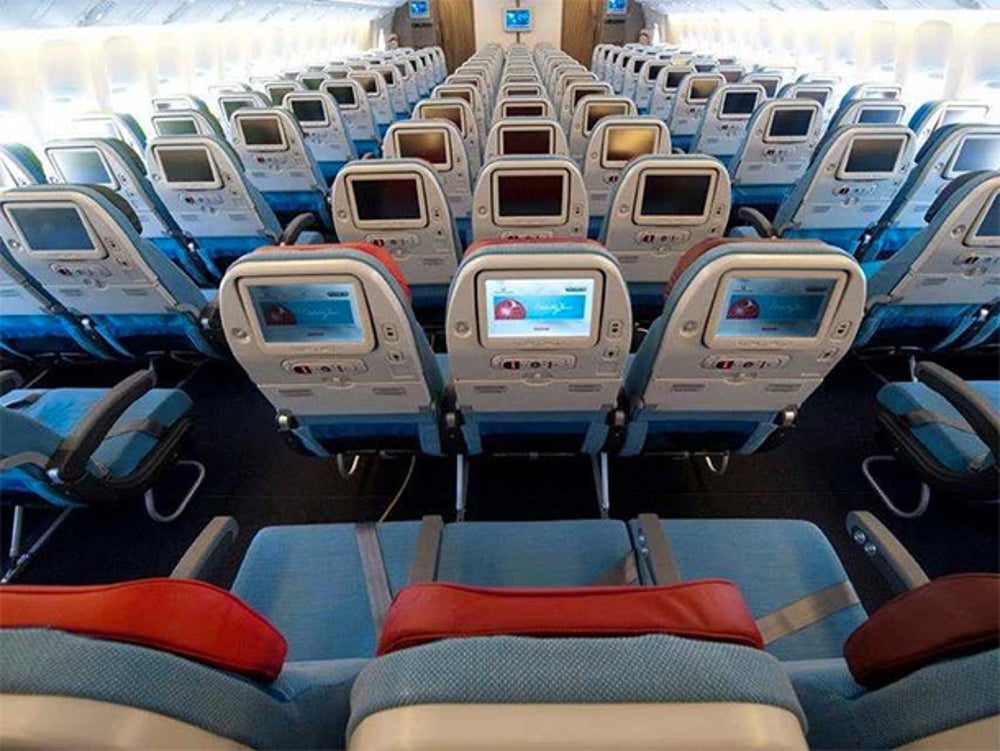 Turkish Airlines is the flag carrier of Turkey with a hub in the increasingly popular travel destination Istanbul. The airline breaks records with its available destinations, flying to over 100 countries and over 200 cities worldwide.

The airline is extremely fast-growing, is a member of Star Alliance, and has won Skytrax's award for Best Airline in Europe for three consecutive years. 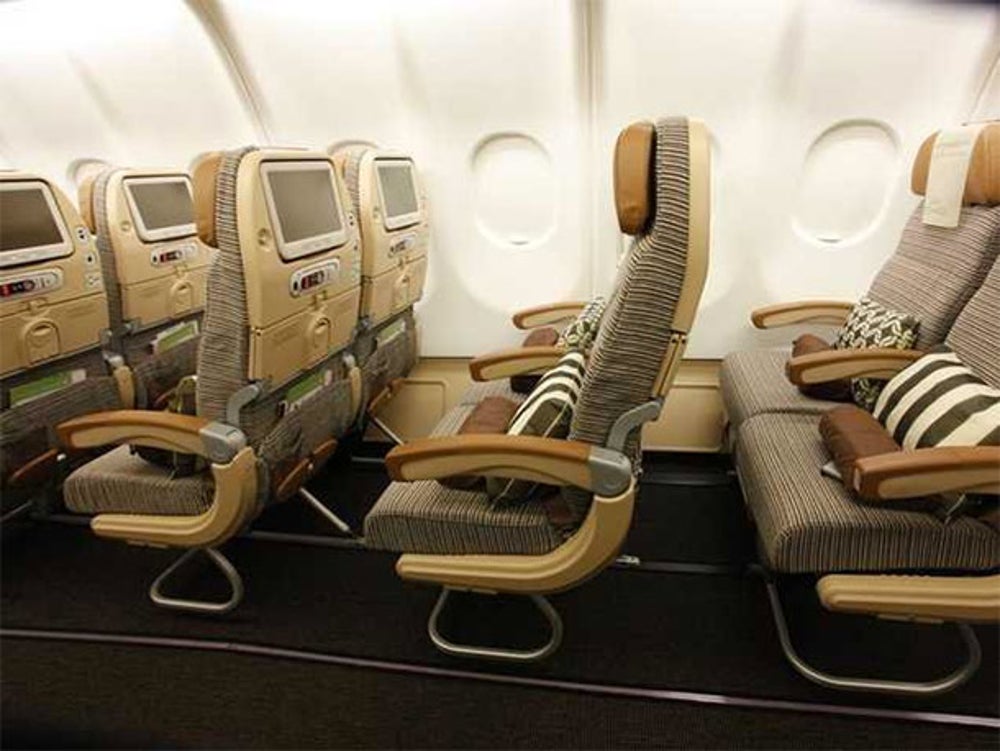 Abu Dhabi-based Etihad airways is the flag carrier of the United Arab Emirates, with its Airbus and Boeing fleet traveling to about 96 destinations. Some of its special features include noise-reduction headphones and mood lighting in the cabin that's adjusted to keep passengers well rested. 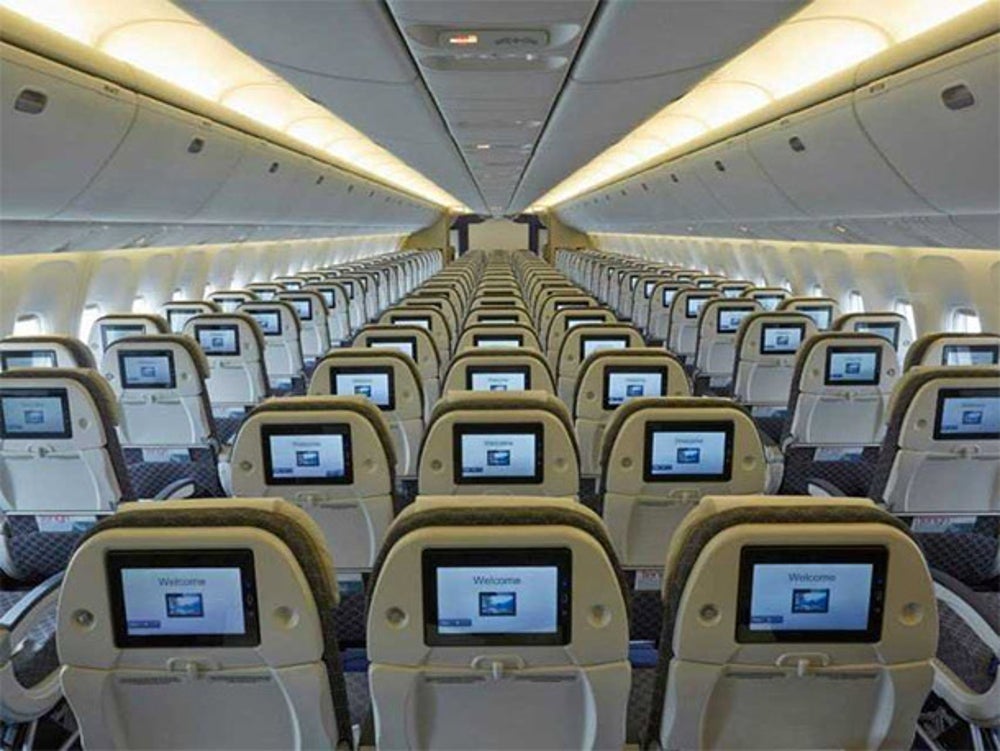 Air Astana may be the least-known airline on this list, but the Kazakh flag carrier has quietly carved out a sterling reputation for providing a quality in-flight experience along with an incredible on-time service record. Scoring a remarkable 89 on-time performance rating, Air Astana benefits from a combination of solid management, a young fleet of aircraft, and a network consisting of less congested airports.

The Almaty-based carrier depends on its fleet of narrow-body 757-200 and newly refurbished 767-300ER wide-body jets to handle its long-haul duties. 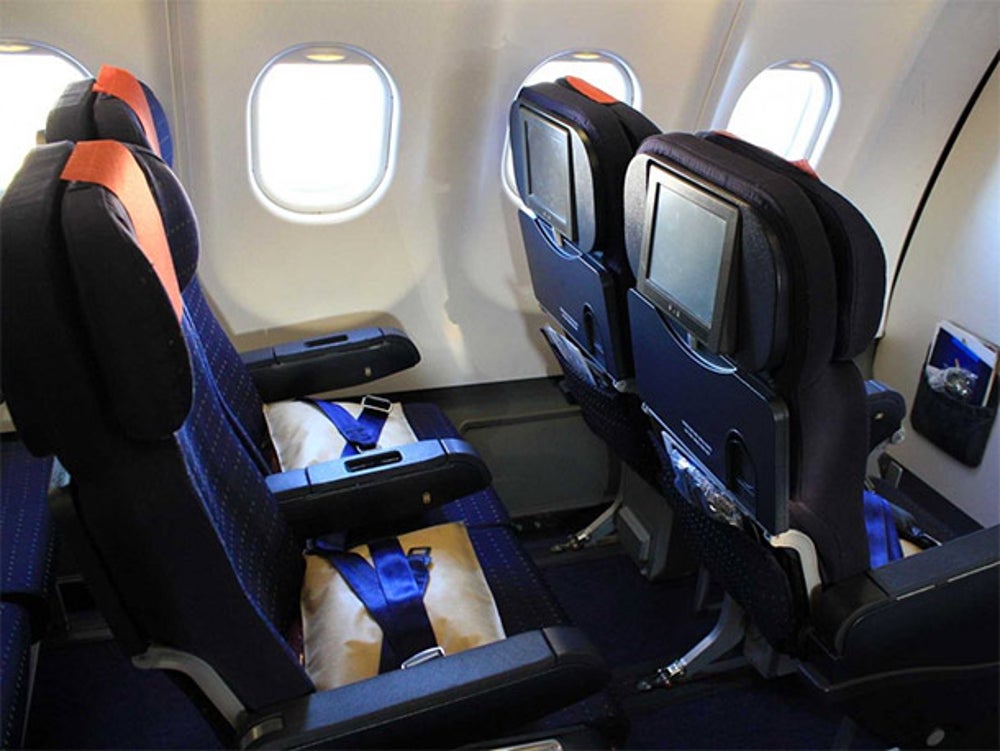 South African Airlines is Africa's most acclaimed airline and connects to over 42 destinations worldwide from its Johannesburg base. The Star Alliance member received consistently good scores across the board from Skytrax with reviewers particularly impressed with the airline's seat comfort and wide selection of meal and entertainment options. 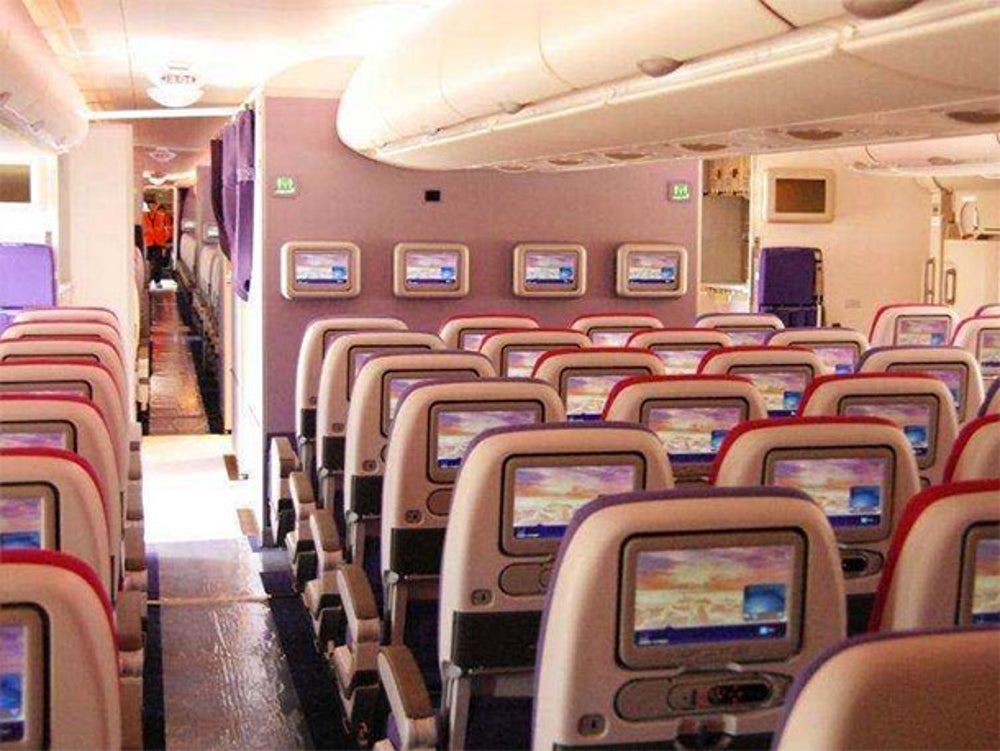 Thai Airways has long been an industry leader for quality service. So it's no surprise to find the Thai national carrier so high up on our list. Though its most heralded products are its business and first-class services, most fliers found their economy seats to be of high quality as well.

Economy fliers on Skytrax also noted the crew's friendly demeanor and delectable dining options. However, some customers found the lack of seat-back-mounted personal entertainment displays on some of the fleet's older Airbus and Boeing jets to be disappointing. 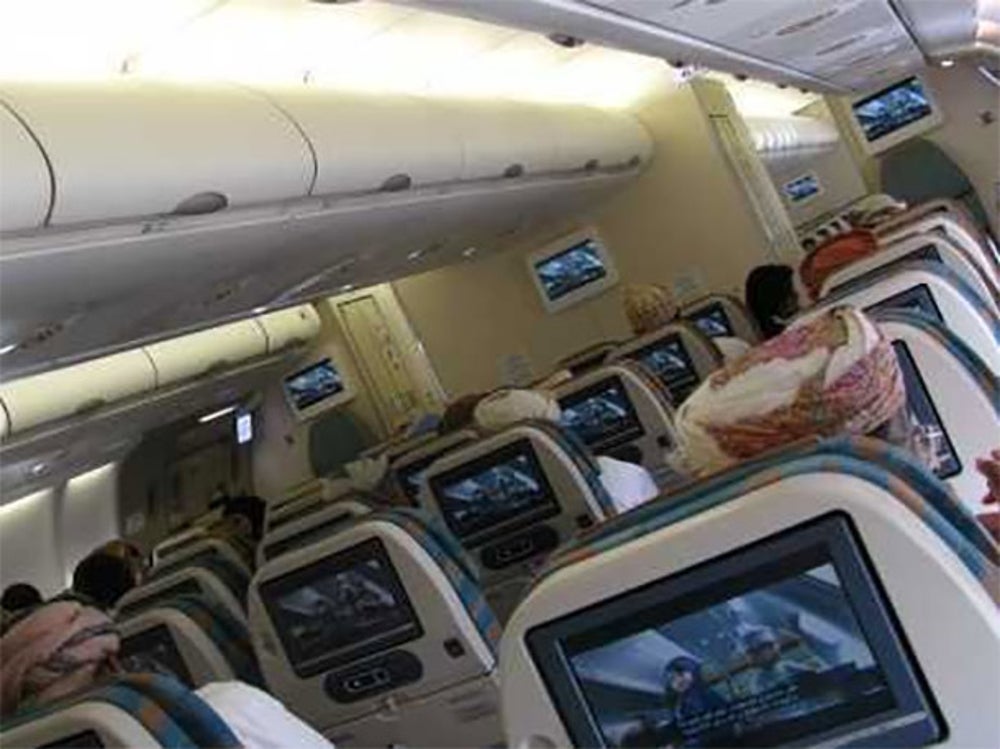 Muscat-based Oman Air is the smallest of the Middle Eastern airlines to appear on our list, but it's undergoing a period of rapid growth that the airline hopes will allow it to catch up to its better-known competitors. 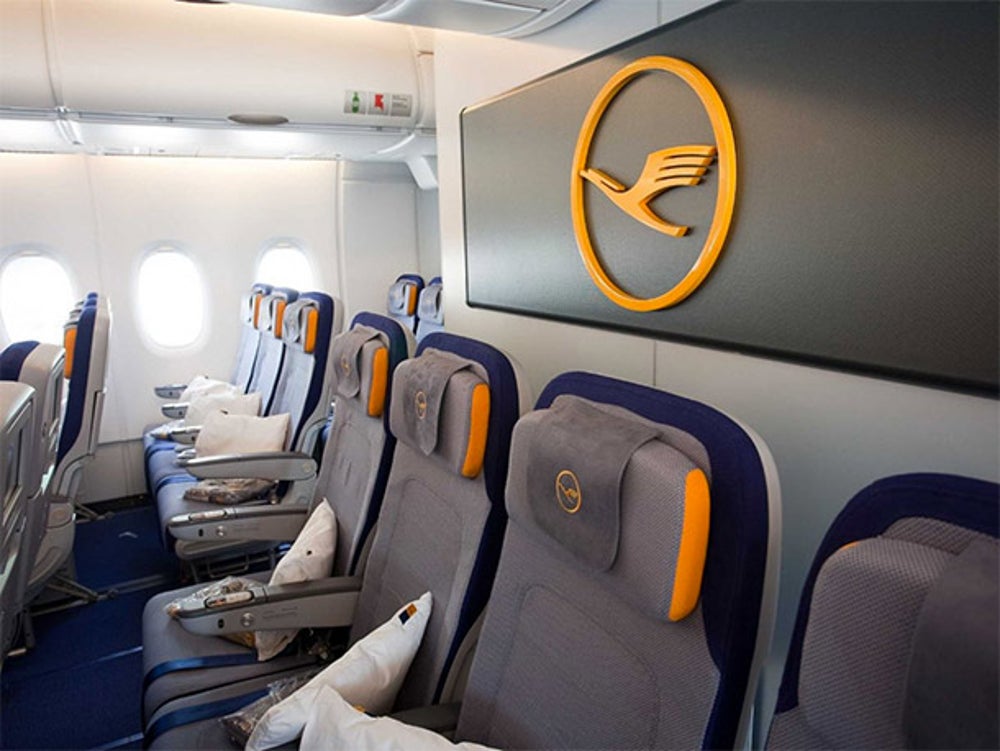 Europe's largest airline has undergone significant budget cuts in recent years, but its service and overall quality is still exceptional. In fact, Lufthansa comes close to the top of our list by receiving solid if not spectacular scores across the board.

For the most part, Lufthansa's long-haul service is very good, but, for the best results, it would be wise to aim for the fleet's newer A380 superjumbos and 748-8 Intercontinentals. 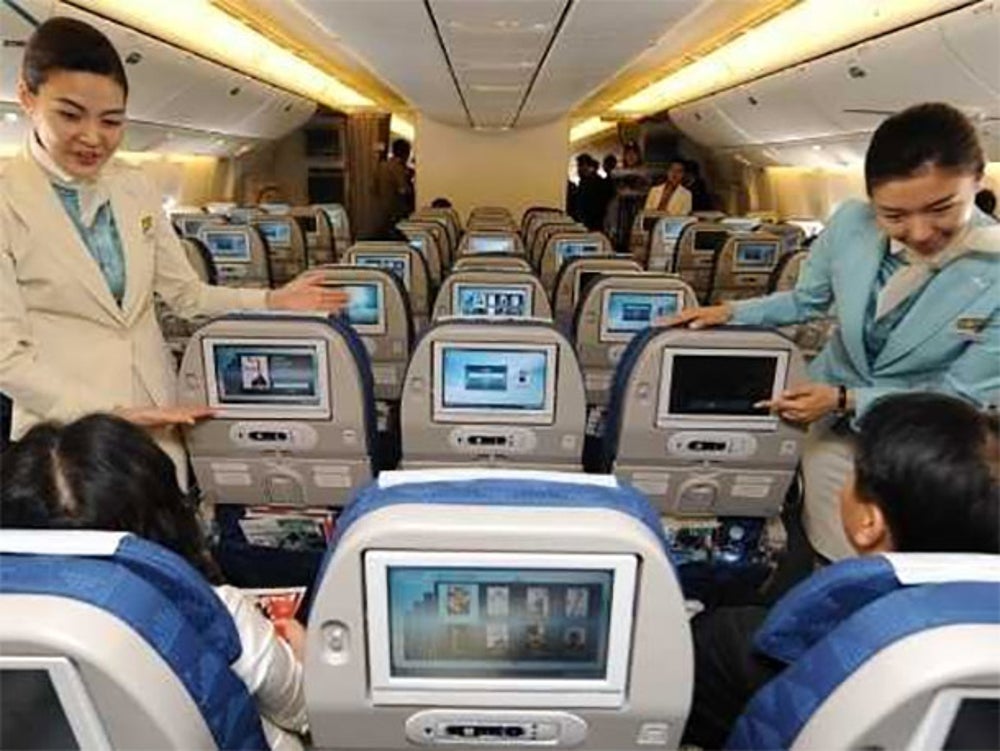 After suffering a series of tragic crashes in the late 1990s, Korean Air has rebounded to become one of the rock stars of commercial aviation. Over the past decade, the Seoul-based carrier has made drastic changes to its management and crew-resource practices.

Korean Air flies a large long-haul fleet made up of Boeing 747 and 777 jets as well as Airbus A330s and the A380 superjumbo. Economy fliers gave the Skyteam member rave reviews for its spotless cabins and copious legroom. 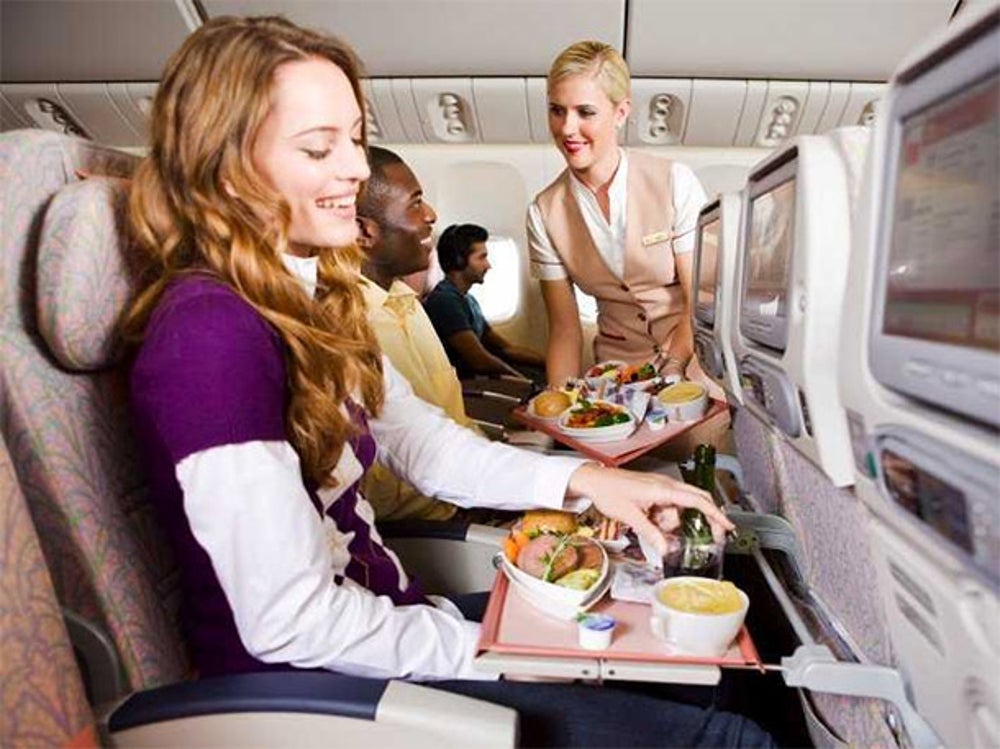 Over the past 10 years, Dubai's Emirates has developed into one of the world's premier long-haul carriers. Operating almost exclusively through its palatial hub at Dubai International Airport, the carrier boasts the world's largest fleet of Airbus A380 super jumbos and Boeing 777 wide-body jets. 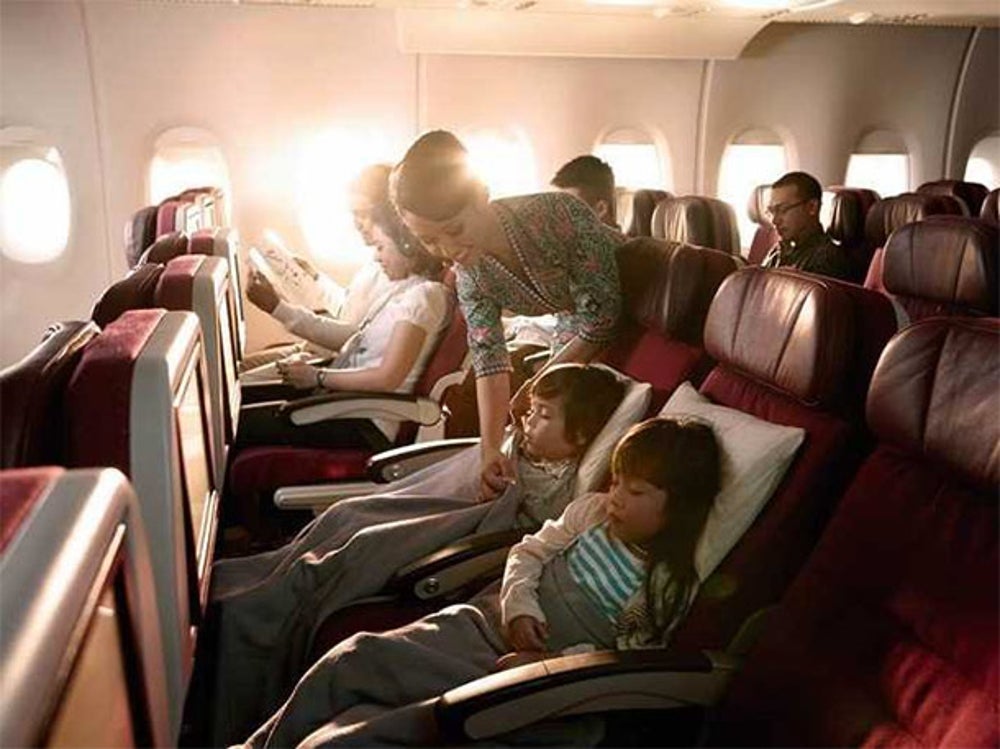 Though Malaysia Airlines' image has taken a pounding over the past few months because of the tragic disappearance of flight 370, the carrier's decades' worth of sterling service should not be discounted. Because of the incident, and mounting financial losses, the world's most talked-about airline is now in the midst of a management shakeup and fleet-renewal process.

In spite of the upheaval, the carrier maintains its seat as one of the best airlines in the world. Malaysia has consistently impressed Skytrax reviewers with its in-flight experience, bagging a perfect score in service efficiency.

As one of two major South Korean airlines, Asiana stays in our No. 4 slot and maintains Skytrax's five-star rating. Like Malaysia, Asiana has had to weather a wave of controversy after one of its Boeing 777s crashed upon landing in San Francisco last year.

Though the official cause of the accident is under investigation, emergency services have heaped incredible praise on Asiana's heroic cabin crew whose brave and efficient performance saved the lives of countless passengers. Such attentive service is reflected in Skytrax's ratings with reviewers giving the airline top marks for service efficiency and seat comfort. 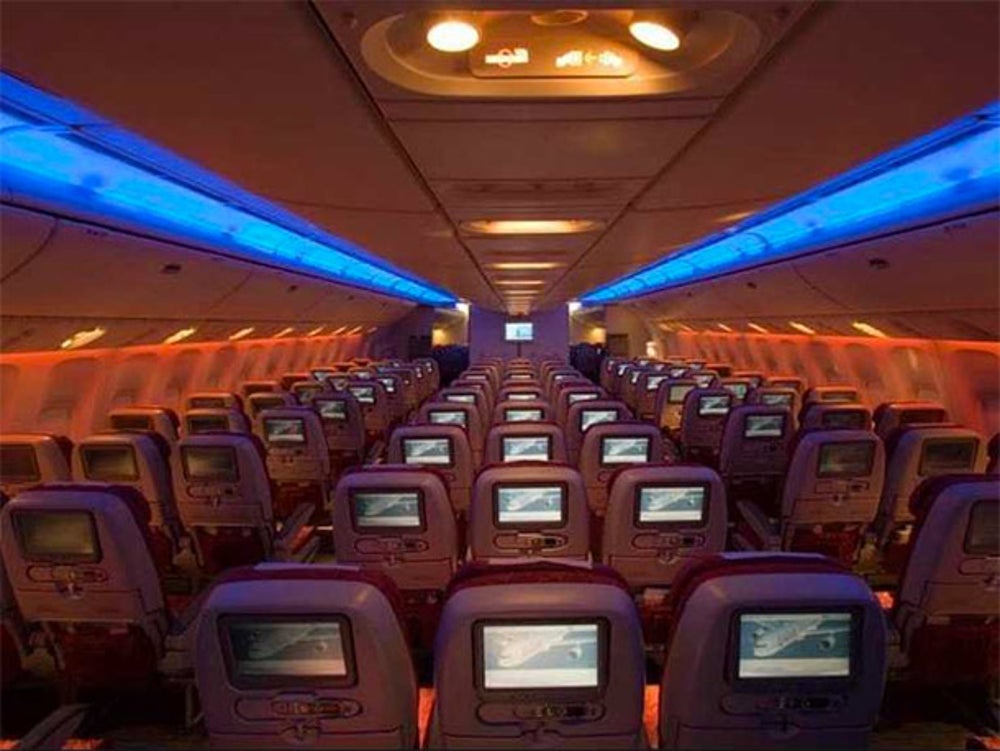 Qatar Airways earned perfect scores for both seat comfort and in-flight entertainment. Economy class guests get to enjoy features like smartphone and tablet connectivity to their personal screens. The airline links over 125 destinations across the globe and is expanding its services from Qatar to 50 new destinations including direct flights to Los Angeles, Miami, and Dallas.

While a third-place ranking on our list is nothing to snicker at, Qatar could have easily finished at the very top had it not been for a somewhat unimpressive 71 on-time rating. Much of this can be attributed to the airline's former base of operations: the overcrowded and antiquated Doha International Airport. However, the single-runway Doha International has since been shuttered and the airline's recent move to the brand new and much larger Hamad International Airport should see these ratings skyrocket. 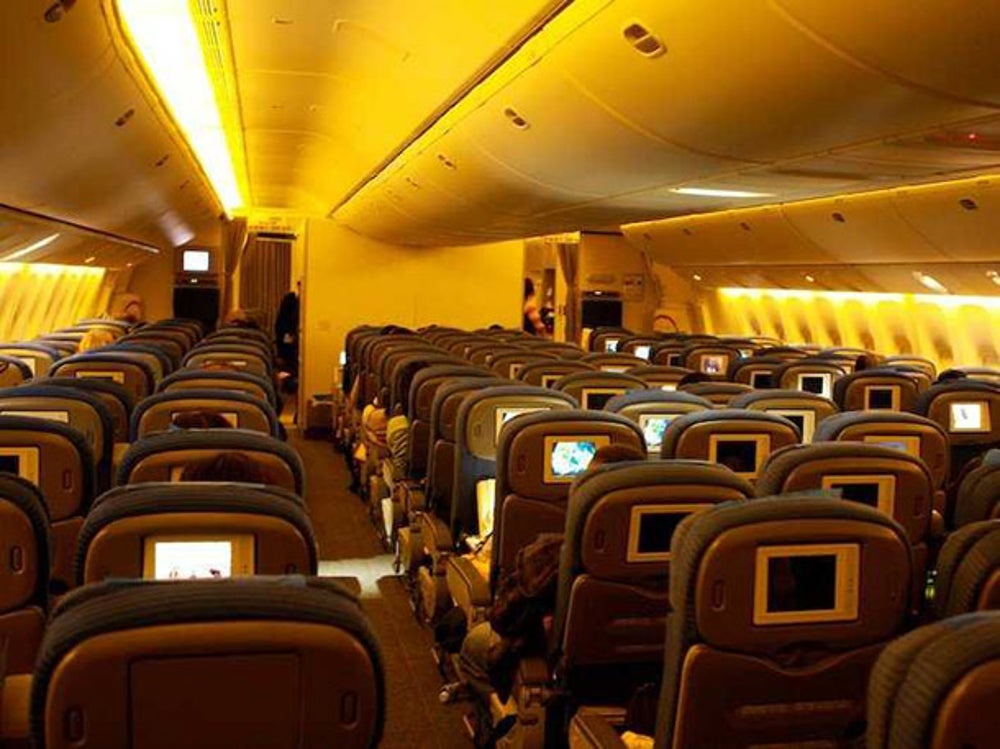 All Nippon Airways is the largest international carrier in Japan and home to the world's largest fleet of Boeing 787 Dreamliners. ANA drew high praise from Skytrax reviewers across the board; scoring near perfect scores for cleanliness, service, and safety. Many of its planes feature slide-forward-style reclining seats that increase overall privacy, as well as power and USB outlets even in economy. 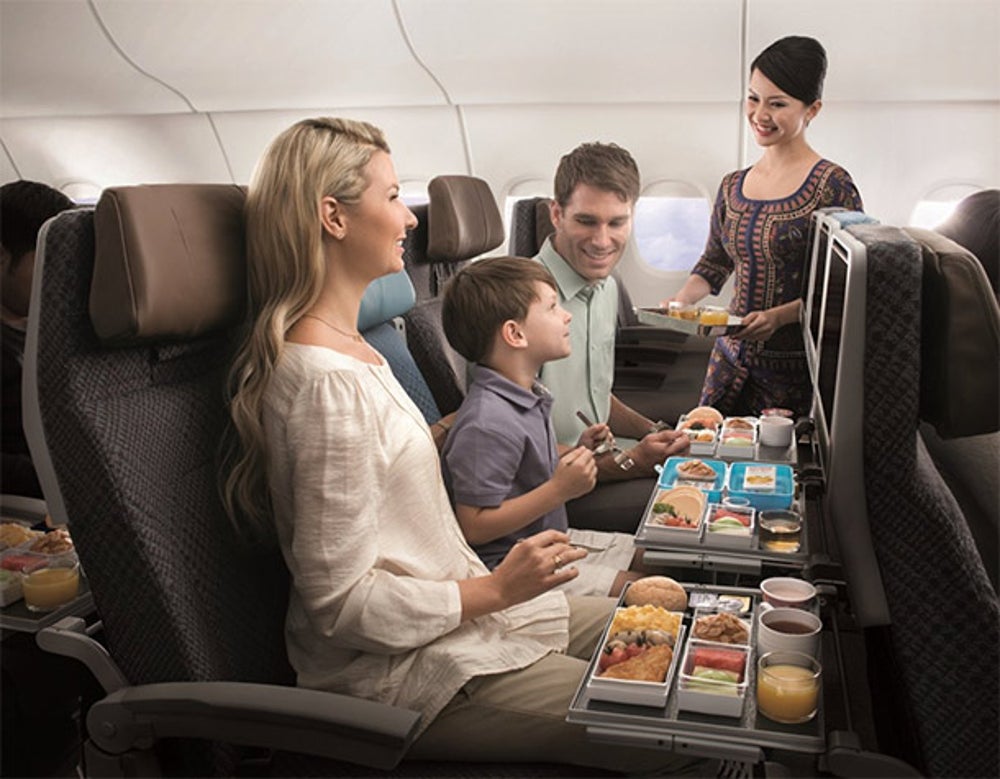 This is the second year that Singapore Airlines topped our list. And that's not surprising considering it won perfect scores in cabin cleanliness and condition, in-flight entertainment, and service efficiency.

Its standout service makes for famously pleasant journeys during which flight attendants are trained to treat customers with extreme care and respect. Personal TVs with plenty of entertainment options and hot towels served before take-off are just some of the economy perks.

3 Airline Stocks That Are Taking Off

Tip Your Flight Attendant? Huh? Frontier Airlines Is Asking You to Do Just That.