Starbucks CEO Howard Schultz was 7 years old and living in the Brooklyn projects with his two siblings when his father, a truck driver, broke his ankle. Without health insurance or worker’s compensation, his family was left without an income or the ability to pay for medical bills.

The family somehow got by but that experience was a defining moment for Schultz. Later, as the CEO of Starbucks, he instituted an unheard of health insurance program that offers health insurance to both full and part-time employees.

A talented athlete, Schultz got into Northern Michigan University on a football scholarship but ultimately decided not to play and got through school with loans and odd jobs. After college, he went into sales, and it was at his second company, Hammarplast, which sold European coffee makers, that lead Schultz to Starbucks.

A compelling communicator, he’d risen within the company quickly. Starbucks, a tiny coffee bean selling operation back -- then owned by Jerry Baldwin, Zev Siegl and Gordon Bowker -- blipped onto his radar when Schultz, the director of sales, noticed an uptick of coffee maker sales to the company out in Seattle. Piqued, he flew out to the city to suss out the situation.

“When I walked in this store for the first time -- I know this sounds really hokey -- I knew I was home," Schultz later remembered.

A year later, he joined the company as Starbucks' director of sales, and during a trip to Italy, he had an epiphany. Up until then, Starbucks had just sold coffee beans. However, struck by Italy’s coffee bar culture, he became convinced that Starbucks should serve coffee drinks and foster community.

In 1984, the original owners of Starbucks gave him the greenlight to open up one coffee bar in Seattle, which became a huge success. However, it soon became evident that Schultz had a very different idea of where to take the company, so he left to open a coffee bar chain of his own: Il Giornale.

Il Giornale also was successful, and Schultz was able to buy Starbucks and merge it with Il Giornale in 1987. Today, no coffee chain sells more coffee drinks to more people in more places.

The 62-year-old CEO -- who was first to graduate from college in his family -- is currently worth approximately $3 billion and heads the Schultz Family Foundation, which focuses on economic mobility for veterans and youth.

Schultz is a true radical and visionary for leadership and business acumen. Here are five lessons we can take away from this leader.

1. Not every decision is an economic one. 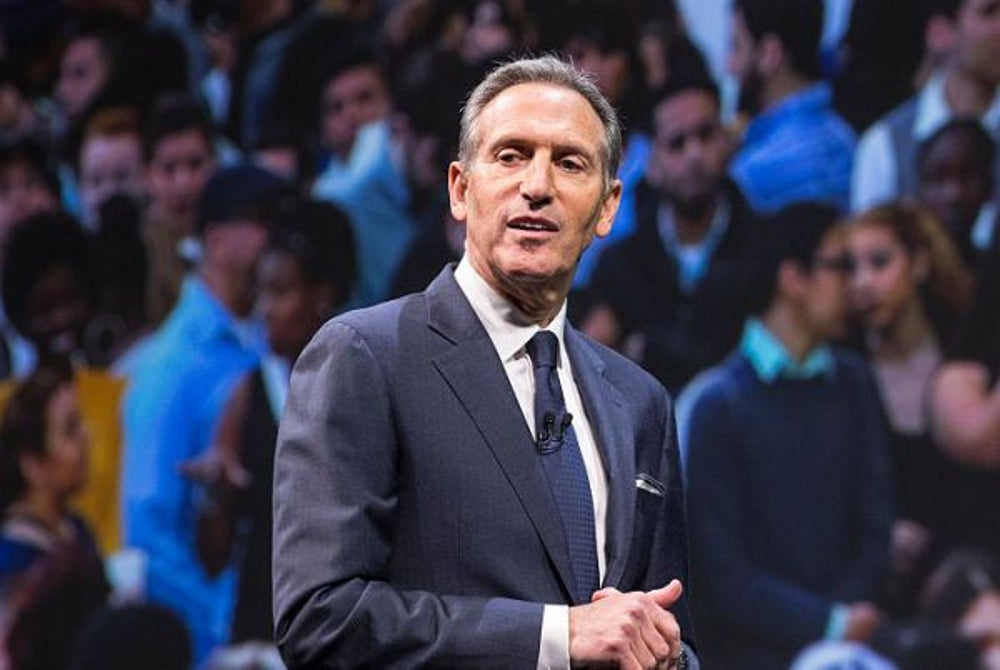 Schultz is a CEO who cares deeply about social change and has been extremely public about his mission  to use the massive reach of Starbucks for social good.

In January 2012, he made his support for gay marriage clear when he publicly joined other big brands, such as Nike and Microsoft, in a backing Washington state bill to legalize same sex marriage.

Several months later, The National Organization for Marriage launched a boycott of the coffee chain leading to a decline in sales in the following quarter. During a March 2013 shareholder meeting, Schultz famously addressed a stockholder’s complaint that the company lost customers due to its support of gay marriage.

Here is an excerpt of what he said in response:

“Not every decision is an economic decision. We did provide a 38 percent shareholder return over the last year [Oct. 2011 - Sept. 2012]. I don't know how many things you invest in, but I would suspect not many things have returned 38 percent over the last 12 months. Having said that, it is not an economic decision to me. The lens in which we are making that decision is through the lens of our people. We employ over 200,000 people in this company, and we want to embrace diversity. Of all kinds."

In the same speech, he invited that shareholder in question to sell his shares and invest in another company. It is clear that Schultz believes that Starbuck’s accountability goes beyond merely financial.

2. Hire people you know who will challenge you. 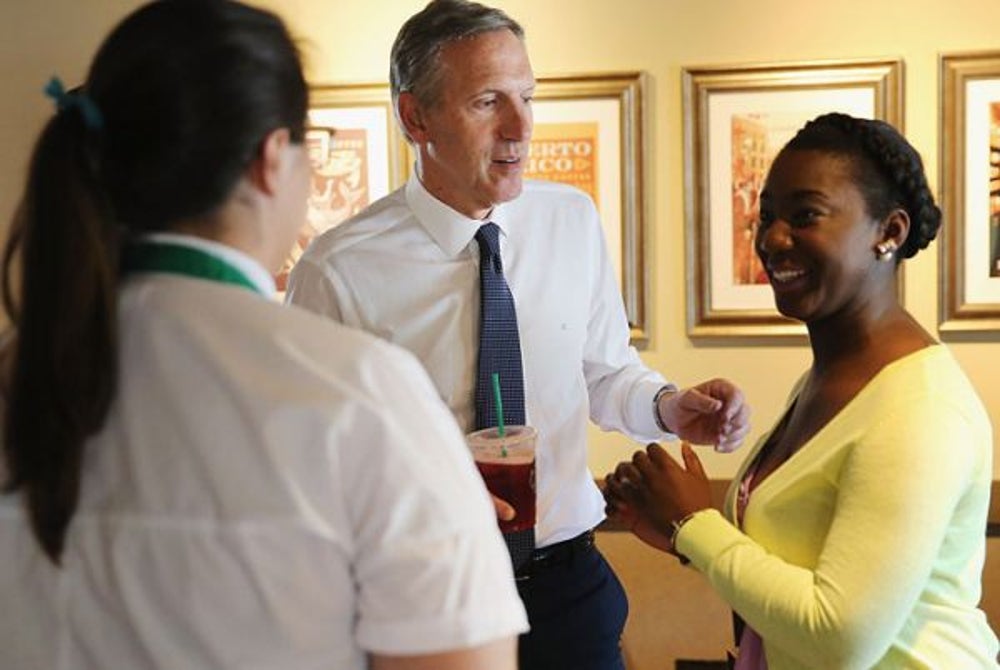 Schultz has a tendency to micromanage -- from weighing in on what sort of beans to add to blends to waking up at 4 a.m. everyday to study the sales reports from the day before, Business Insider reports. And more recently when he attended a staff meeting where black postcards were presented to announce Starbucks’ partnership with Spotify, Schultz instantly demanded change to the cards.

“Black looks so dull,” he yelled. “We’re talking about music. This should be lively. Can we go with green instead?”

His strength is that he is aware of his control-freak tendencies, so he has countered this by shoring up his management team with leaders who can push back, including Kevin Johnson, his chief operating officer who came from Microsoft and Matt Ryan, a chief strategist with a history at Disney.

A story that illustrates Bonini’s point is when, in 2008, Schultz demanded that stores stop selling melted cheese breakfast sandwiches, saying that the strong cheddar scent was overpowering the scent of coffee. 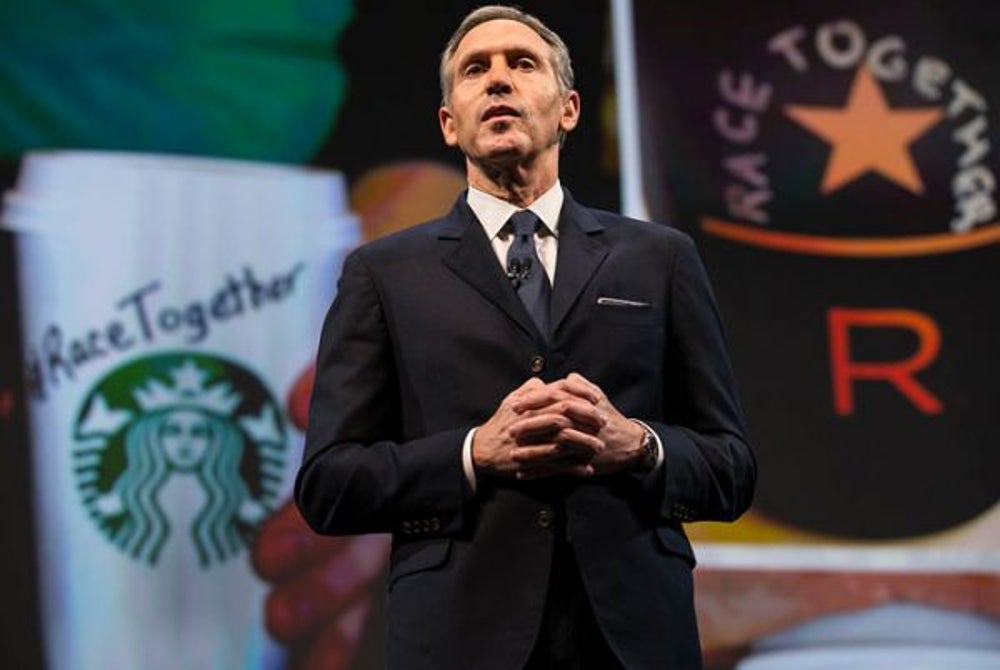 Schultz is well known for his desire to do good, even if some results are bungled.

For instance, his feel-good initiative where baristas in Washington, D.C. wrote “Come Together” on coffee cups to inspire the federal government to work together during the budgetary impasse -- or “fiscal cliff” -- of 2012 fell horribly flat.

But this campaign wasn’t as big a stinker as Schultz’s well-meaninged attempt for Starbucks to engage in the race conversation following racial tensions in Ferguson, Mo. by having baristas write the words “Race Together” on coffee cups in 2014. What ensued was confusion -- from the patrons -- and reluctance and embarrassment -- on the part of the employees. The campaign was pulled a week later.

While his execution of good intention may not always be fruitful, his concern about the country and politics have given rise to some successful and forward-thinking initiatives, some within his own company.

Starbucks rolled out a program to pay for college tuition for its U.S. employees and funds 70 percent of health care costs for both full and part-time employees.

4. Stay connected to your roots. 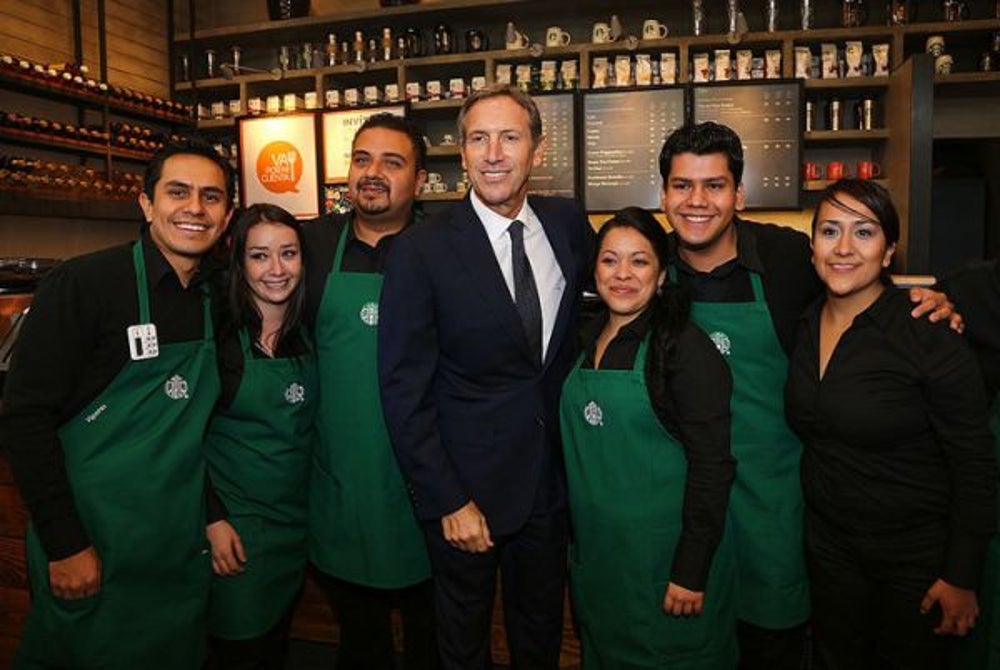 Schultz stays connected to his past, not forgetting his humble beginnings in the Brooklyn projects.

The CEO also keeps on him a touchstone to keep him grounded. He carries with him the key to the original flagship Starbucks store that opened in 1971 in Seattle’s Pike’s Place, where he first saw the brand’s possibilities.

Related: The Key Lesson for Businesses From Starbucks's 'Diabetes Here I Come' Debacle

5. Earn the right to preach. 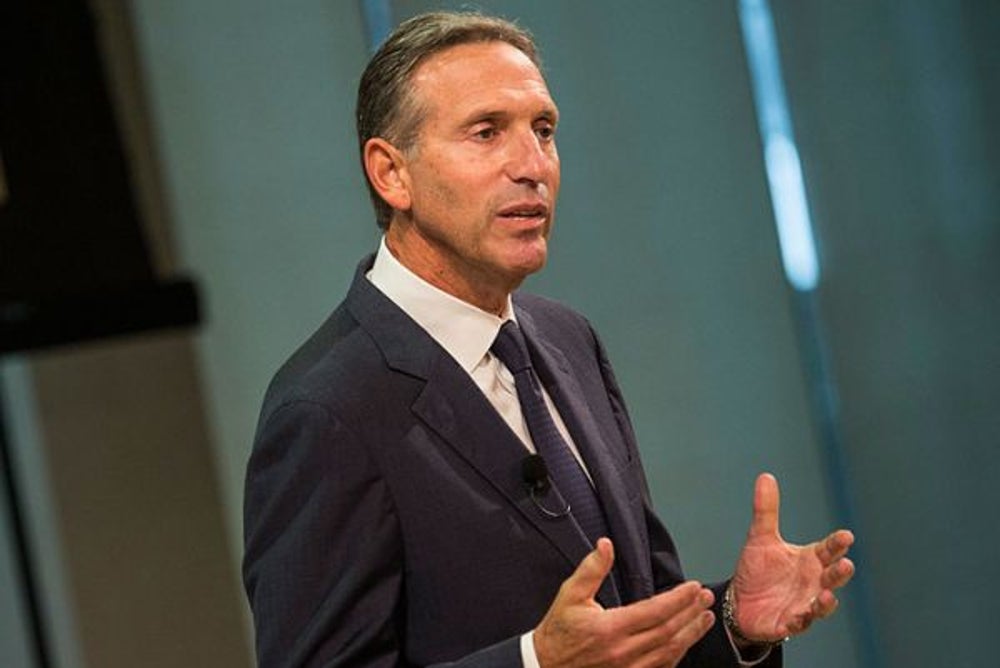 At age 62, Schultz sometimes gets asked by younger business leaders, including John Zimmer, the president of Lyft, and Marvin Ellison, the CEO of J.C. Penney, how to advocate for social causes without risking job security.

His response? “You have to earn the right.”

What he means is that you have to demonstrate that you can deliver the results as a trusted business leader first, with financial growth and profits, before pushing your social goals. Which he has. Although Schultz left as CEO in 2000, he returned to the company in 2008 and has been delivering golden results.

In 2015, stocks surged 48 percent, and according to the latest financial report for the second quarter of 2016, worldwide Starbucks revenue has increased 9 percent -- equal to $5 billion -- and the company has opened 350 additional stores, bringing total store count to 23,921.