Since we spend so much time at the office, they shouldn’t just be for work. What about relaxing, working out, eating, even playing games? These are activities that should be done in offices as well -- or at least some companies think so.

A colorful, engaging and energized office environment can inspire and motivate employees -- especially those with grueling hours such as coders. For companies such as Google, Autodesk and Groupon, having a stellar office design gives them a competitive edge when recruiting top talent.

Today, more and more offices are focusing on perks and office aesthetics to inspire and encourage employees. Basketball courts and videos games are only a few of the ways companies cater to employee needs and wants.

Check out these 8 awesome spaces that will give you office envy. 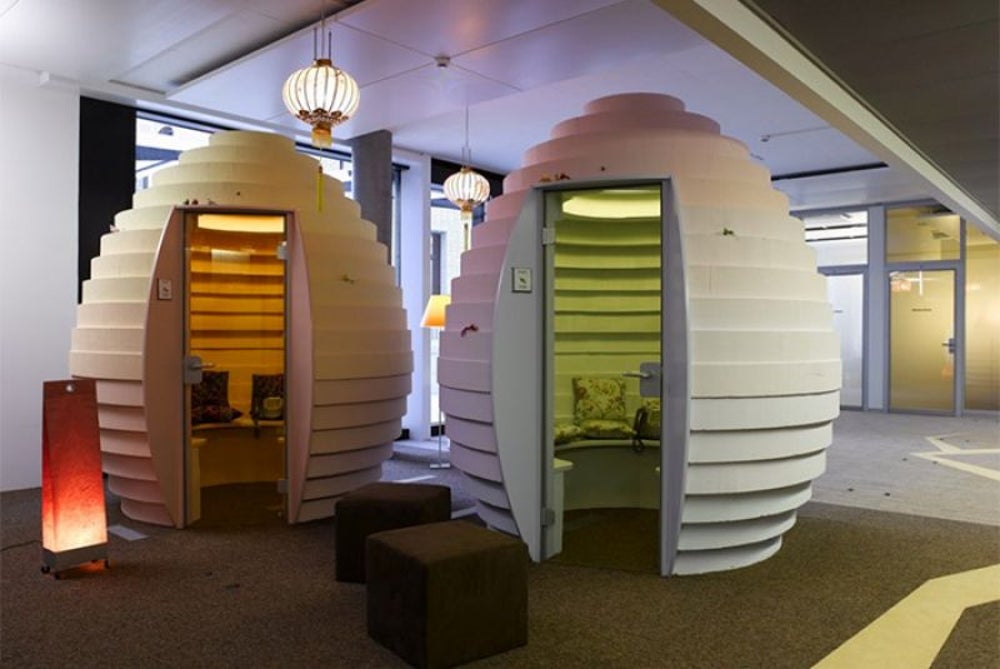 Need a break from all the hustle and bustle? Google’s Zurich campus boasts unique pods for employees to get some peace and quiet.

With egg-shaped pods and gondolas converted into meeting rooms, the office is an architectural masterpiece that inspires and motivates. It’s no wonder Google tops lists as one of the most innovative companies.

Camp out in Autodesk. 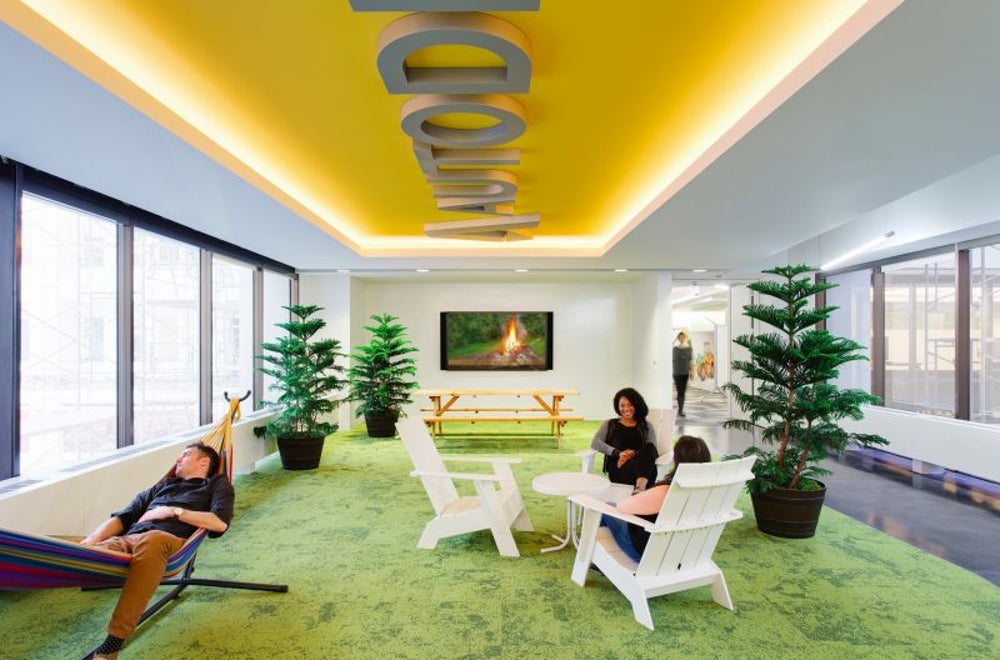 California-based Autodesk takes the pressure off employees by providing them with some “nature” to clear their heads.

Clad with a hammock, some shrubbery and a “campfire,” you may fool yourself into thinking you’re in Yosemite.

Shoot some hoops at Adobe Systems. 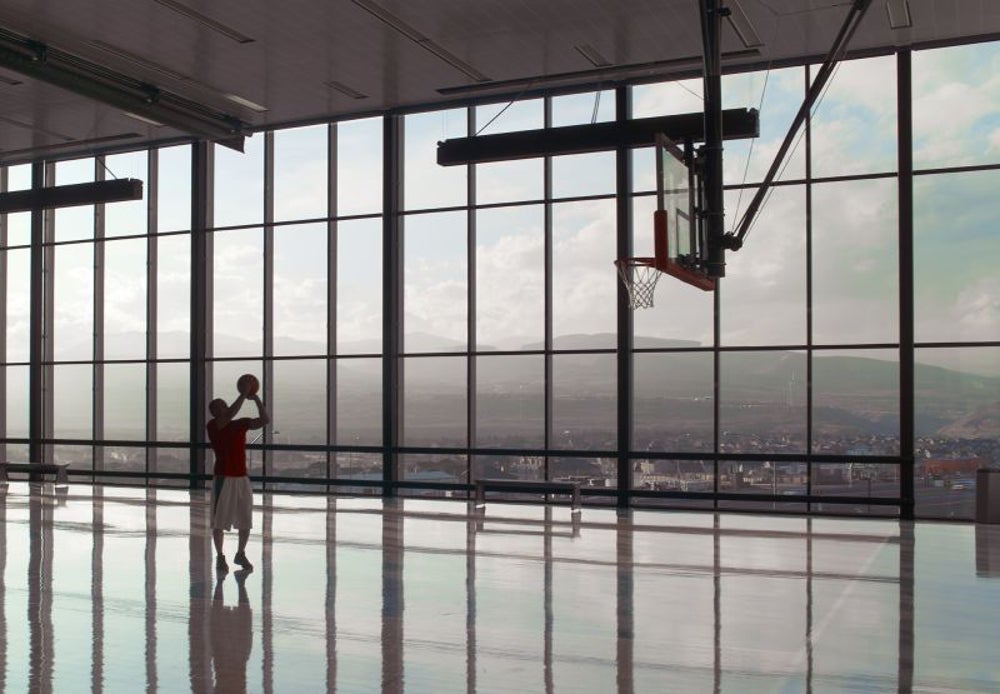 Act like a child at Groupon’s headquarters (OK, this one’s a little weird). 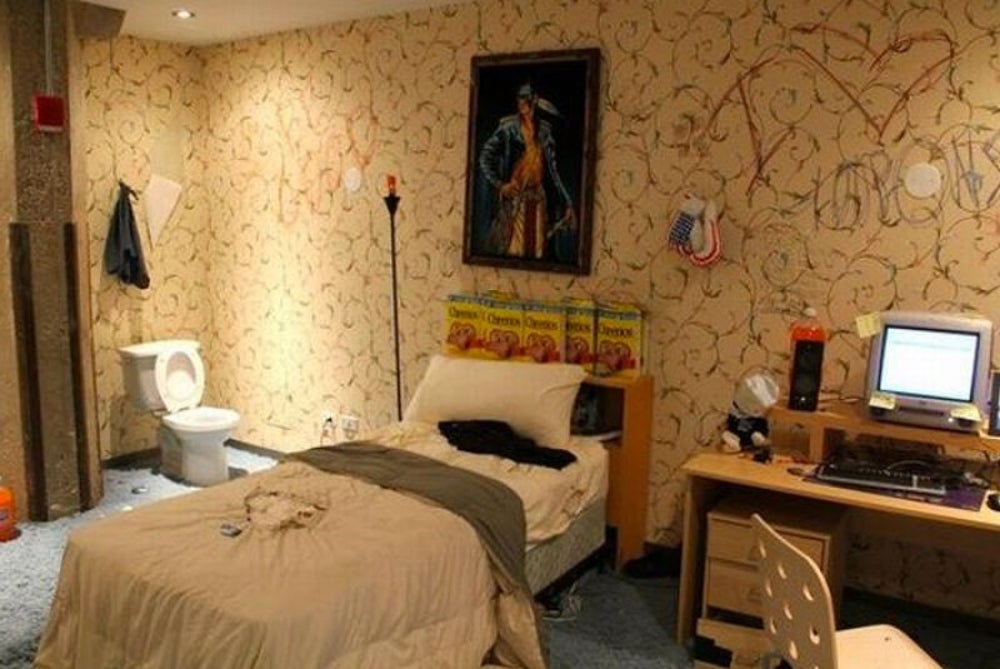 As the story goes, a boy named “Michael” used to live at Groupon’s Chicago headquarters before the company moved in. Rumor has it the folks at Groupon were kind enough to let him stay there.

The wallpaper clad room is a teenage boy’s dream, with Cheerio boxes, a bicycle that plays Sade’s “Smooth Operator” when you pedal, a toilet full of Almond Joy candies and an old iMac filled with Van Halen music.

Although its history is likely a hoax, Groupon comedy writers are said to use the room for inspiration or to “blow off a little steam,” Business Insider reports.

Work in your very own … storage unit. 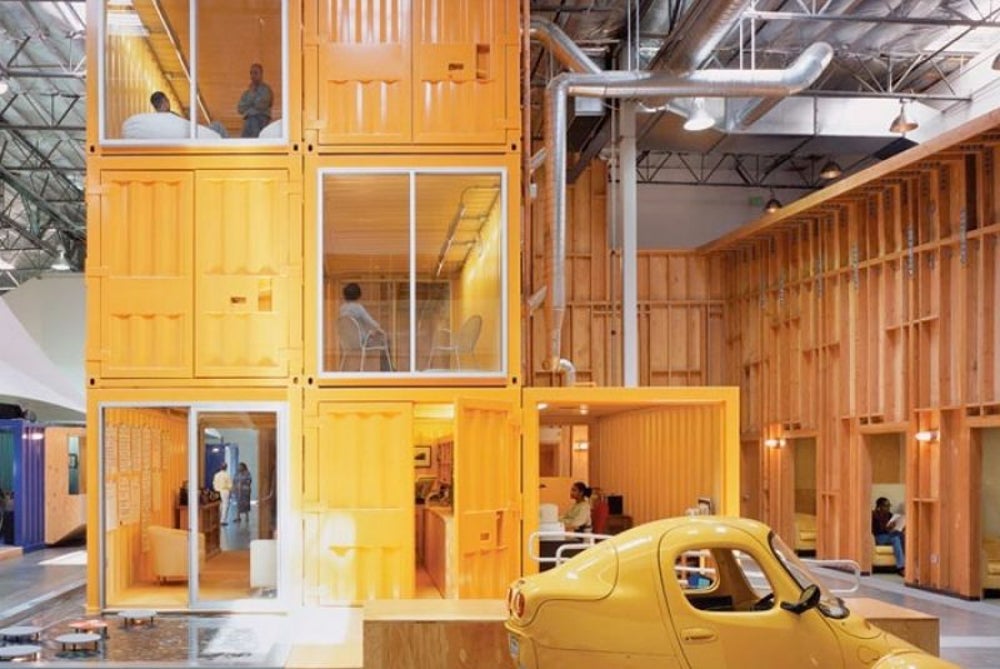 Pallotta Teamwork, a charity event company, was resourceful in its office design. Fearing major expenses furnishing and maintaining the massive warehouse the company moved into, Pallotta got crafty and came up with methods to cut costs and create a fun and modern office space.

Utilizing shipping containers as private offices, the company turned the drab warehouse into a colorful and creative environment.

Play video games in the dark. 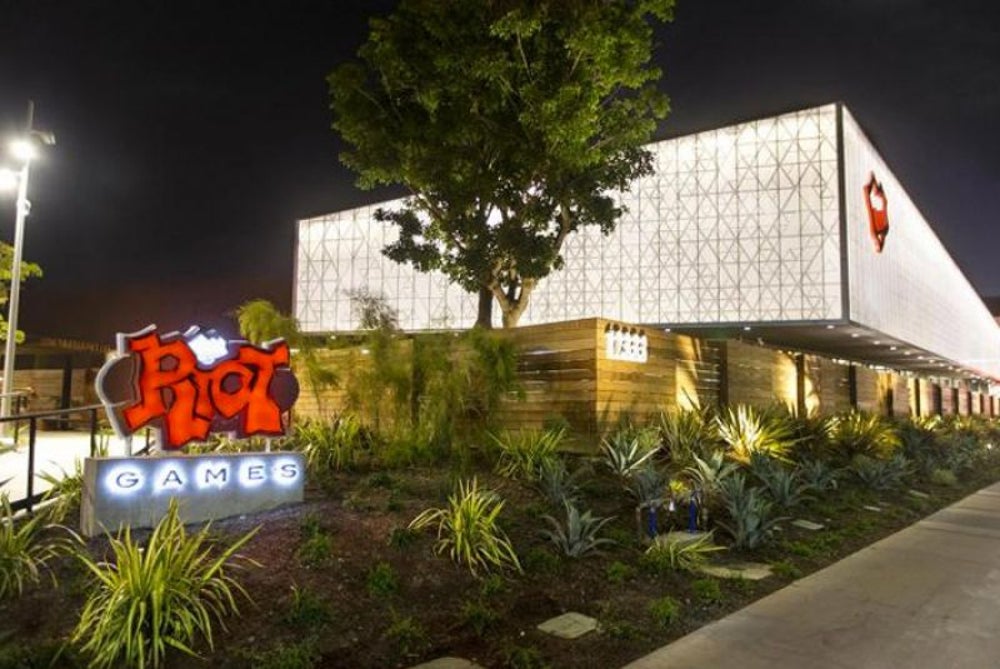 It’s an HR policy at Riot Games to only hire employees who enjoy playing games.

Because of this, the company behind the massive hit League of Legends created an office that supports workers who are playing games all day long with neon lighting and an arcade-like environment.

It doesn’t end there though -- the entire office caters to the likes of these gamers and brings to life its product. Upon entering the Los Angeles office, you’re greeted with League of Legends characters Annie and Tibbers.

Be in-the-know at Seamless. 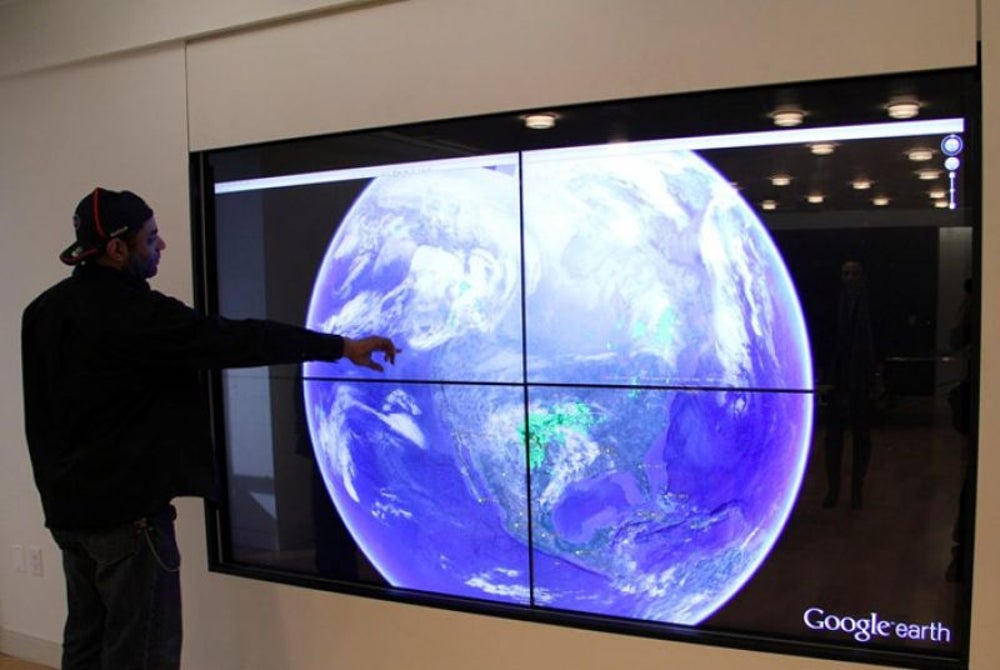 Curious how hot it is in Dubai? Maybe you just want to know what the weather outside the office is. At Seamless headquarters, “The Weather Wall” can help.

With four massive, high-res, touch screen TVs adorning the wall, employees can check the weather, search the web and get updates on Seamless analytics.

Although those actions don’t sound very “high-tech,” the beauty of this wall will make your jaw drop. 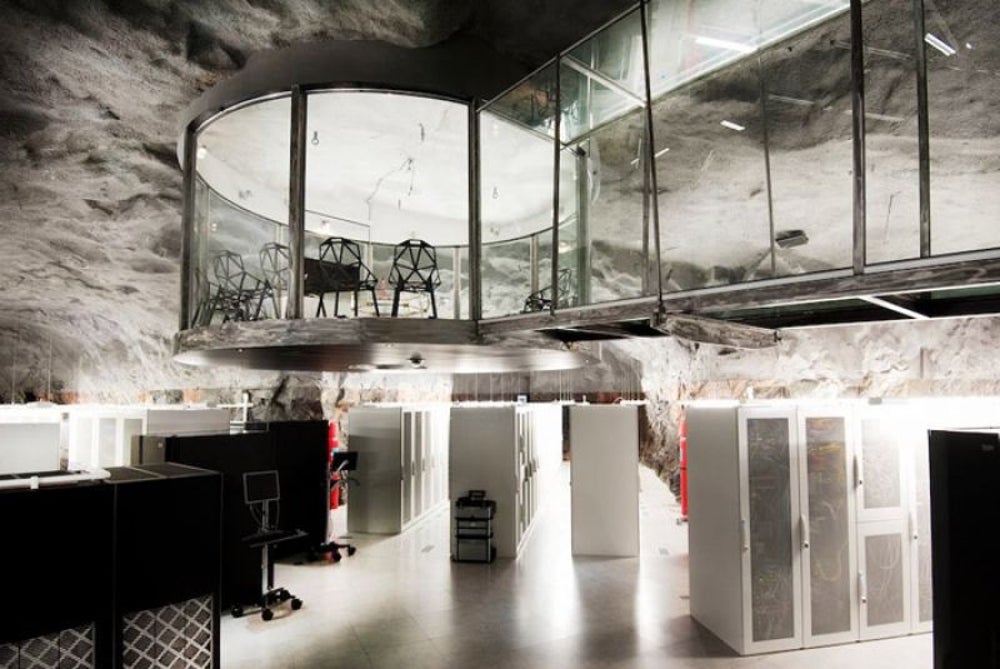 Once used as an atomic bomb shelter, Swedish internet provider Bahnhof AB’s office in Stockholm is 100 feet below the surface.

The data center located inside a Cold War-era nuclear bunker is one of the most advanced office designs seen yet. With caves, shrubbery and angular, glass offices, the advanced office space is both rooted in the past and ahead of its time.

11 Ways Successful People Deal With People They Don't Like

5 Keys to Establishing Meaningful and Fruitful Connections in the Workplace