In the Company of Women: 3 Female Founders to Inspire You to Success

Here are three of the 100 different women profiled in Grace Bonney's newest book.
Next Article

Entrepreneur Reads is a series designed to bring to our readers the best books we've found to help motivate your entrepreneurial drive. Follow us on Facebook and Twitter to be notified of new features.

In Grace Bonney's second book, In the Company of Women: Inspiration and Advice from over 100 Makers, Artists, and Entrepreneurs, there is a vast collection of insightful interviews from women leaders across a diverse range of industries and backgrounds. The author, who's also the founder of the popular blog Design*Sponge, notes that the book's goal is to help empower and inspire the next generation of entrepreneurs and makers, and offer "insights into what success really means, overcoming obstacles, staying true to yourself, and so much more."

If you haven't already, read up on our interview with Bonney here on her entrepreneurial journey and to discover the motivation behind her new book.

The following selection of features is excerpted from the book with permission from Grace Bonney and Artisan Books. 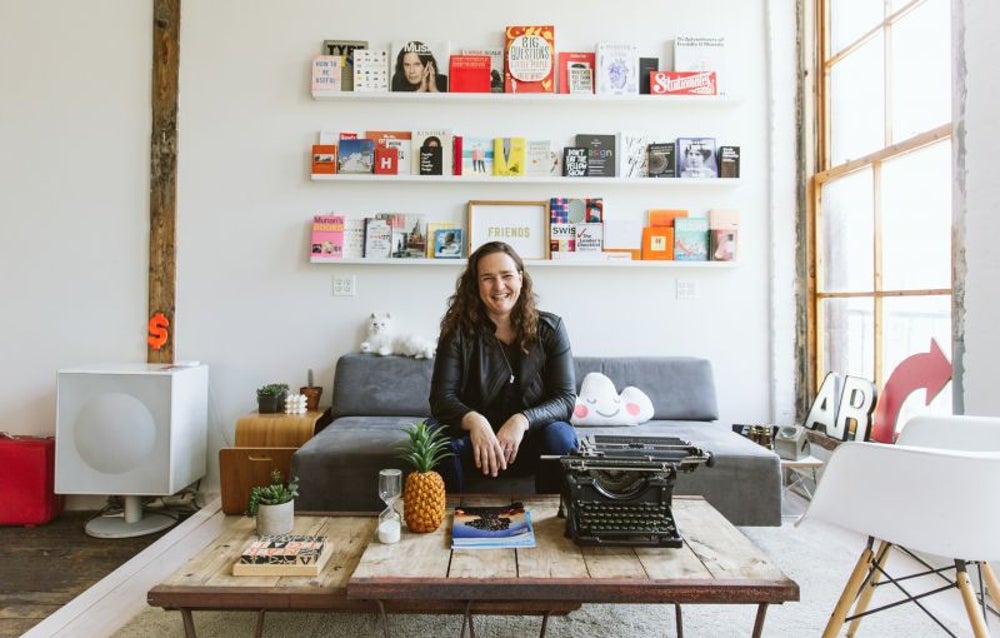 What did you want to be when you were a child?
Eisenberg: For a while I thought I would take over my mother’s high-end clothing store, which my grandfather founded. I am glad I didn’t. Knowing what I know now, I am certain that the fashion industry wouldn’t have been a good fit (pun intended).

At what point in your life did you first learn about your field of work? What called you to it?
Eisenberg: When I was about seven, on vacation in the South of France, I watched my uncle draw type. I asked him “What are you doing?” And he said, “I am working!” I was confused, as in my understanding, he was just doodling, drawing, having fun. So I followed up, saying, “Working, as in making money?” And he just said, “Yep!” I was a kid who was never not drawing. It was if a lightbulb went off in my head. “I can make money off drawing type? Drawing can be my profession?” This makes me understand how important it is to expose my kids to as many different “worlds” as possible.

Name your greatest success (or something you’re most proud of) in your business experiences.
Eisenberg: I am probably most proud of the fact that the simple idea of CreativeMornings, hosting an accessible, free event for my creative community, has resonated with so many people around the world that we are now a global organization of over a thousand volunteers putting on events monthly. For free. And we are growing by three to five chapters a month. What started in my studio has become a global labor of love. CreativeMornings has shown me that when you put trust in people, they will over deliver and surprise you. Trust is the biggest compliment of all. Trust breeds magic.

What was the best piece of business advice you were given when you were starting out?
Eisenberg: Nobody knows better what you’re capable of than yourself. Trust yourself. Trust your ideas. I have a lot of young people asking me for advice, presenting me their ideas for business, thinking I know the ultimate answer to their questions. I always tell them, if you believe, deep inside, that you can make this work, make it something people care about, then go for it. You know best.

What is your favorite thing about your workspace?
Eisenberg: I have a few: our swing, confetti drawer, and prop box, which holds lots of silly things such as hats and boas. Sometimes you just need to wear a Viking hat to respond to a difficult e-mail. I believe that you do your best work when you’re having fun. 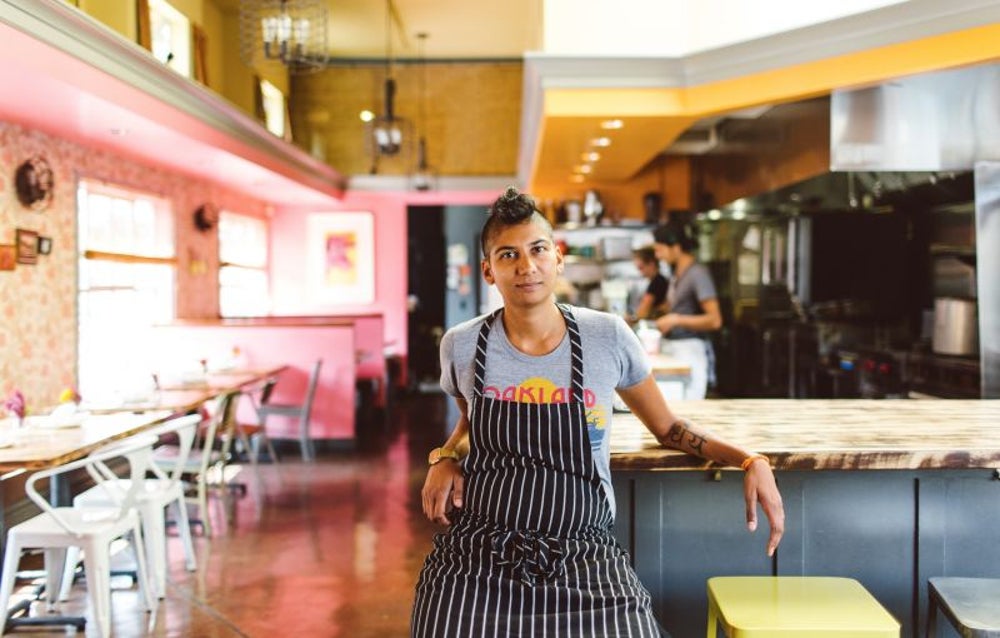 Where were you when you came up with the idea for your business or discovered what you wanted to do?
Mistry: I was on a road trip from San Francisco to Palm Springs with my wife. I had quit my executive chef job at Google, and we decided to get out of town and take a vacation. I had been thinking of focusing on Indian cuisine and had been experimenting at home for a while. We were wine tasting around Paso Robles and the name hit me — Juhu Beach Club — and then the rest started to fall into place in terms of menu, branding, etc.

Name a woman (or women), past or present, whom you admire or look up to.
Mistry: Chef Raji Jallepalli. She was an Indian chef who died when she was only fifty-two years old. She was the first chef combining Indian and European flavors and techniques back in the 1990s. I had her book when I was just starting out in cooking professionally fifteen years ago, and it was a huge inspiration to me.

What is your favorite thing about your workspace?
Mistry: Well, a restaurant kitchen more often than not can be a pretty hostile place. Our kitchen believes in nice. We help one another, we care about one another, we joke around in a way that is not disrespectful to anyone else. It’s a happy place. Also, being my own boss is key to my happiness.

Which of your traits are you most proud of?
Mistry: I am myself. I refuse to fit into what people want me to be or expect me to be. I stand up for what I believe in and will fight for it.

What does success mean to you?
Mistry: This is a question I have been asking myself a lot lately. I used to think it was just financial freedom of some kind, but honestly, that is just what I was raised to believe. If that was all I wanted, I would have become an investment banker. Many people try to convince me that I am successful, but that makes no sense to me. I have so much more to do; there is so much more I want to contribute to the world. I can’t put my finger on what “success” truly looks like for me, but I’ll let you know when I figure it out. 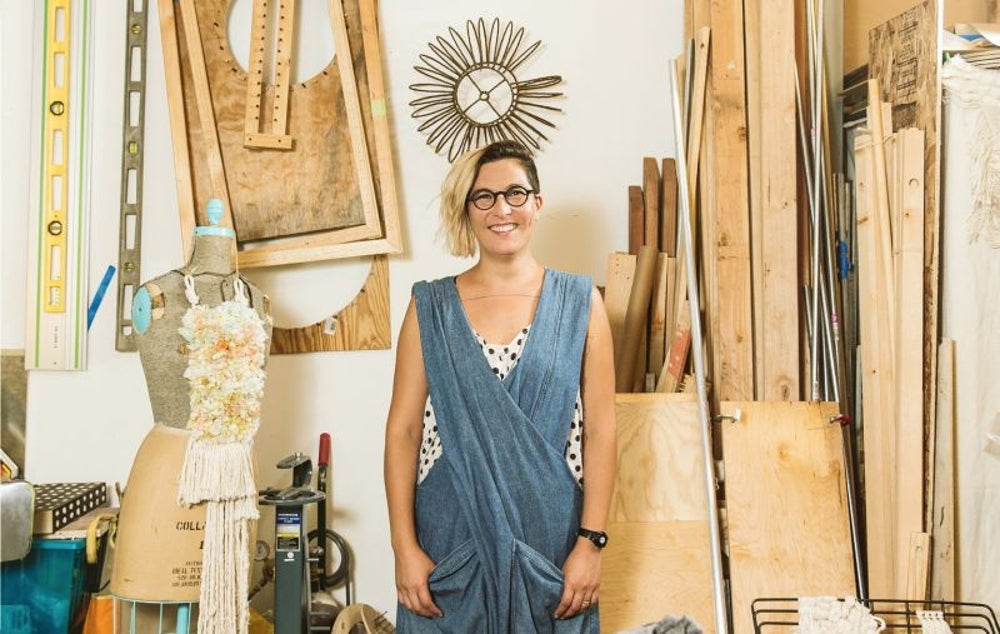 At what point in your life did you first learn about your field of work? What called you to it?
Aguiñiga: Having grown up in an environment in Mexico where everything was put to use, I was drawn to artistic expression that was fully functional. My first solo apartment was above a midcentury furniture store, and I became interested in furniture from staring through the shop windows at night. I walked into the shop one day and asked the owner if I could volunteer at the store. He said you could not volunteer at stores, but that a young lady named Wendy taught furniture design at San Diego State University and I should go study with her. This led to my studying furniture design at SDSU with Wendy Maruyama for my bachelor’s, and at the Rhode Island School of Design (RISD) with Rosanne Somerson for my MFA. While studying woodworking as an undergraduate, I was introduced to jewelry making/metalsmithing, ceramics, and textiles.

Name a woman (or women), living or dead, whom you admire or look up to.
Aguiñiga: I was really lucky to have studied under two amazing women, Wendy Maruyama and Rosanne Somerson, who are leaders in the field of furniture design. Wendy was one of the first two women to receive a master’s in furniture design. (Gail Fredell was the other.) Wendy is Japanese American and hearing-impaired and, despite adversity, persisted to become a seminal figure in American furniture design. I also had the great privilege of having Rosanne Somerson as my department head, professor, mentor, and friend. I went to RISD specifically to study under Rosanne, who had become one of my role models in design. When I was a student, Rosanne believed in me more than I believed in myself. Having had two strong women at the helm of my career made me feel like the field was ours for the taking.

Name the biggest overall lesson you’ve learned in running a business.
Aguiñiga: You have to be resourceful, work hard, be kind, and constantly innovate. You never know who a stranger actually is and what they may mean to your business later on, so you have to treat everyone you come across with respect and never burn bridges. You also need to be true to yourself when designing and editing and explore your own story as a source of inspiration, as that is what will give your work more integrity and make you stand out from the crowd.

What was the best piece of business advice you were given when you were starting out?
Aguiñiga: I’ve always followed the advice to work smarter, not harder. I believe in assessing a situation early in the process to make sure that it will yield success, since time means money. I try not to beat something into the ground, and let go if it’s not promising.

What is your favorite thing about your workspace?
Aguiñiga: My workspace is part of an arts complex in my neighborhood. Because we are a part of one another’s community in and out of work, my studio neighbors are generally open to collaboration, friendship, and helping one another’s businesses thrive. I receive a significant amount of business from my studio neighbors each year and I contract them on jobs whenever possible.

On Monday, Oct. 17 Tanya Aguiñiga will appear on an incredible panel with Grace Bonney and other amazing business owners for the #InTheCompanyOfWomen Los Angeles event. Visit link here for ticket information.

Be sure to grab your copy of In the Company of Women today on Amazon, Barnes & Noble or eBooks.com.

How to Listen to Eddie Huang's Latest Audiobook – For Free

Michael Glauser's 10 Books That Will Kick Start Your Entrepreneurial Dreams