9 of the Weirdest Places for Restaurants in the World

Would you feel comfortable eating lunch in prison? How do you feel about seafood under the sea or dinner in a tree? These nine restaurants from around the world have taken dining to places you'd never expect -- literally. Check out the full slideshow to see some of the strangest, coolest and most dangerous places to eat in the world. 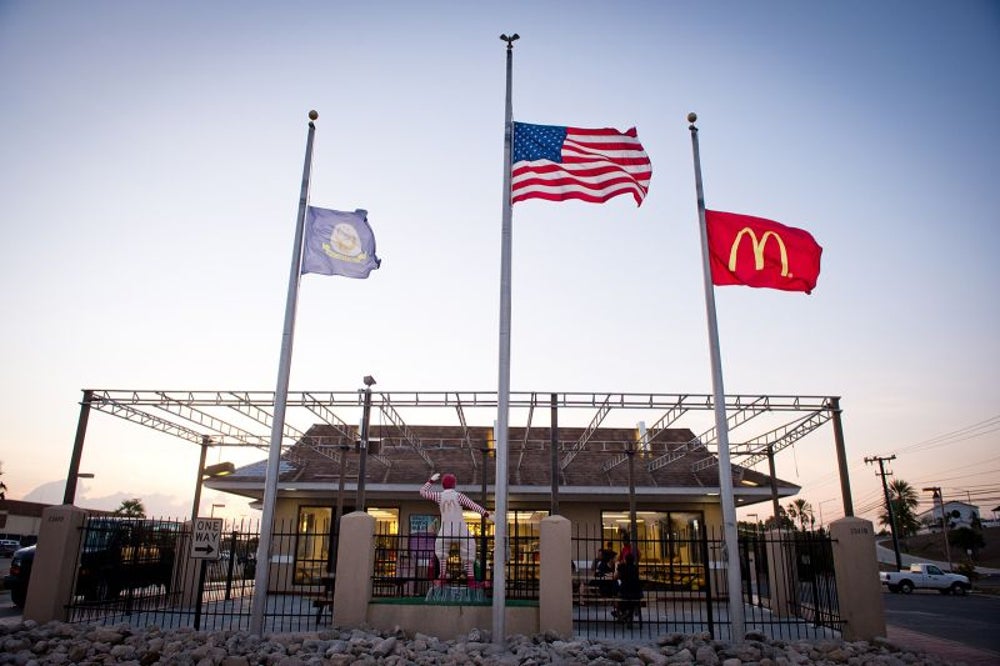 Image credit: MLADEN ANTONOV | AFP | Getty Images
The only McDonald's on the island of Cuba is located within the compound at Guantanamo Bay naval base. It is only accessible to personnel on the base -- though, according to ABC News, it is possible "that U.S. interrogators bought food from the same McDonald's to bribe and coerce detainees."

Pizza Hut/KFC Combo at the Pyramids 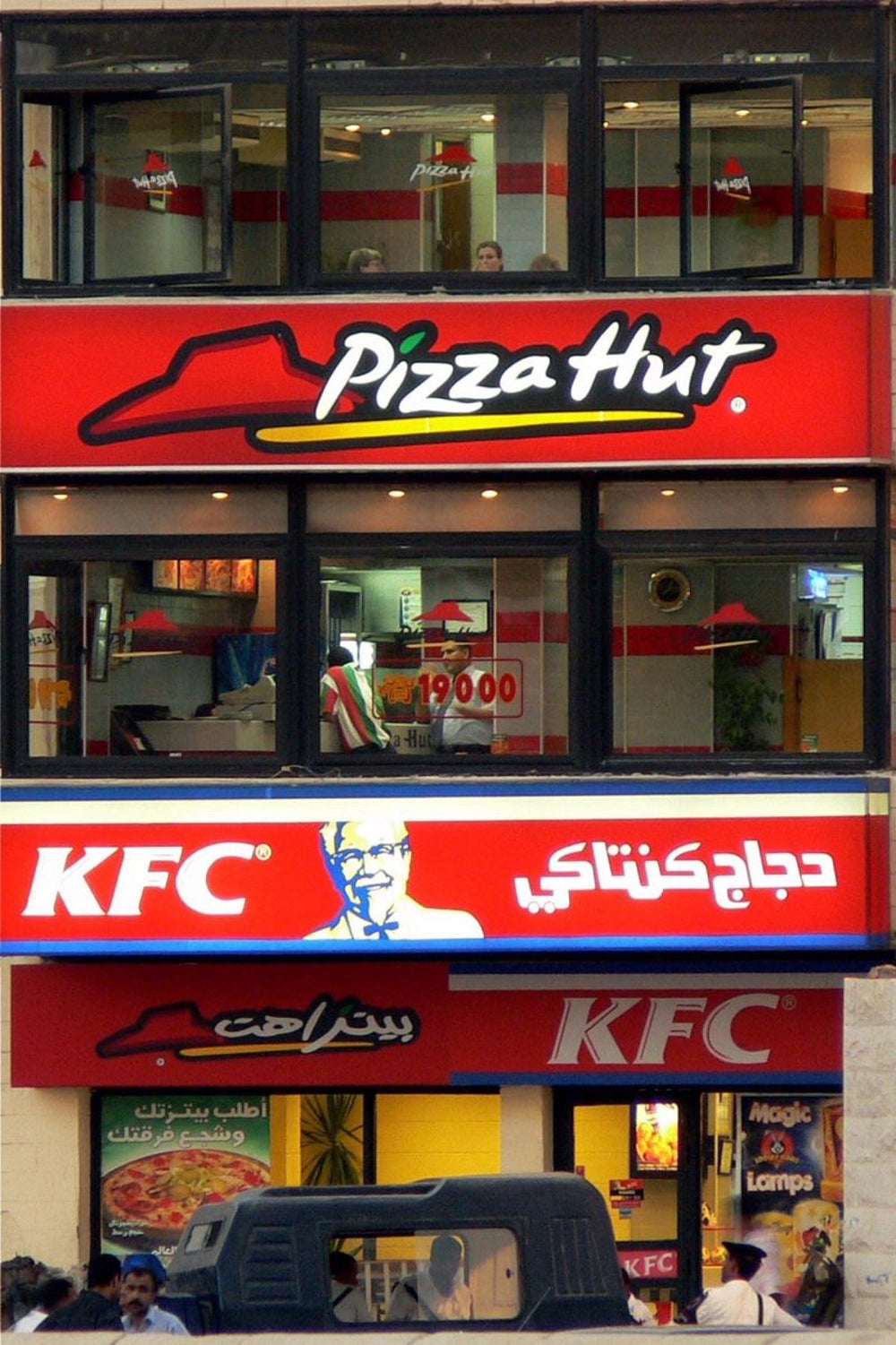 Image credit: JOKER | Hady Khandani | ullstein bild | Getty Images
Experts guess that the Great Pyramid of Giza was completed around 2560 B.C. The Sphinx was finished around 2532 B.C. Kentucky Fried Chicken and Pizza Hut were founded in the 20th century. Now, though, you can find the fast food joints just a few hundred yards away from some of the most iconic structures in the history of man. 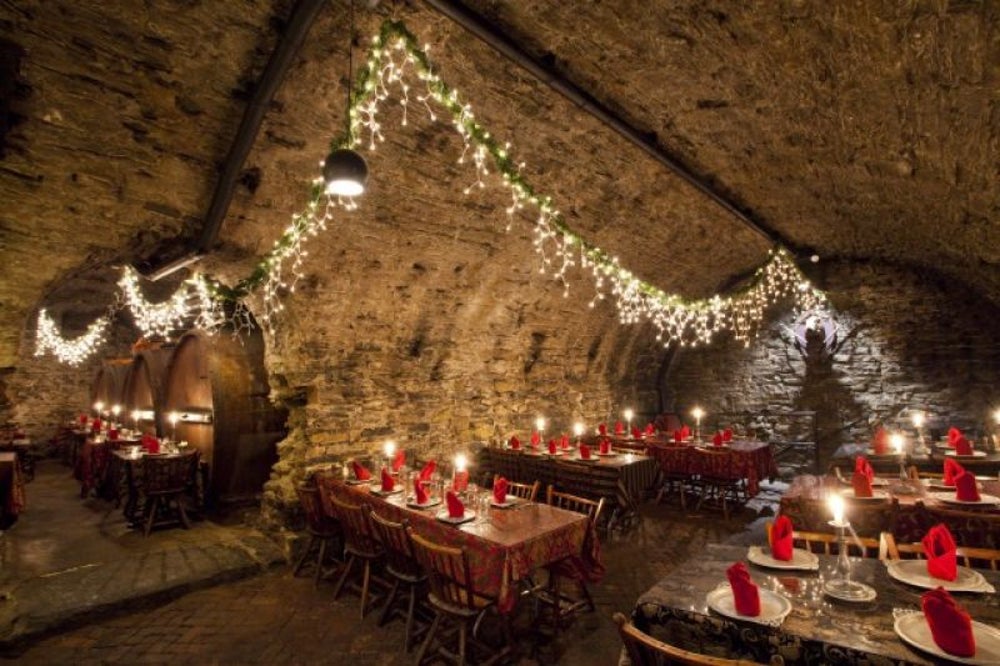 The Catacombs Restaurant might be a mainstay of Lancaster, Penn. dining, but you'd have a tough time finding it on Google Maps. Carved into the earth beneath a brewery, the Catacombs offers tours as well as dinner and, unsurprising given its proximity to Bube's Brewery, drinks.

Related: How to Start a Restaurant

The Yurt at Solitude 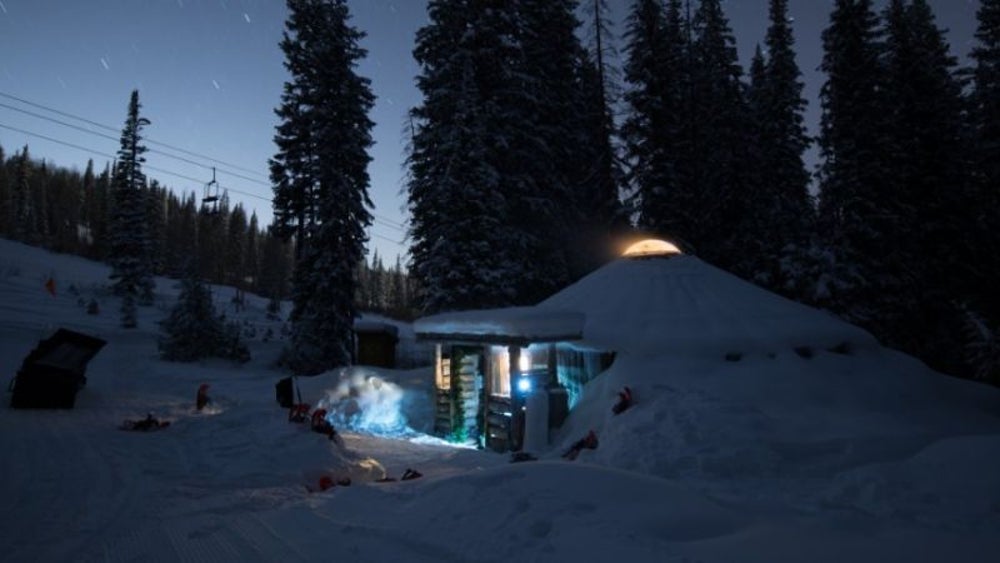 Talk about exclusive. If the fact that the Yurt at Solitude (located in Solitude, Utah) only fits 24 guests at a time, only stays open for four hours a day, four days a week, doesn't allow anyone under 13 to dine there and costs $130 per person isn't enough, consider this: You have to walk a half-mile in the snow just to get there. The good news? At least the Yurt provides snowshoes. 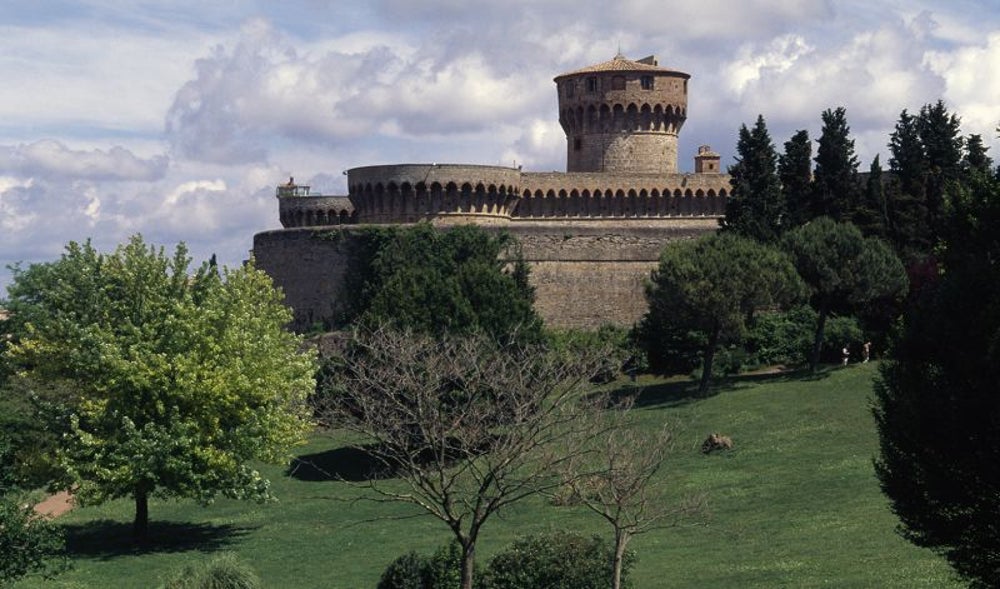 At the 500-year-old Medici Fortress just outside Volterra, Italy, prisoners help chefs prepare special meals, which are open to the public about once per month. Just be aware while you're working through your meal, though, that this place is no joke or gimmick. It really is a maximum security prison. 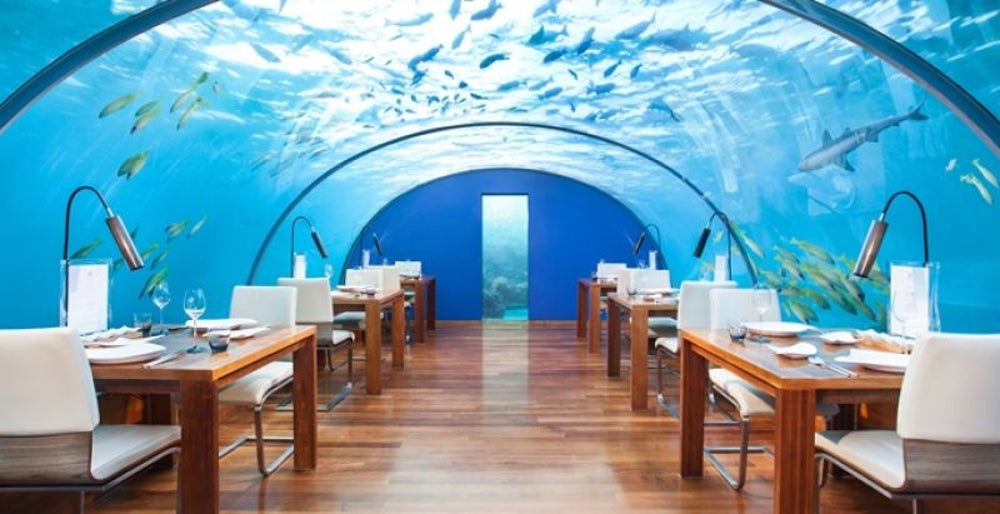 Ithaa at Rangali Island Resort, opened in 2005 and located at the Conrad Maldives, is an all-glass restaurant that lies 16 feet below sea level. The restaurant offers up to 14 diners a 270-degree view of the water as sea creatures swim around you . . . and since seafood is the main course on the menu, you just might see your dinner out there.

Dinner in the Sky 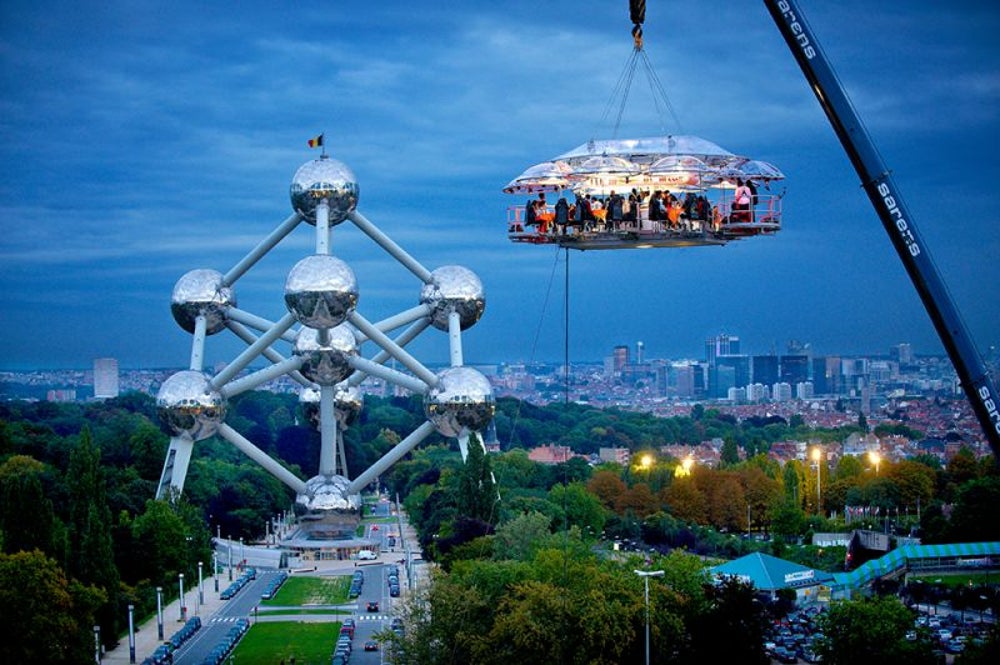 Image credit: Dinner in the Sky

If you're not a fan of heights, this one isn't for you. Dinner in the Sky, which originated in Belgium, uses a crane to lift whole dining sections (complete with wait staff, chef, and table) 160 feet into the air, where you can enjoy your meal. Just make sure you use the restroom beforehand, because there's no going back down between courses. 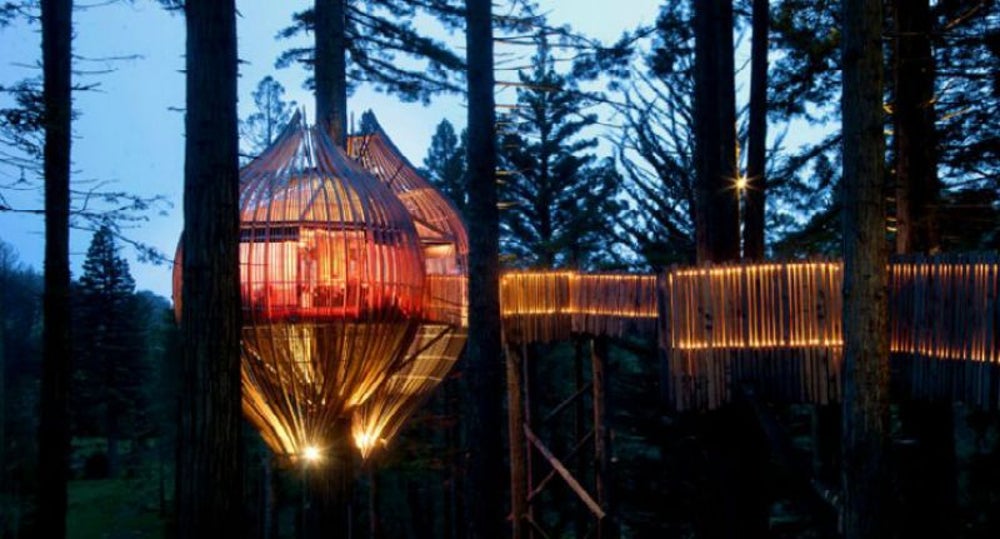 Image credit: Redwoods Treehouse
The Redwoods Treehouse in Warkworth, New Zealand, isn't technically a restaurant -- it's a venue where weddings, parties and corporate events take place. But, the Treehouse does offer catering for the venue (which costs $3000 to book before considering food and drinks), which makes it close enough -- and strange enough -- for this list. 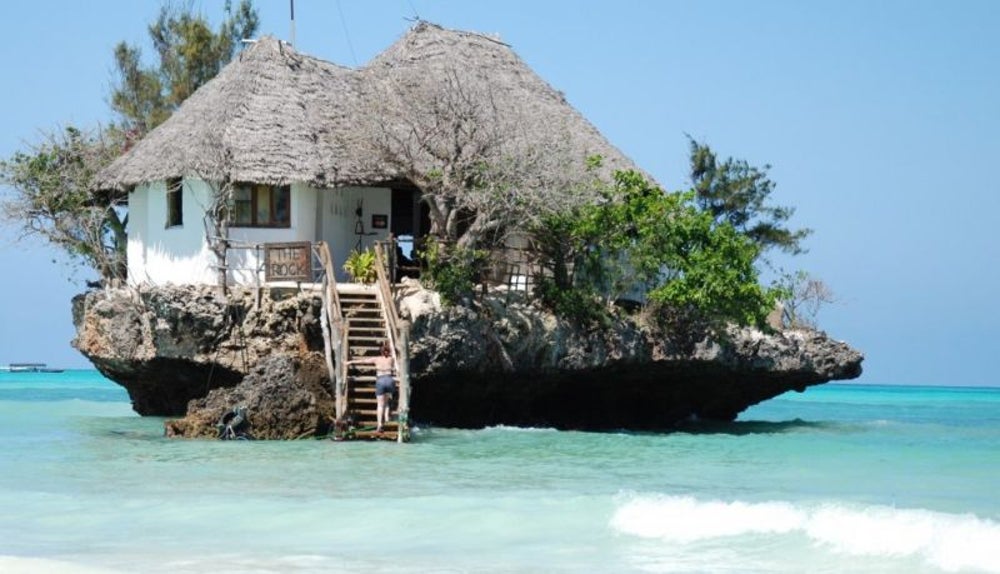 The Rock, located off the southeast coast of Zanzibar, is aptly named. Built on top of a massive rock in the Indian Ocean (which was originally used as a fisherman's post), the restaurant opened in 2010 and is accessible by foot . . . at least, during low tide. Otherwise, the restaurant offers a boat to shuttle you across the water.