From dog owners to police officers to speed demons to 'intrepid urbanites,' this year's show has something for everyone.
Next Article

While self-driving car technology is gaining steam and major automakers continue to dub themselves “mobility” companies, Americans bought more cars and trucks in 2016 than in any year since the advent of the automobile. Carmakers have low gas prices, rising employment and low interest rates to thank for that record high, though it may be difficult to match this year, experts warn.

At this year’s New York International Auto Show, which runs April 14 through 23, SUVs of all sizes are on prime display. Many of them are tailored to fit consumers’ active, experience-oriented lifestyles, rather than touting luxury for the sake of materialism. Hyper-specific concept cars cater to everyone from dog owners to triathletes, and options for personalization transcend tastes and tap into values.

Related: 5 Surprising Things to Come Out of the Detroit Auto Show

Check out these 16 approaches to automotive innovation and see where the industry is driving toward next. 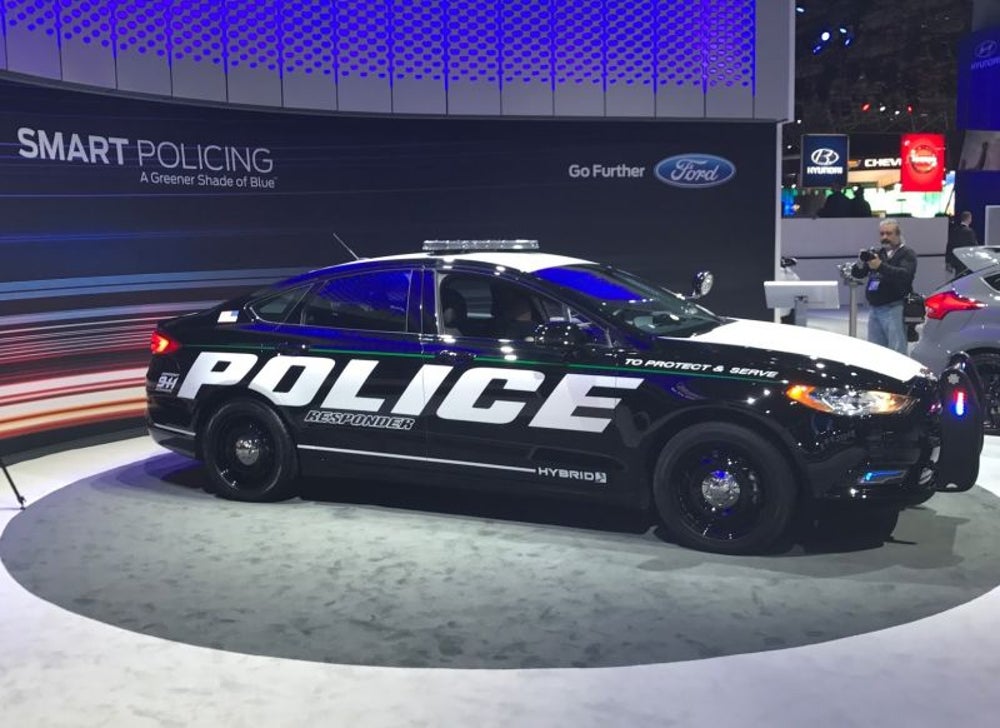 Image credit: Lydia Belanger
Ford’s Police Responder Hybrid Sedan is the company’s first hybrid vehicle designed for law enforcement. Potential benefits include fuel savings and reduced CO2 emissions (especially because police cars spend so much time sitting idle), as well as fewer fill-ups. Its interior contains standard equipment that police use demands, such as anti-stab plates on the back of the front seat and easy-to-clean vinyl on the rear seat and floor. 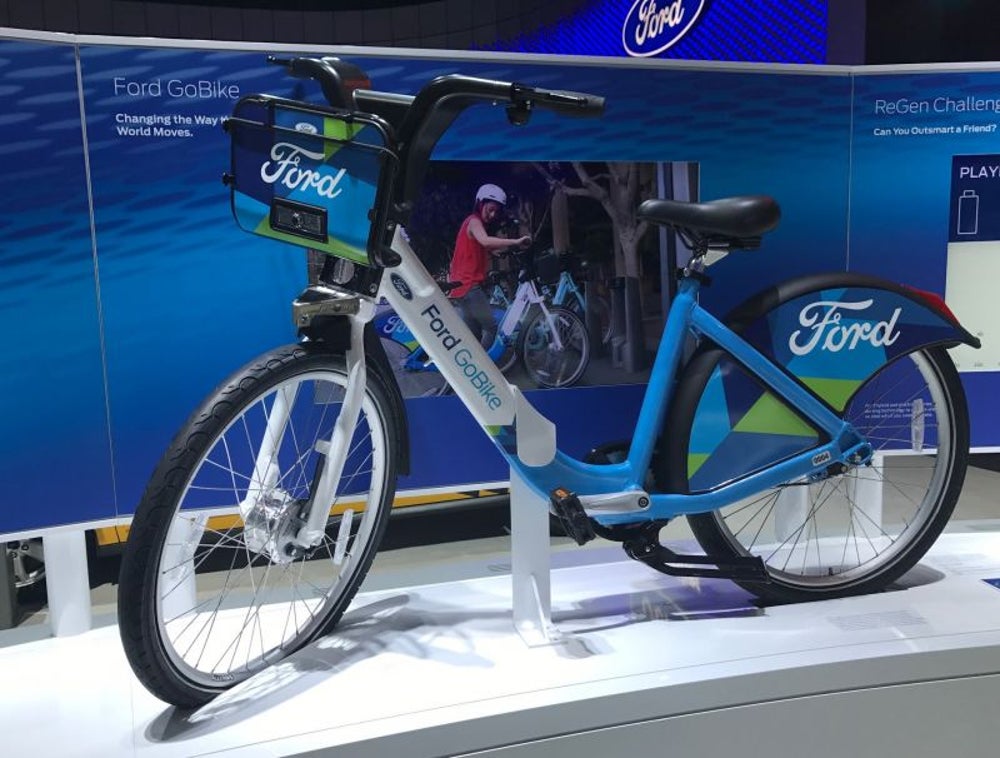 Image credit: Lydia Belanger
Ford Motor Company’s subsidiary Ford Smart Mobility is developing several solutions for cities around the world, and its GoBike bike sharing program is one of them. The company aims to alleviate congestion in cities and help commuters travel “the last mile” to or from public transit. 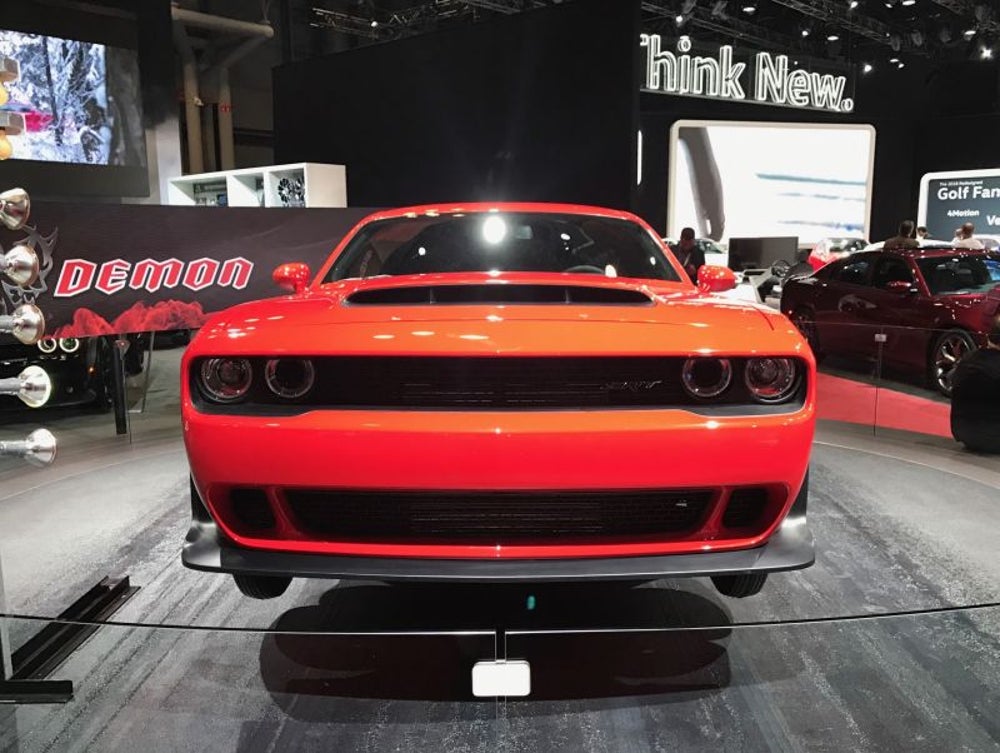 Fiat Chrysler’s Dodge brand claims that its Demon Challenger is the fastest production car out there, accelerating from zero to 60 in 2.3 seconds and leaving the Tesla Model S P1000D, which takes 2.5, in the dust. It also claims to have the highest horsepower, highest G-Force and fastest quarter-mile (9.65 seconds at 140 miles per hour of any production car. Oh, and it claims to be the first one to successful pop a wheelie.)

On April 11, Dodge debuted the Demon with explosions, burnouts and a small drag strip. Vin Diesel even made an appearance. 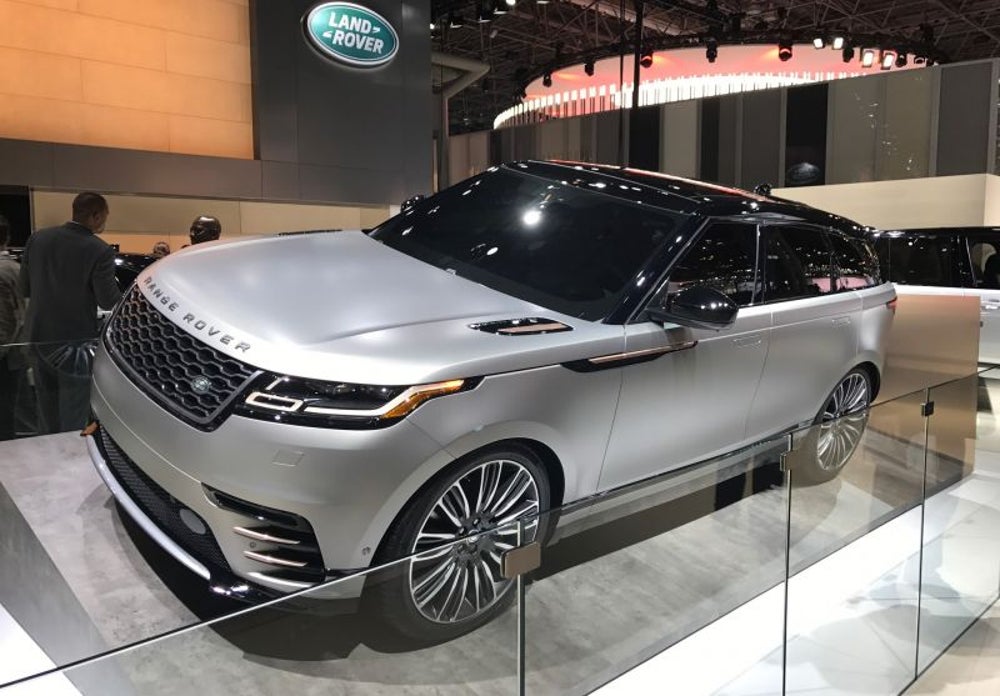 A major theme of the New York International Auto Show is SUVs -- as well as the recurring question, “Will millennials care about them?”

The 2018 Range Rover Velar, which made its first appearance in London last month, is smaller than a Range Rover Sport or full-sized Range Rover but bigger than an Evoque. Its contemporary design incorporates straight lines, copper detailing and optional eco-friendly upholstery made of recycled bottles for today’s conscious consumer. 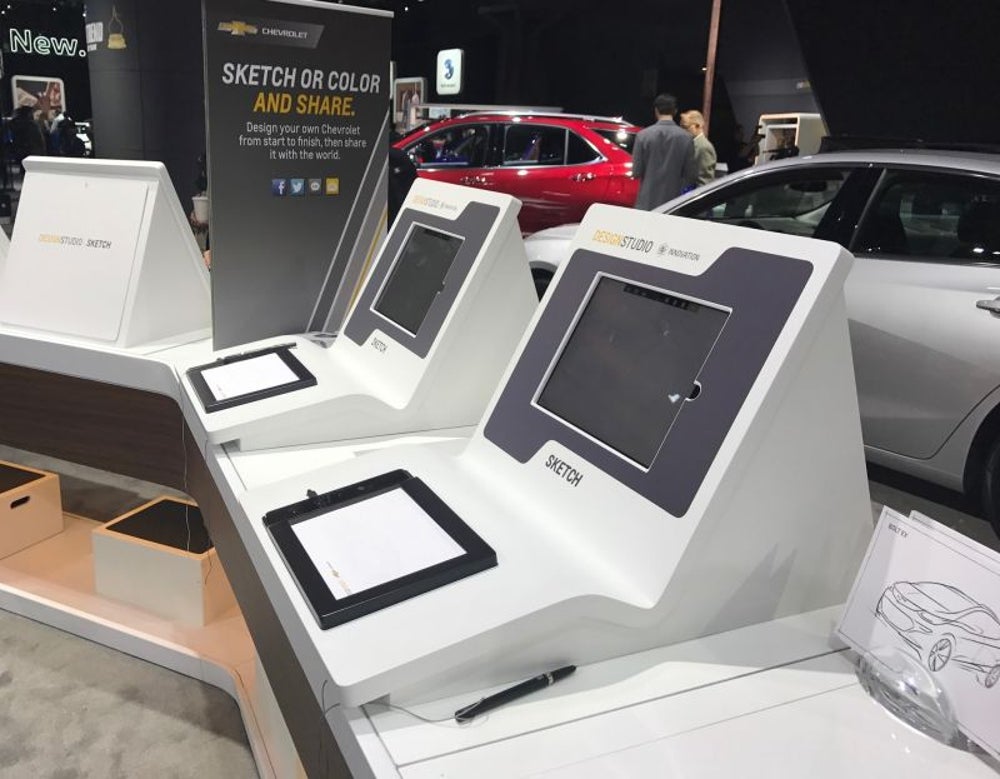 Image credit: Lydia Belanger
The auto show floor featured a variety of activities for visitors, from virtual reality to driving simulations. Chevrolet’s booth includes a “Design Your Own Chevy” sketchpad station. As with nearly all of the hands-on experiences at the show, it encourages users to share their results via social media. 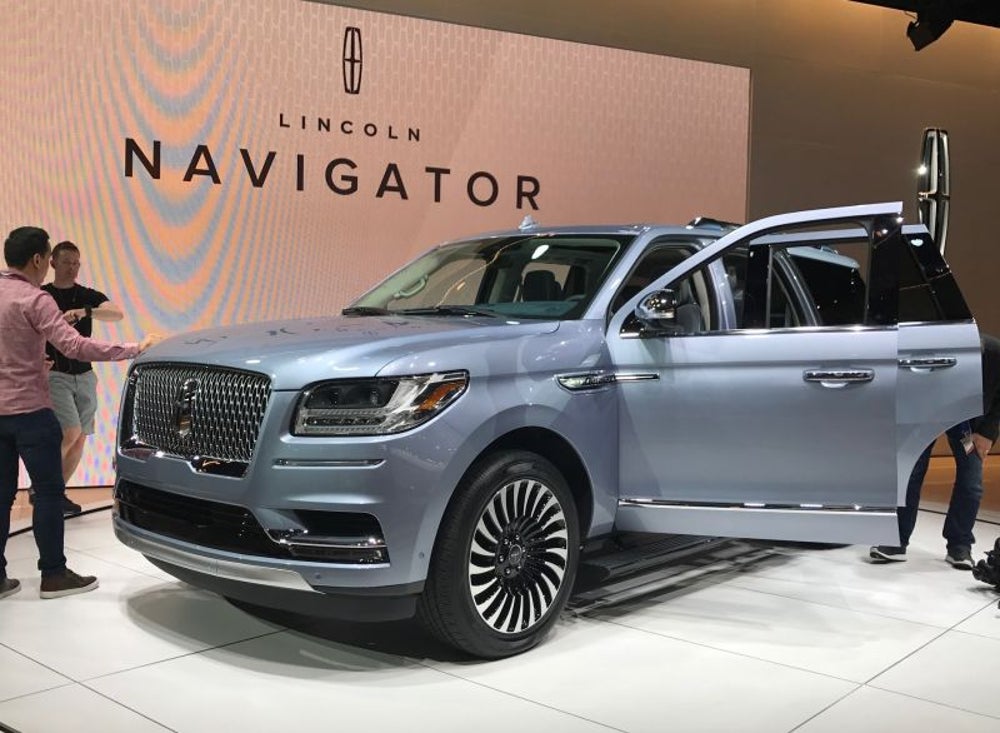 The intended audience for the Lincoln Navigator is affluent young families who seek a “premium ownership experience.”

“This luxury vehicle has the ability to greet you,” according to Kelley Blue Book. “Called ‘The Lincoln Embrace,’ the new Navigator softly says hello by illuminating the Lincoln star on the grille, engaging LED lights in the front and rear and beaming a luminous welcome mat beneath the front doors.” Each vehicle can save up to three drivers’ preferences, including navigation displays, audio settings, climate control and seat and steering wheel positions.

Related: Lincoln Debuts Uber-Like Service, But With Your Own Car

Ahead of the New York International Auto Show, Lincoln announced it’s currently conducting a pilot in Miami for its forthcoming Lincoln Chauffeur service. The program allows Lincoln owners to request drivers to transport them or run errands for them in their own vehicles. 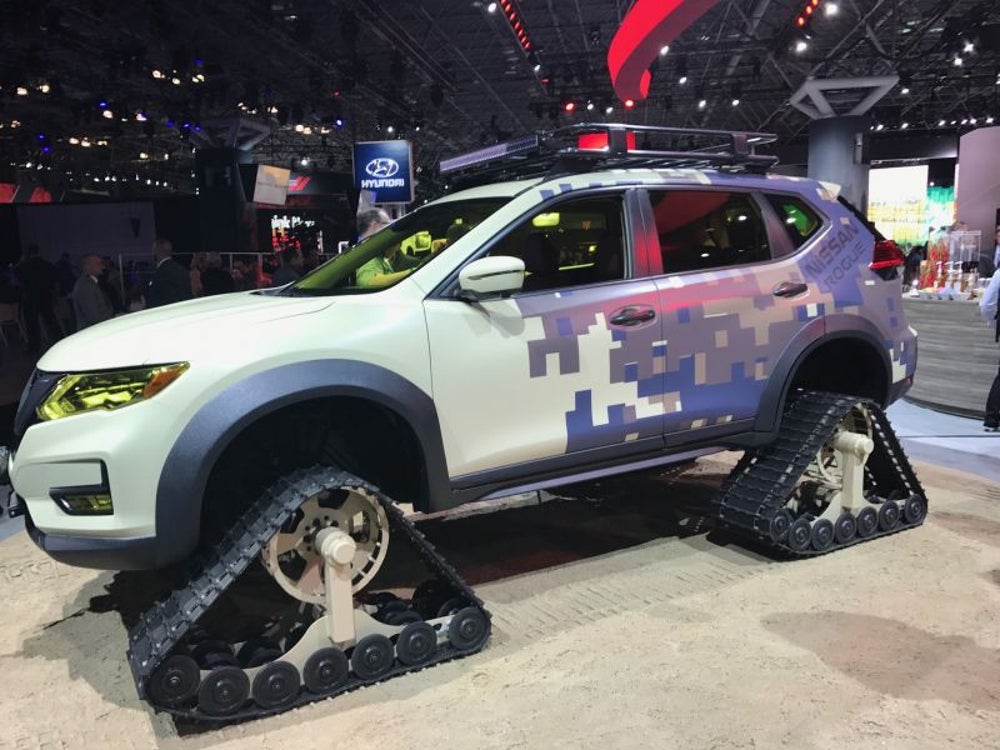 Nissan has displayed Star Wars-inspired versions of its 2017 Rogue crossover at previous auto shows this season, and New York is no exception. The automaker partnered with Lucasfilm to promote Rogue One: A Star Wars Story and also featured a 360-degree virtual reality experience and a Star Wars character-themed digital mirror that functions like a photobooth. 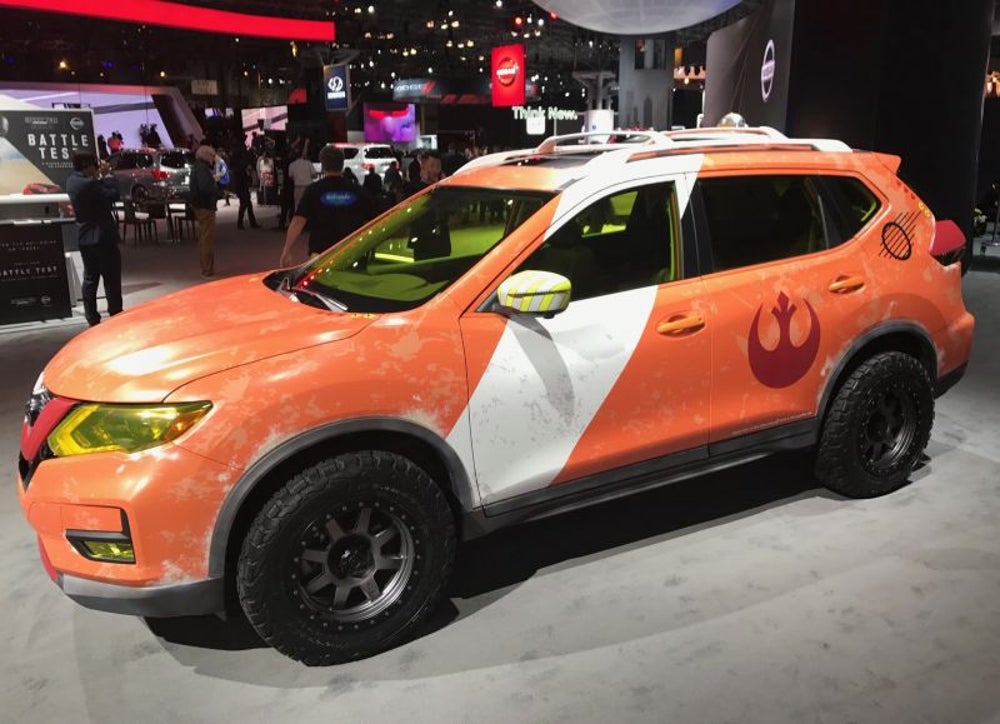 Nissan is displaying various Star Wars-inspired versions of its 2017 Rogue at its booth. This version is based on an X-wing pilot suit. 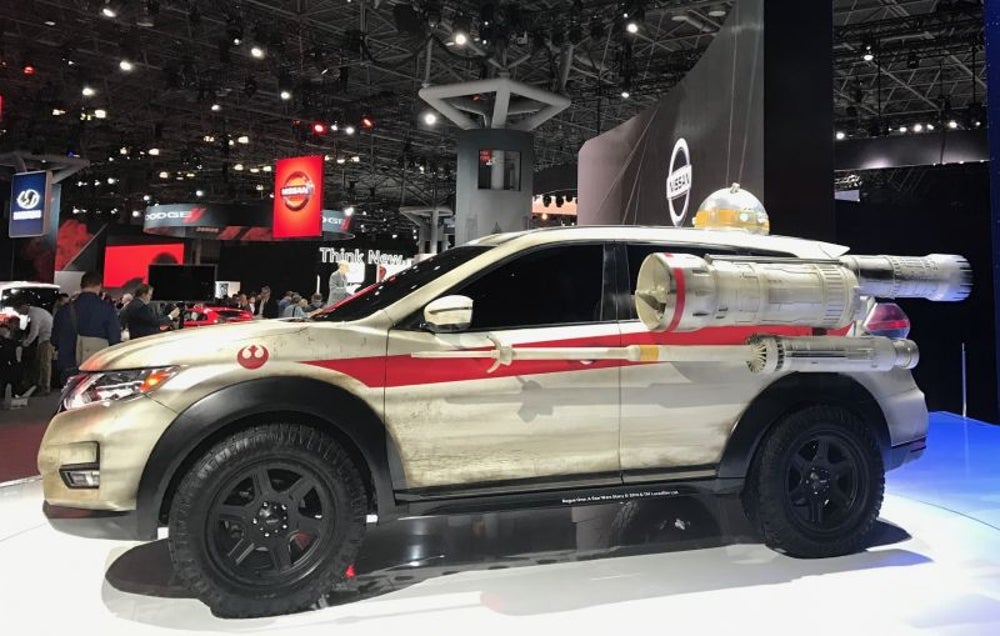 Nissan is displaying various Star Wars-inspired versions of its 2017 Rogue at its booth. This version is based on the X-wing and features thrusters, blasters, side mirror Rebel logo projectors and an astromech droid. 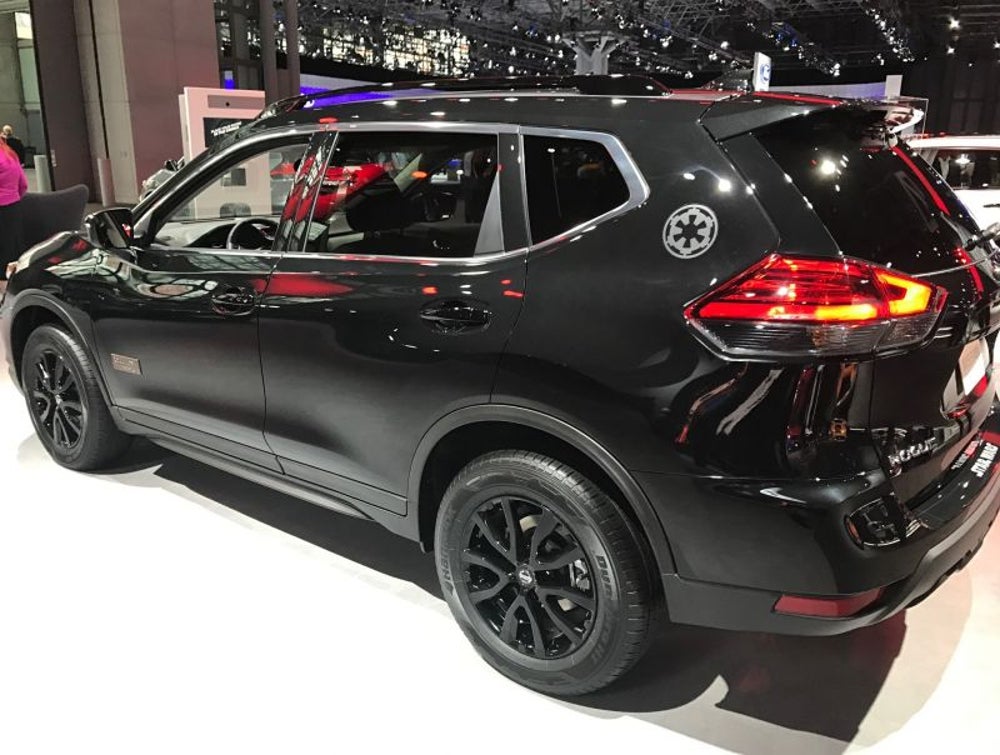 The Nissan Rogue: Rogue One Star Wars Limited Edition is the first production vehicle to include Star Wars elements. Available in “Magnetic Black” (above) or “Glacial White,” it features Star Wars logos on various parts of its interior and exterior. In November, Nissan announced it would produce and sell 5,000 of these models. 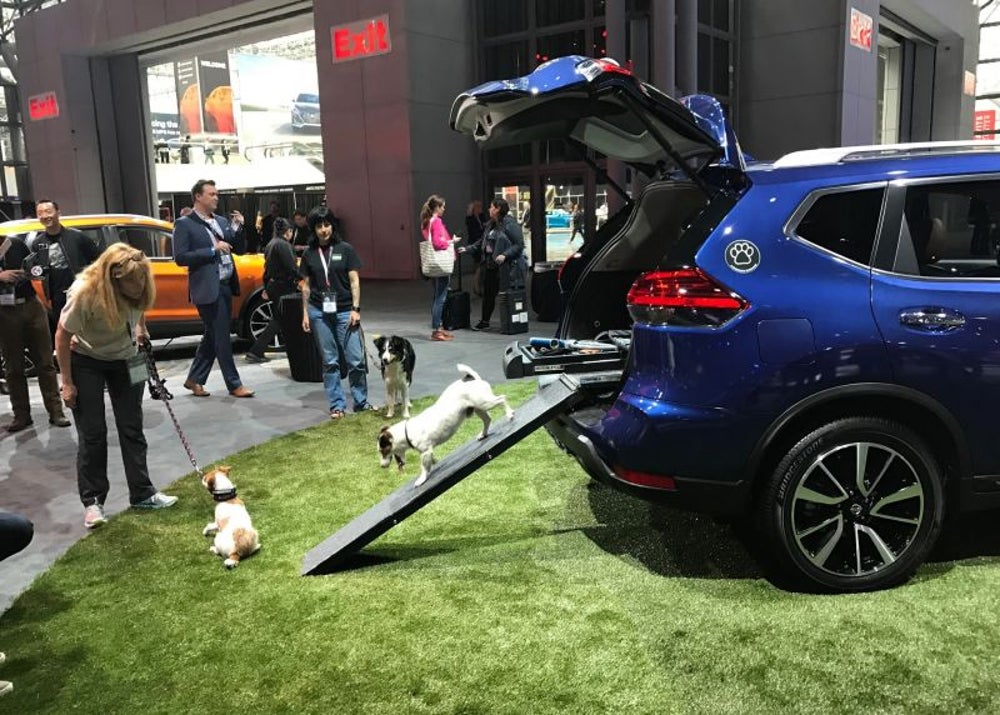 Built by Dennis McCarthy, the car coordinator for the Fast and the Furious films, the Nissan Rogue Dogue aims to make man’s best friend a safe and comfortable co-pilot. Among the one-off vehicle’s many features are a built-in food and water dishes, a removable dog bed, a 360-degree dog wash shower, a dog drying system, a mounted poop bag dispenser, a dog first aid kit and more. 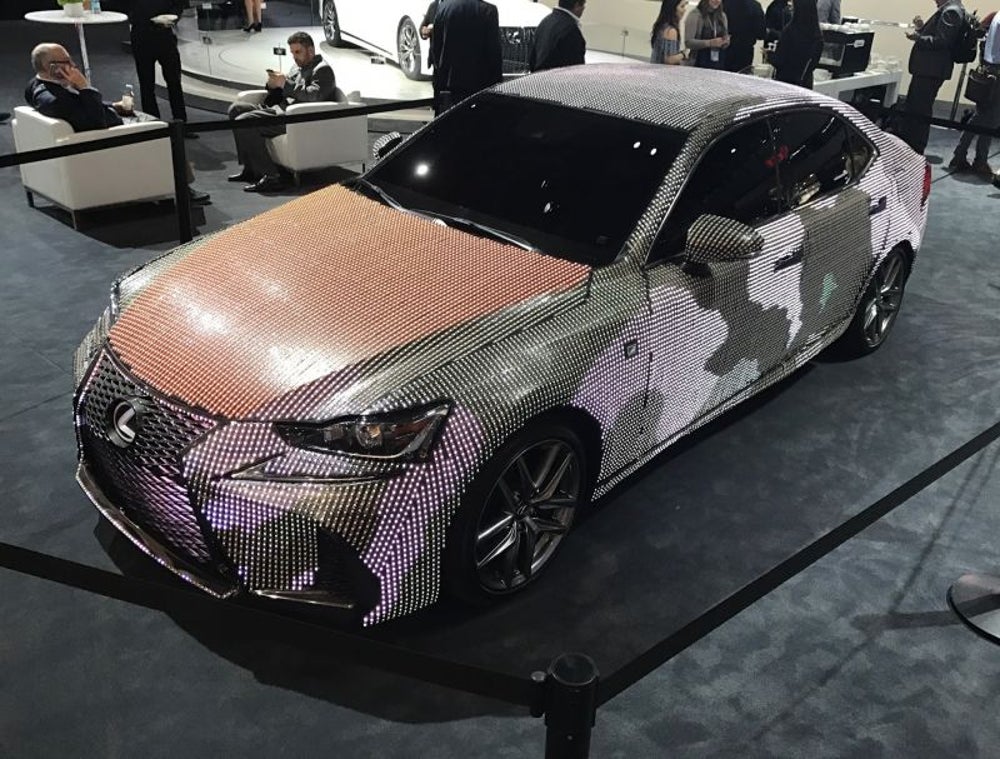 Lexus first showed off its the LIT version of its IS sedan at the Los Angeles Auto Show this past December, but New York showgoers get to see the light show, too. Covered in 41,999 programmable LEDs, the car can broadcast animated graphics and videos. It produces 175,000 lumens when fully illuminated, and the LED strips, if placed end to end, would stretch for half a mile.

Designed in partnership with Vevo, the LIT IS is featured in U.K. artist Dua Lipa’s music video for her track “Be the One.” 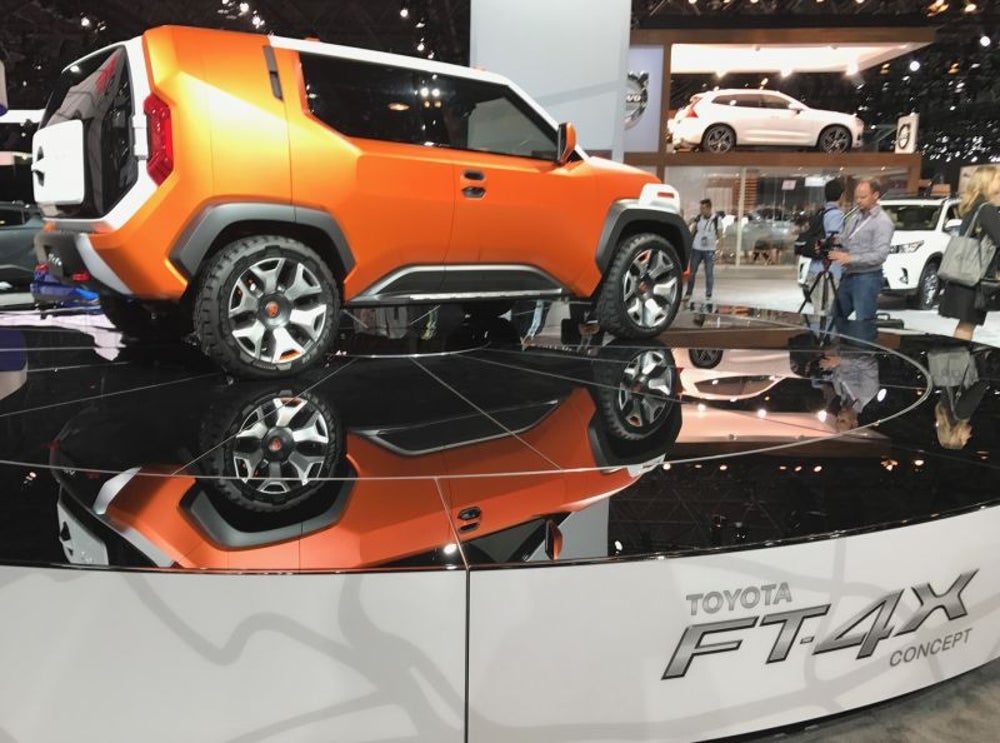 This concept car’s description is even more interesting than its appearance. Toyota explains that the vehicle is designed for city-dwelling millennials (“intrepid urbanites”) seeking spontaneous, not-too-extreme weekend getaways.

Toyota describes the design as “Rugged Charm” and calls the vehicle a “seamless conduit of popular Casualcore -- rather than hardcore -- outings by anyone, anytime.”

Related: The Auto Industry's 10 Most Disruptive Cars Since the Model T

Check out the press release for yourself.

'I am Toyota USA' 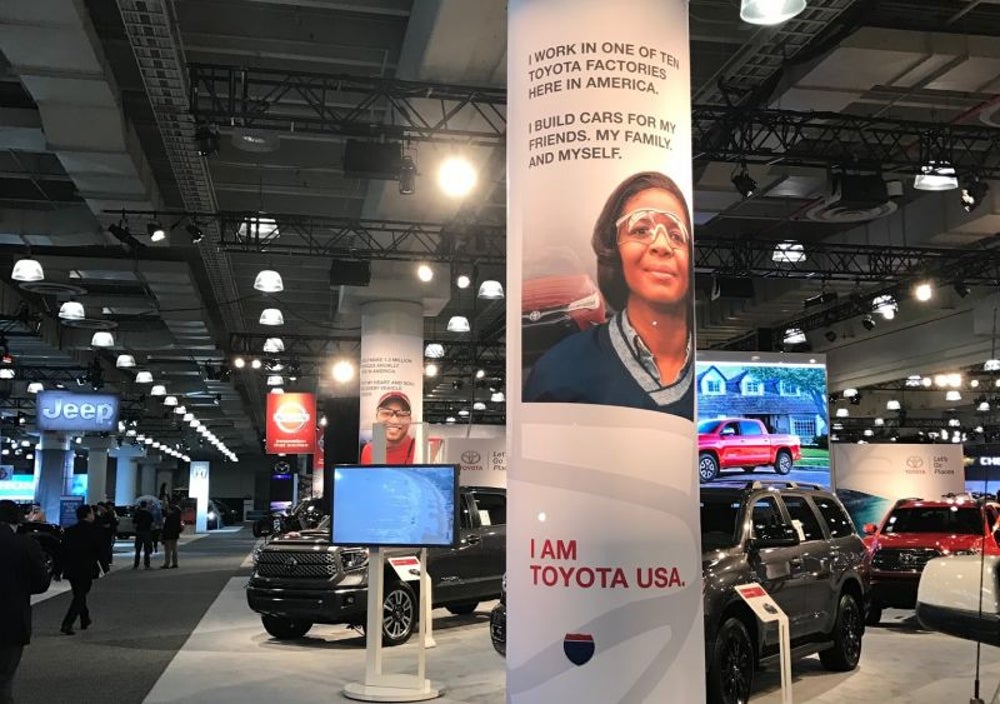 In addition to coining new phrases, Toyota also highlighted its American employees and domestic manufacturing at its display booths. 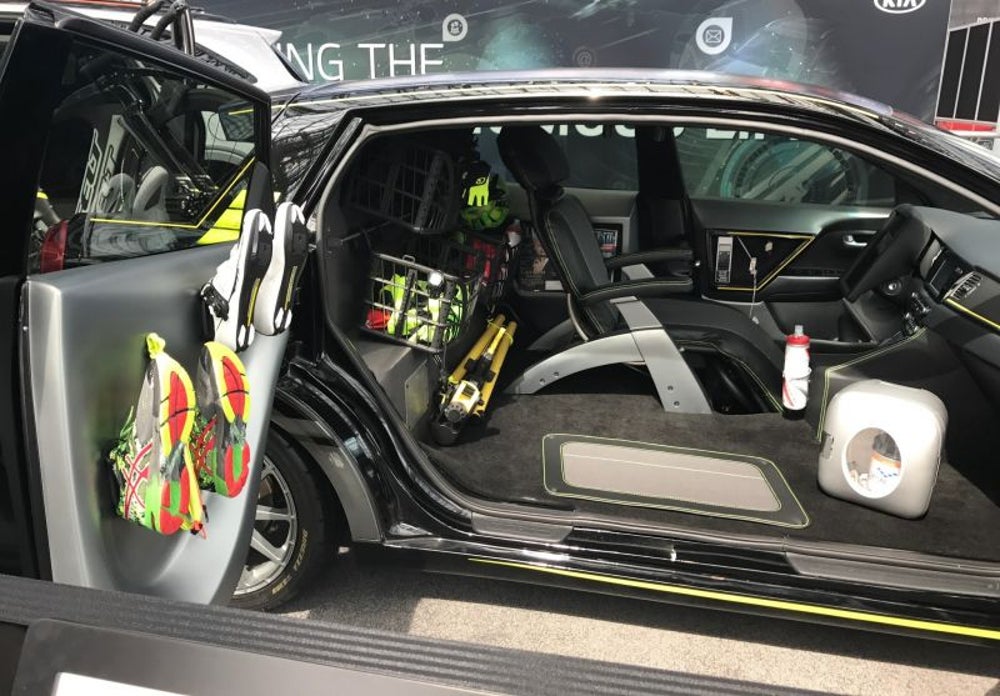 This Kia Niro Triathlon autonomous concept car is triathlete approved. Originally unveiled at the SEMA auto show in November, the car is a trainer that athletes can keep pace behind as it drives itself. The driver’s seat doubles as a massage chair, and in lieu of a passenger seat, the vehicle features a mini fridge and a mini shower to help athletes fuel up and cool down.

Volvo describes a common cause: safety 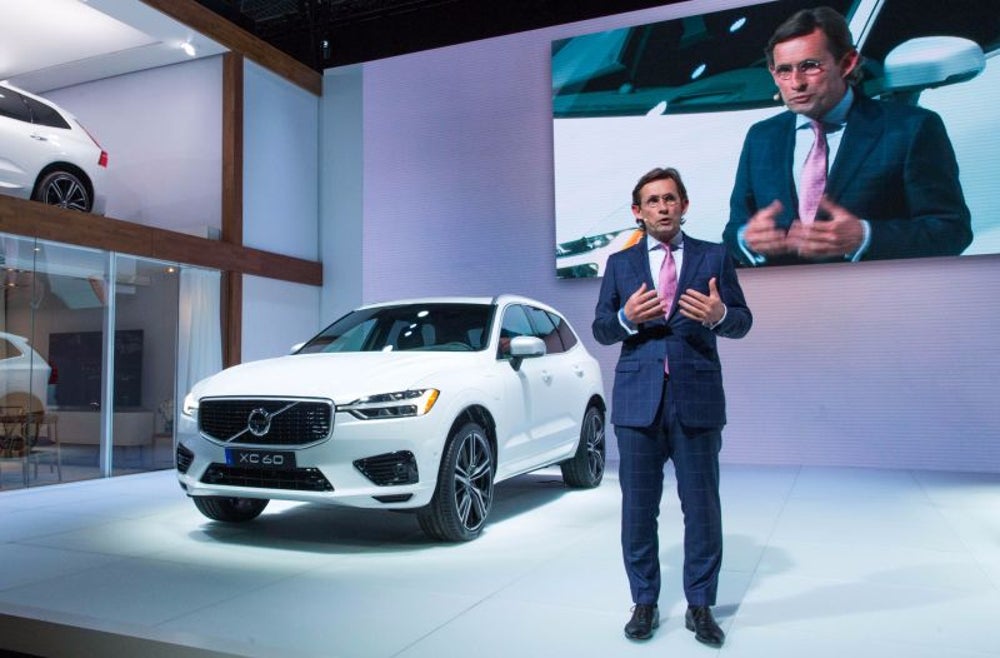 Volvo premiered its 2018 XC60 at the New York auto show, 10 years after the first-generation version of the model debuted. The company has been improving upon its steering assist technology to work toward its Vision 2020, which states that no one should be killed or seriously injured in a new Volvo by the year 2020.

“With rising fatalities, close to 40,000 in the U.S. alone last year, we are obliged, as an industry, to do more,” said Lex Kerssemakers, president and CEO of Volvo Cars of North America, during a press conference at the New York show on April 12. “And therefore, we recently called on governments and our friends at other car manufacturers to join together in sharing traffic data to improve global traffic safety. And of course, the rapid technological developments in the area of autonomous drive will also further contribute to reduce these dramatic numbers of fatalities.”