In this series, Instagram Icon, Entrepreneur speaks with the individuals behind popular Instagram accounts to find out the secrets of their success.

Two years ago, Leslie Mosier worked as a freelance graphic designer and social media marketer in and around the music industry in Nashville, Tenn. After she started to realize that her dog was getting more likes than her on Instagram, she decided to make managing Doug the Pug her full-time job.

It’s a decision that has paid off. The adorably expressive dog, combined with Mosier’s dedication to regular posting, penchant for puns and flair for art direction, has turned Doug the Pug into quite the cottage industry.

Doug has 2.6 million followers on Instagram and won this year's Shorty Award for Instagrammer of the Year.

In 2016, Mosier published a book, Doug the Pug: The King of Pop Culture, which became a New York Times bestseller.

Mosier says that the most gratifying part of the experience has been seeing how much Doug resonates with people.

“It's one thing for a video to get 10 million views. It's another thing to go to these meet and greets and meet all of Doug's fans and to hear their stories. I can't tell you how many moms have come up to me and told me ‘we have a pug because of Doug.’ Or ‘Doug got me through a really hard time,’" Mosier says. "It's more than just an Instagram account to people, it's really a family thing. It's bigger and better than I could have ever imagined.”

We caught up with Mosier to get some insight into how she has developed Doug’s instagram following and grown her business.

1. How did you get your start with Instagram?
I actually started with a personal Instagram account that I would post photos of Doug on. And it really didn't take long for me to realize that the followers that I had only wanted to see photos of Doug. And those photos of Doug were getting featured on these really large dog Instagram accounts and getting tons of likes. So as soon as I made Doug his own account, it exploded and now we are where we are today.

2. What other platforms do you use and what percentage of the time do you spend on them vs. Instagram?
The other big platforms are Facebook and Twitter. Doug actually has the most amount of followers on Facebook -- he has almost 6 million on Facebook. We put a lot of time and thought into everything that we post on all of the accounts, but we definitely use Instagram the most. I feel like it's more current with the trends and it's easier for me to engage with our fans and the celebrities that also follow Doug. It's been a great tool to connect with other big Instagram accounts.

3. What makes Instagram a better platform than other social media?
I think Instagram is amazing because it's filled with creative people. They want to be putting out really awesome content. It's kind of like a photo reel of your life or your passions, whereas Facebook, while we love it obviously, it's you know filled with pretty much anything you think of -- politics, personal things. I think Instagram is more of like a real inside look to someone's brain if they use it the right way. People who take it really seriously, it really shows.

4. How much of your time do you devote to it?
Our full-time job is Doug the Pug. So I could technically say all day, every day. But I would say several hours a day and that's not including the time it takes for us to do photo shoot and video shoots. We're constantly trying to come up with new content, trying to figure out what's trending and what we can do differently from other accounts out there.

5. How do you promote your account? What's your number-one way to gain followers?
We do everything organically. I'm proud to say we've never spent money on an ad. We've gained the most followers whenever we collaborate with other big Instagrammers or celebrities and personalities. Whenever we do that cross promotion of content it always gives us a new audience to engage with. It gives us a whole new fanbase to connect with and that's definitely how it grew so big.

I remember after we collaborated with Justin Bieber a few years ago. He posted on Instagram two photos of Doug wearing Calvin Kleins, holding up this little sign that said "What do you mean?" [for his album]. That day alone we gained like 60,000 Instagram followers. It really shows you it's all about who you get in front of.

6. How do you engage with others on the platform?
Messaging and commenting back to people and commenting on other people's photos. Sometimes it's kind of easy to get lost in your own account and forget that you should still be talking to the other people that you follow. So remembering to do that is a big thing.

7. How often do you post?
Twice a day since I started the account and we haven't missed a day in two years. We've played around with the times a little bit, but twice a day is kind of what we've always done and I have an inner fear that if we start doing only once a day then it will all change. There are days when I don't feel creative or we don't know what to post and that's when our best content comes. I think if we didn't put that on ourselves to post twice a day, it wouldn't push us to think of a new things to post. I think that's really important for people who you don't know where to start with Instagram. Force yourself to get out of your comfort zone and post even if you don't know what you want to post.

8. What's your content strategy?
So we post photos twice a day and post two videos a week when we aren't traveling a ton. That's dwindled down over the past few months because we have been so busy with our travel schedule. We're finally able to get it back up and running. As far as the content goes, we just try and make sure that it's all as cute and relatable as possible. We put a lot of thought into the caption as well. And any time we can do a pun, we’re going to do a pun.

9. How has your content strategy evolved as Instagram has added features?
It's pretty standard with photos and videos but Instagram Stories have been a really awesome tool. I think it gives Doug's fans a more behind-the-scenes look into the day-to-day life of Doug. We're able to post things that we would never really post on his actual page or post to Facebook. It's like Doug lying in bed or at a meet and greet with all of his fans. It's an awesome tool.

10. What's your best storytelling trick?
I would say our videos are the best way to tell a story. Obviously, Doug can't speak, that's why we love doing videos because they show Doug's personality and how good he is at acting. It's one thing to see a photo of him, but when you see a video of him it's something else. He's just doing things that not any normal dog would do, like know how to pose and act like that.

11. How do you set yourself apart from others on the platform?
We try and be as creative and original as possible. There are a lot of other dogs on Instagram. Our thing with Doug is we play off of pop culture and position Doug as a human trapped in a dog's body. He has his own human personification now from the captions and we want the fans to feel as though they can relate to him rather than he's just a cute dog.

12. How do you leverage your Instagram and to what extent do you monetize it?
We have incredible fans that follow us on Instagram. Instagram is really the easiest and the best way to let them know when we have a new product out. We have our book, Doug the Pug: The King of Pop Culture, which came out in November. It made the New York Times bestseller list. And we also just released a new coloring book and have a line of plush toys and shirts.

I think that's the best way to monetize for us is to use it a tool to show people when we have new toys and new books and all that stuff. And then people are able to tag products when they come come out. Like the coloring book, we've been seeing so many people posting photos of the page that they colored. It's like the coolest thing because we can engage with them on it and it's like a constant conversation. We don’t only want to make money, we want to make people really happy and luckily our products can do that.

13. What advice do you have for other Instagram influencers or people who want to build brands on the platform?
Definitely be consistent. Don't take days off. The way I see it, if you take a day off, that's one whole day where your followers aren't reminded of your name and an opportunity is missed for someone to share your content with their friends.

14. What's a misconception many people have about Instagram?
I think a lot of people will stumble upon these big Instagram account and just think that it happened overnight and that it's like super easy and if you take really nice photos you're just going to have millions and millions of followers. It takes a lot of dedication and work and patience. It's taken two years for us to get a following that we have. And that's, like I said, posting every single day and just working our asses off. 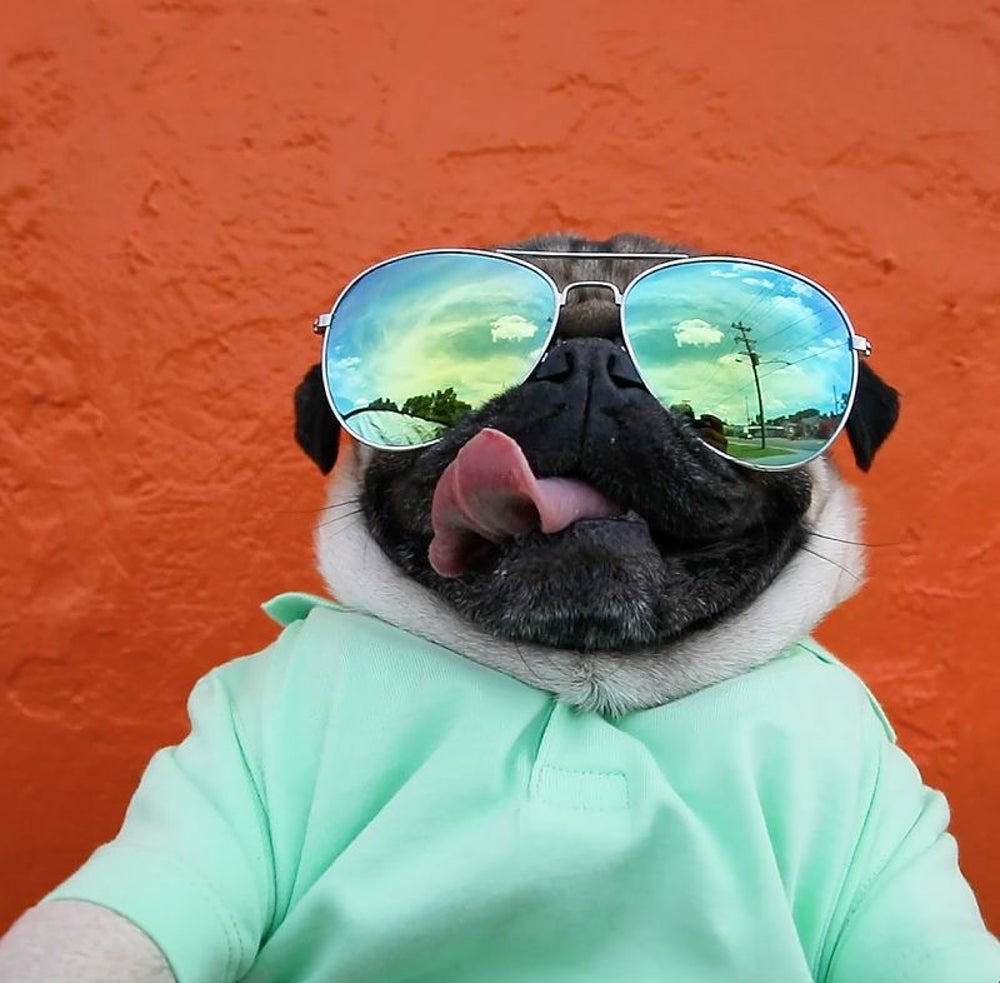 Image credit: Courtesy of Leslie Mosier
"'Despacito' is an incredibly popular song right now - #1 in the world! By adding Doug’s “guitar” and him looking happy while dancing, plus the pun 'Despugcito,' it essentially created the perfect storm for it to go viral." 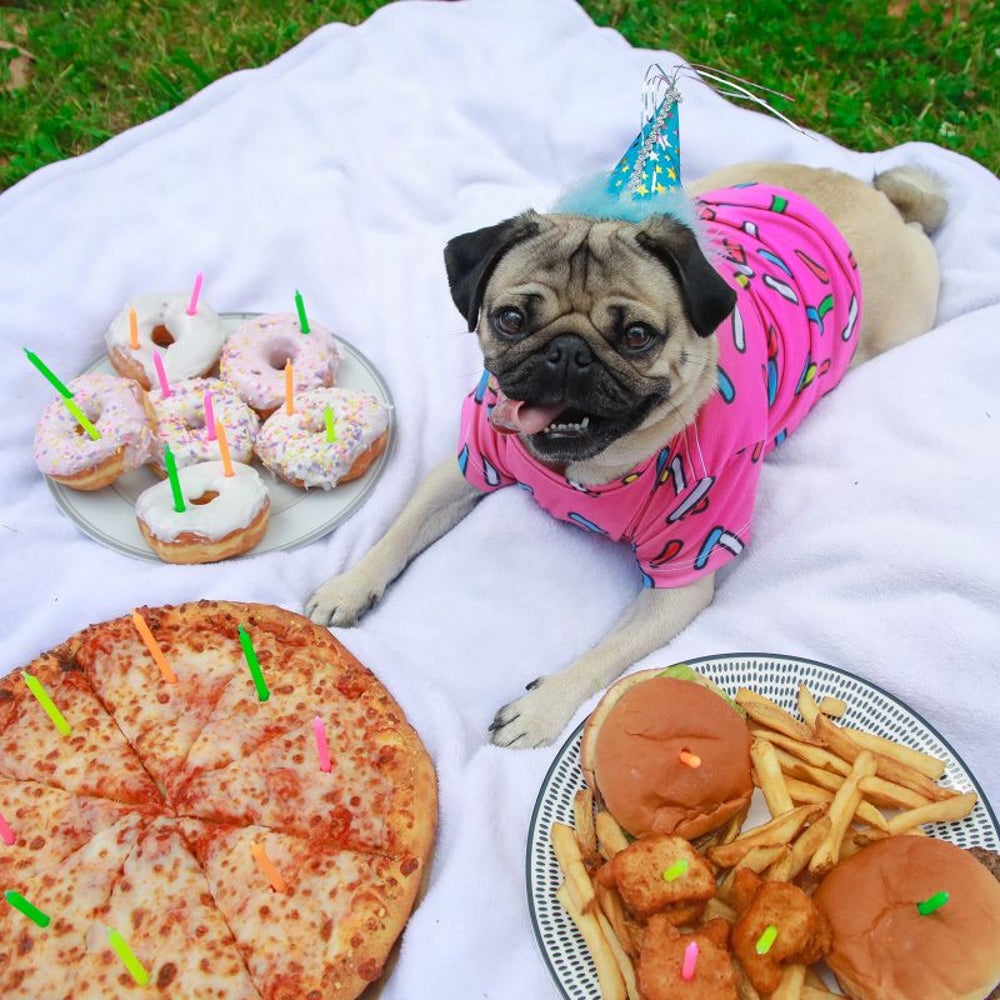 Image credit: Courtesy of Leslie Mosier
"I posted this on Doug’s birthday. It is a picnic of all of Doug’s "favorite” foods and fans were very eager to wish him a Happy Birthday." 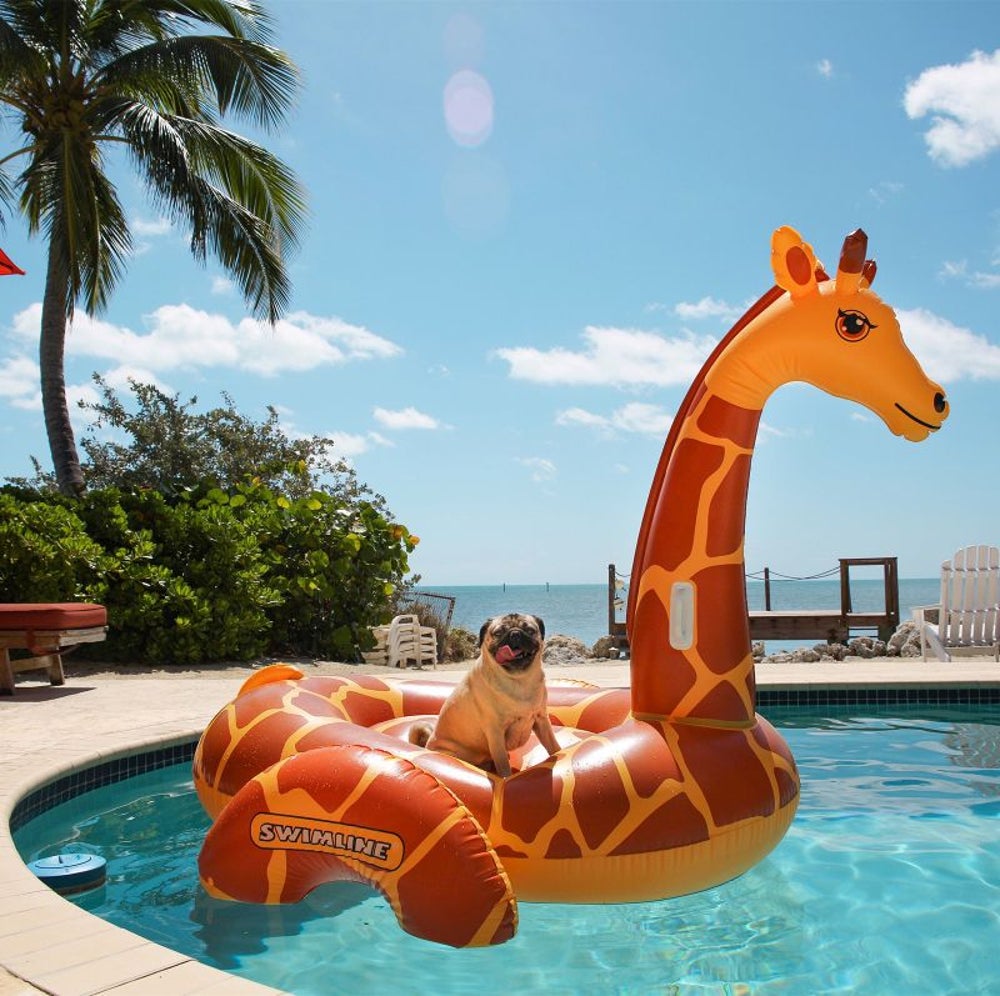 Image credit: Courtesy of Leslie Mosier
"With the scenery and a popular pool toy, this post got a ton of likes and shares." 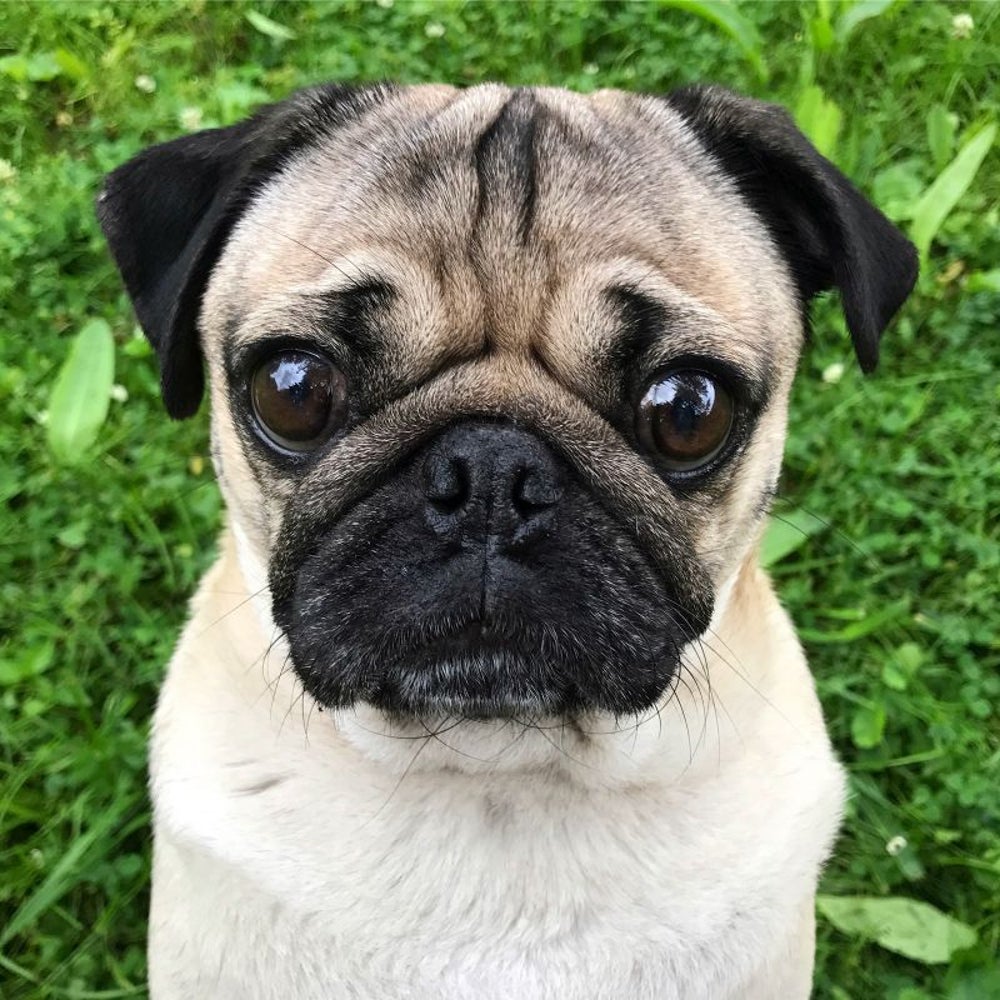 Image credit: Courtesy of Leslie Mosier
"Doug’s eyes look massive and adorable in this photo and I think it really drew people to like it and go 'aww.'" 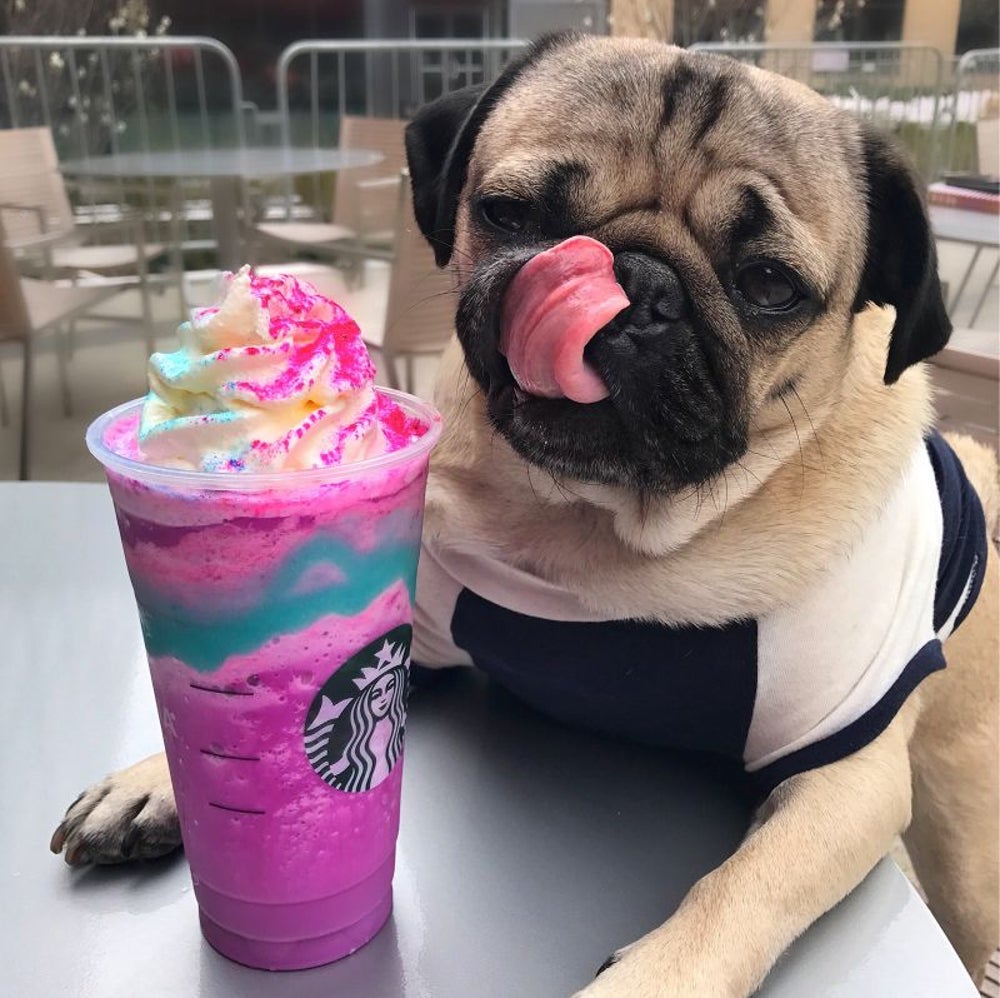 Image credit: Courtesy of Leslie Mosier
"We posted this the day the Unicorn Frappuchino went viral. It got an insane amount of likes and shares and was picked up by some news outlets."
More from Entrepreneur

'Influencer Fraud' Costs Companies Millions of Dollars. An AI-Powered Tool Can Now Show Who Paid to Boost Their Engagement.

Busy Philipps Shares the Mindset That Pushed Her to Success