The 15 Craziest Cars and Futuristic Vehicles of CES 2019

There were a ton of sleek next-gen cars at CES, from snazzy luxury vehicles to eye-popping concept cars.
Next Article Add to Queue


CES is a dizzying experience that takes over the entire Las Vegas Strip, but within the bedlam is a mind-bending glimpse into the future of transportation. This year we saw a slew of self-driving cars, new in-car mixed reality experiences, and even a new concept car with modular robotic legs that's as close as we've seen to a real-life Transformer.

There's a flashy tech product at CES for every kind of transportation scenario, from the most futuristic science-fiction concept cars to next-gen electric vehicles and even motorcycles, not to mention last-mile solutions like electric skateboards and scooters. Many of the snazziest concept cars were focused on high-tech amenities and interiors designed to keep humans comfortable and relaxed as their autonomous car cruises.

We also came across some other eye-popping smart vehicles, like a flying drone helicopter taxi and a smart yacht. We threw those in just for fun. 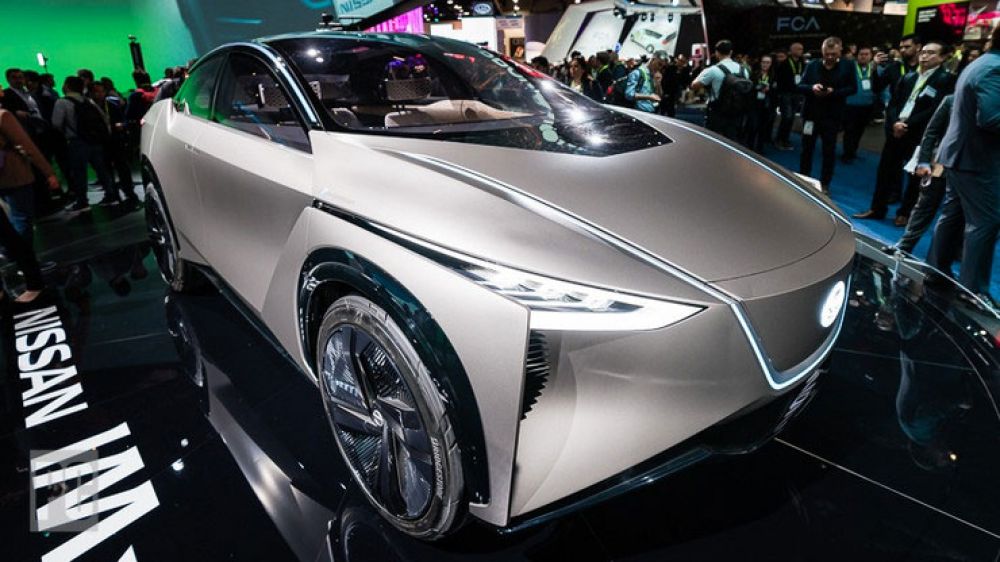 Image credit: PC Mag
Nissan's IMx Kuro concept vehicle is a fully autonomous electric crossover with zero emissions. We likely won't see it in production until at least 2020, but the Kuro's simplified exterior and spacious interior wowed on the CES show floor; not to mention the car's panoramic OLED display on its dashboard. A separate, wood grain-patterned display wrapping around the interior door trims bring an extra sense of zen to the in-car experience. 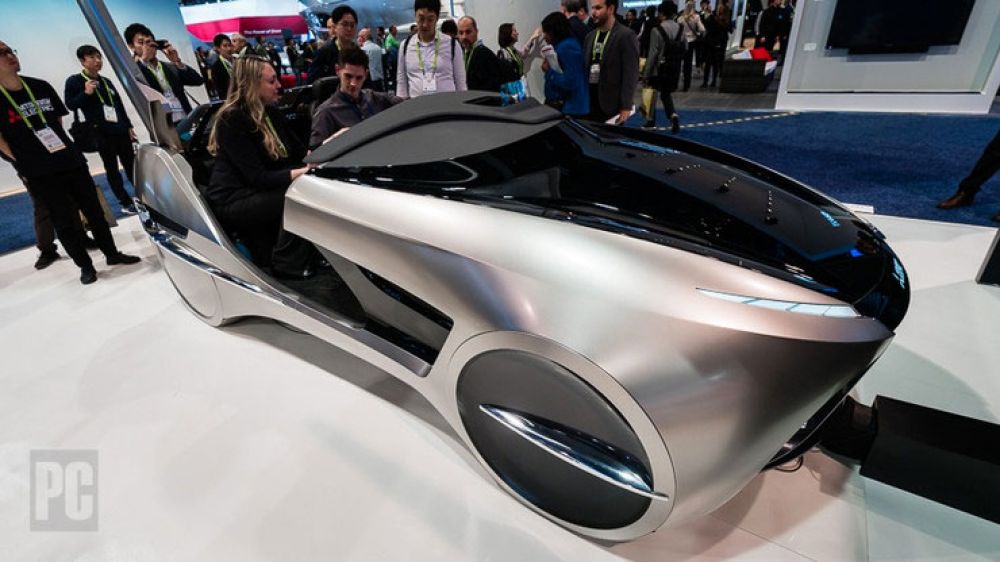 Image credit: PC Mag
Mitsubishi showed off the latest version of its Emirai 4 smart mobility concept car, which it has brought to CES with flashy new upgrades for each of the past few years. It's got a heads-up augmented reality display with 3D mapping, as well as a half mirror with a diagonal LCD panel to give the driver 3D images of the environment. There's an autonomous mode too, and plenty of other interior bells and whistles, like haptic feedback control, smart home and mobile payment integration, and biometric authentication. 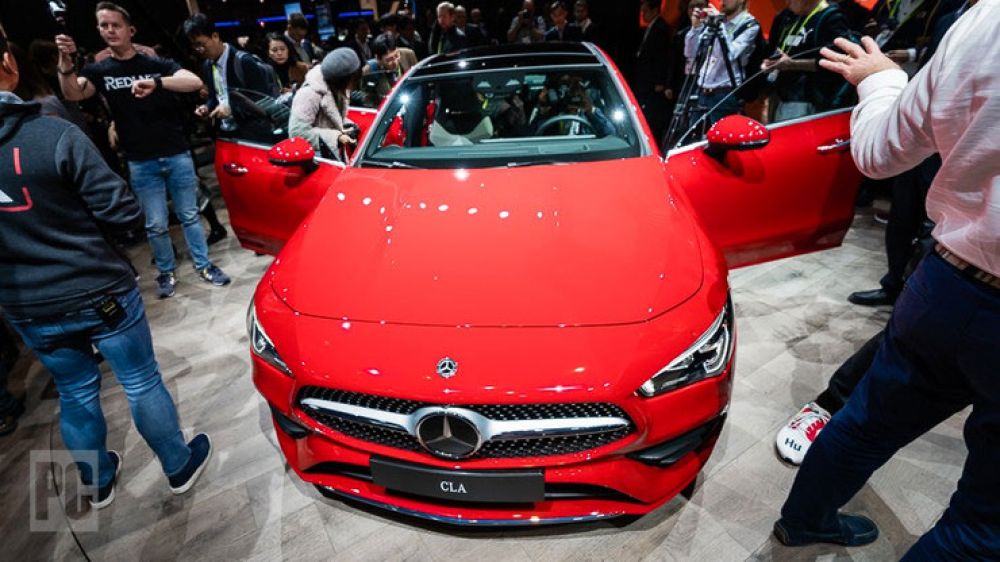 Image credit: PC Mag
The highest profile vehicle reveal for a car you can actually buy was the debut of the 2020 Mercedes-Benz CLA. The second-gen coupe comes with a bevy of digital features and in-car improvements, as well as Mercedes' first semi-autonomous driving system with a hands-free mode, and the auto maker's new MBUX voice control system. It also syncs with the newly announced Mercedes-branded Garmin Vívoactive 3 smartwatch. The 2020 CLA will go on sale later this year; official pricing has not yet been announced. 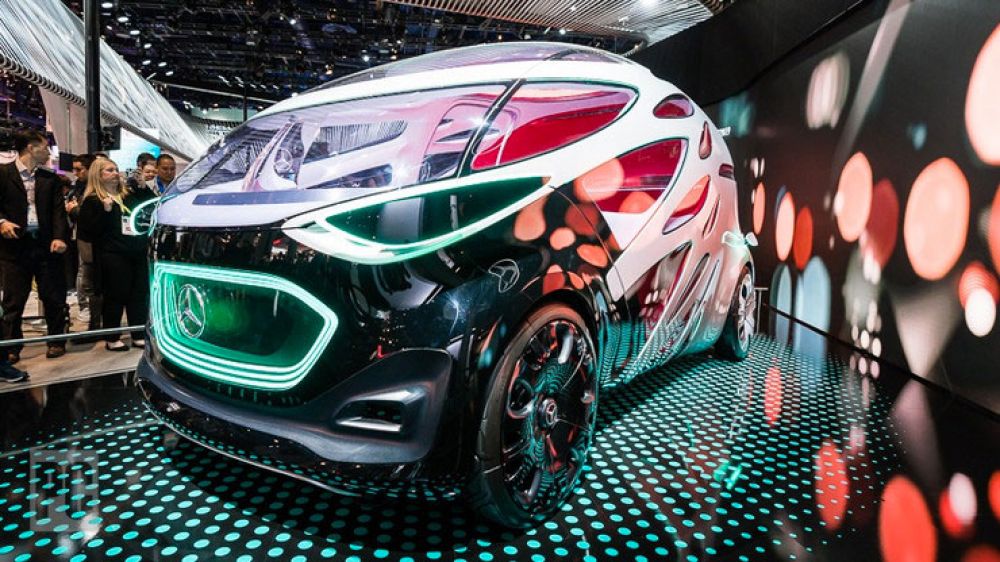 Image credit: PC Mag
Mercedes also had a futuristic concept vehicle of its own, the Vision Urbanetic autonomous driving platform with switchable bodies. The vehicle's Tron-like exterior houses a fairly simple urban transportation concept: it can be fitted with a passenger module with room for 20 people (8 sitting, 4 standing) as a sort of ride-sharing taxi, or a cargo module for transporting freight goods or package delivery. The base of the vehicle is the part that's doing the autonomous driving; it also houses the electric batteries, motors, and the Urbanetic's propulsion system. It's an adjustable minibus (for either people or cargo) in a trippy body on a self-driving base. 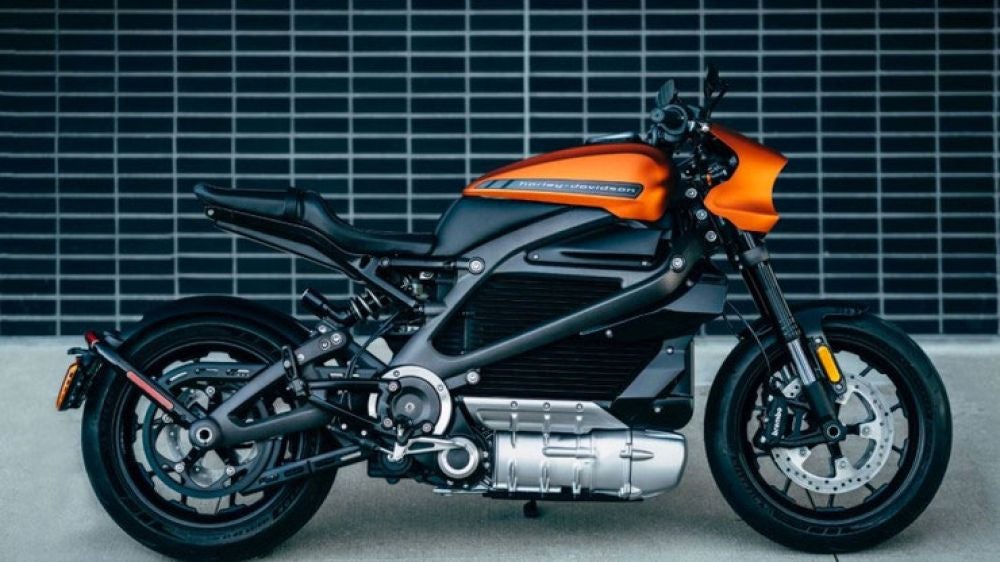 Image credit: PC Mag
The maker of American muscle hogs has released its first-ever electric motorcycle. The Harley-Davidson LiveWire, built in partnership with Panasonic Automotive, has built-in GPS and LTE connectivity with up to 4G LTE speeds, as well as a 4.3-inch liquid crystal touch-screen display built into the dashboard with integrated navigation and music. The LiveWire bike itself has a muscular build and a lightweight body, and goes from zero to 60mph in under 3.5 seconds. It has a high-voltage battery with an estimated range of 110 miles per charge. 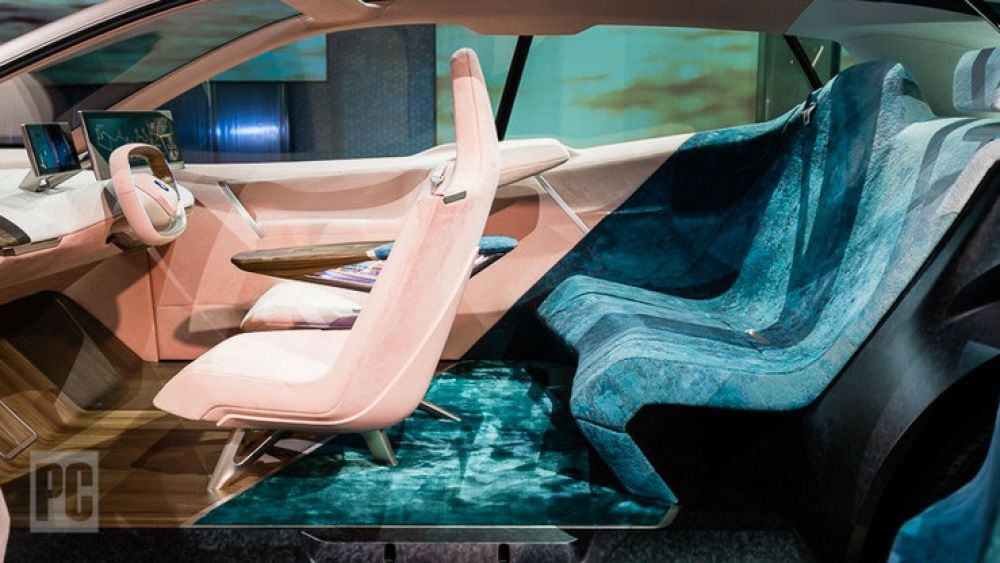 Image credit: PC Mag
One of our favorite concept cars of CES, the BMW Vision iNext is a sci-fi living room on wheels. The autonomous, electric luxury vehicle has hidden touch interfaces in wooden and cloth surfaces, an intelligent voice assistant, and screen projection anywhere in the chic interior. With an intelligent voice assistant built in, a roomy, carpeted back seat, and a smart wood coffee table that responds to touch gestures, it's a palatial Jetsons-like experience for a future when humans are lounging in their cars instead of driving. 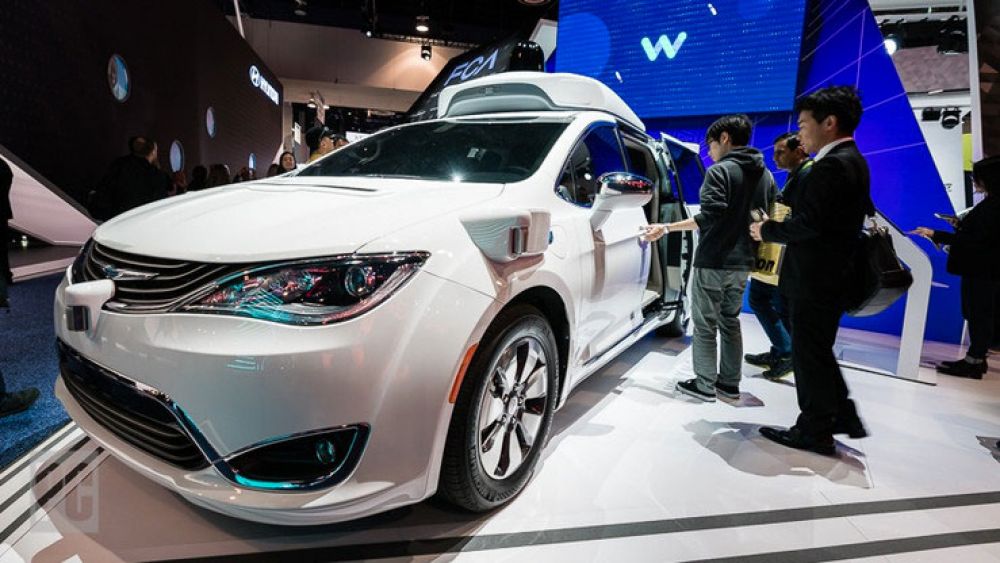 Image credit: PC Mag
Alphabet's Waymo self-driving car service was showing off an autonomous minivan on the show floor, outfitted with Lidar arrays and a camera installation on the roof. The offshoot's new Waymo One is the autonomous division's first commercial self-driving service offered to hundreds of early riders who have been helping to test the technology. 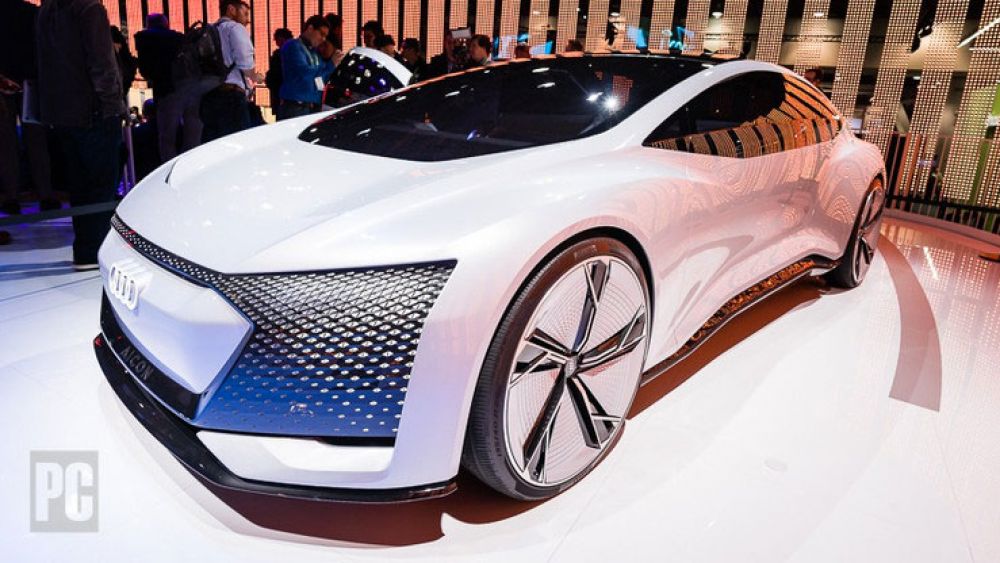 Image credit: PC Mag
First unveiled in 2017, this electric autonomous vehicle was one of the sleekest we saw on the show floor. The concept car, which Audi hopes to turn into a production vehicle by 2021, has four motors and a range of 435 to 497 miles per charge. Audi said it can charge up to 80 percent in less than 30 minutes wirelessly. The interior showcases a fully self-driving future -- there are no pedals or steering wheel visible, just luxurious indoor seating and a transparent roof. 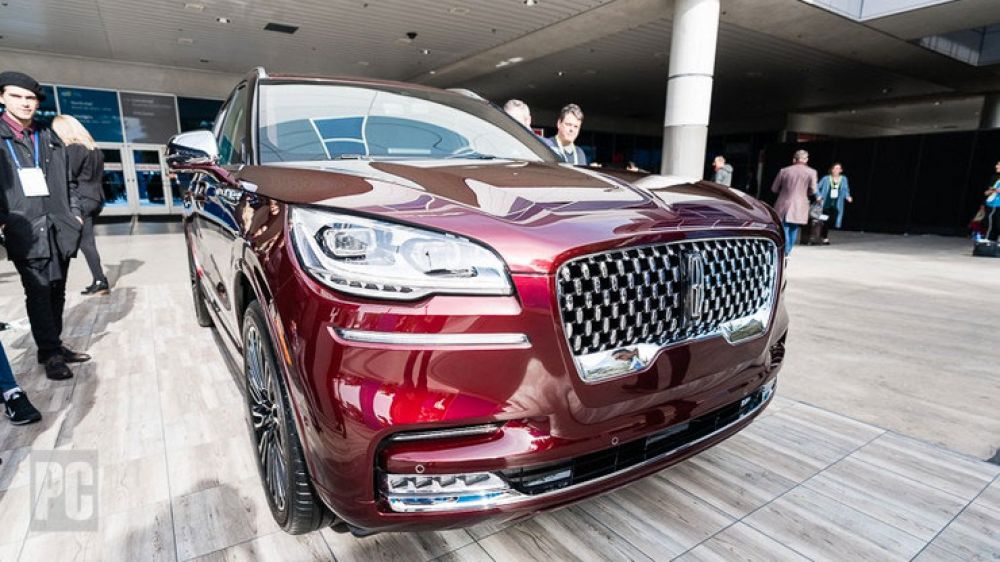 Image credit: PC Mag
Lincoln was at CES with the 2020 Lincoln Aviator, a 450-horsepower plug-in hybrid crossover. There's a 3.0-liter twin-turbocharged V6 engine, and a host of tech improvements and smart user interface upgrades. Drivers can unlock the vehicle with their smartphones rather than a key fob, and the owners can tap into features like traffic jam assist, park assist, adaptive suspension, and drive modes like Conserve and Excite to add some automatic controls to the manual experience. It's also got a 28-speaker Revel Ultima 3D audio system. 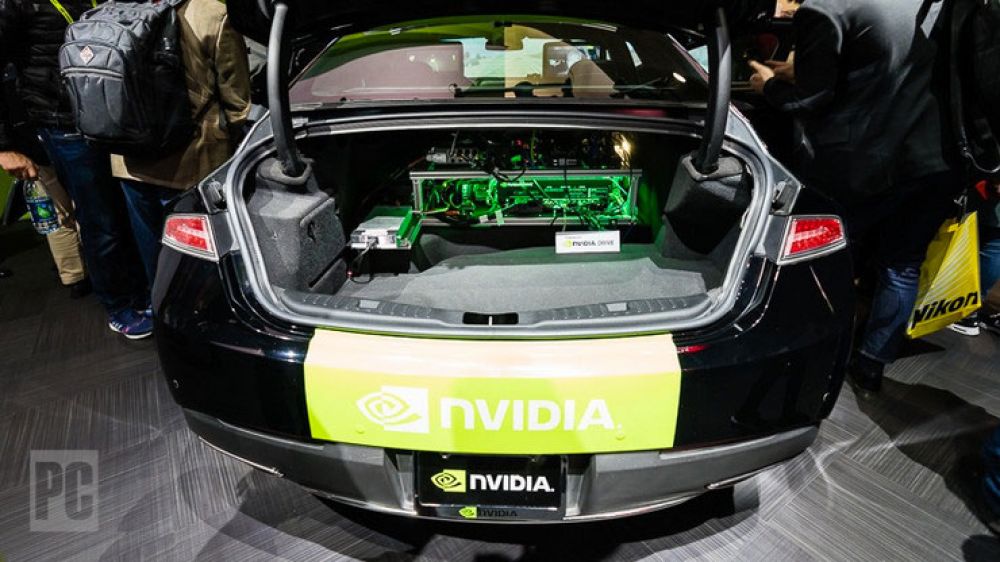 Image credit: PC Mag
Nvidia showed off a souped-up autonomous vehicle with its new Drive Autopilot system at CES. The graphic card manufacturer's Xavier automotive-grade hardware can be integrated throughout the vehicle -- including a heavy duty computer in the trunk -- to enable Level 2 autonomy, meaning it has driver-assistance systems to control acceleration, braking, and steering to help out human drivers. 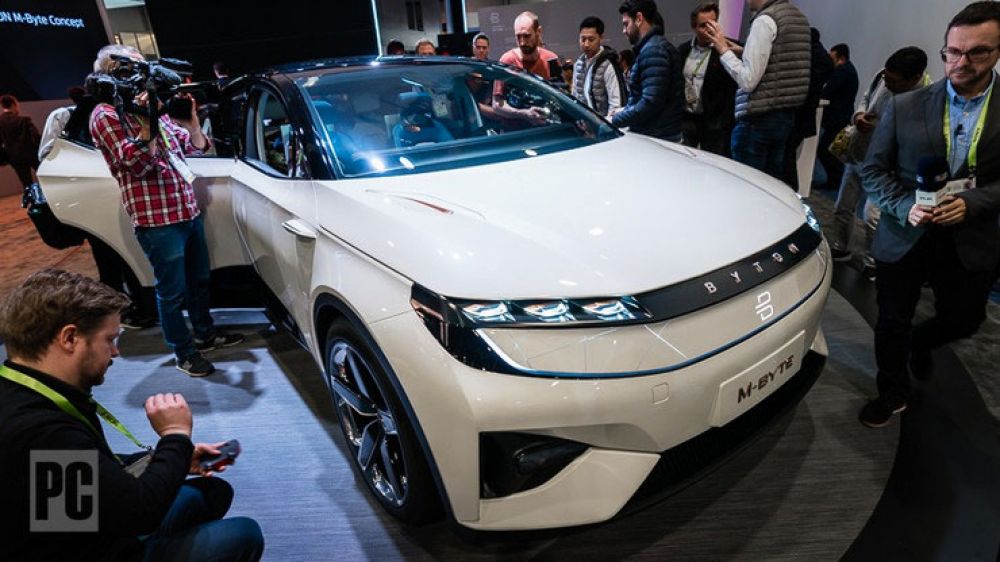 Image credit: PC Mag
Tesla competitor Byton showcased two different autonomous, electric models this year. The M-Byte prototype, which debuted at CES last year, is the less expensive of the two, a $45,000 electric crossover that goes into production this year. It has a 48-inch touch screen stretching across the entire dashboard, a small touch display in the wheel, and an array of cameras all housed in a luxury SUV body. 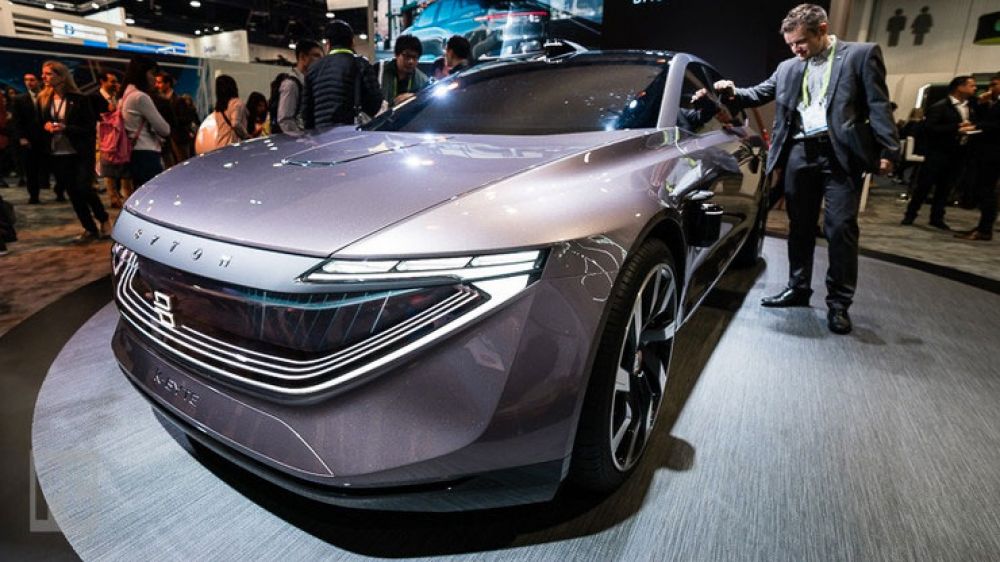 Image credit: PC Mag
The Byton K-Byte premium sedan is coming in 2021 with Level 4 autonomous driving, meaning it can drive without human oversight. The K-Byte features similar interior touch screens plus a digital grille on the exterior. Unlike other self-driving cars, the Byton's side "LiGuard" sensors are retractable when it's not in autonomous mode. Both cars will have Amazon Alexa integrated into the Byton OS. 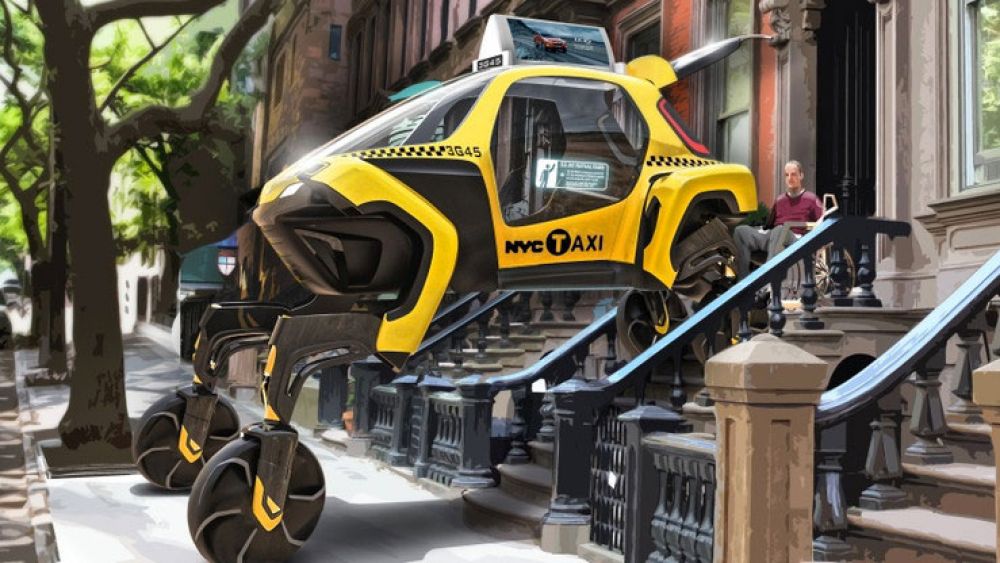 Image credit: PC Mag
The Hyundai Elevate is the closest we've gotten to a real-life Transformer. The concept car can walk or climb over obstacles with extendable robotic legs on a modular, multi-use chassis that shrinks down into driving mode. The car can swap out different attachments, and is capable of climbing a 5-foot vertical wall or over a 5-foot gap while keeping its passengers level. By blending electric car and robotics technology, the Hyundai Elevate feels like a step toward sci-fi. 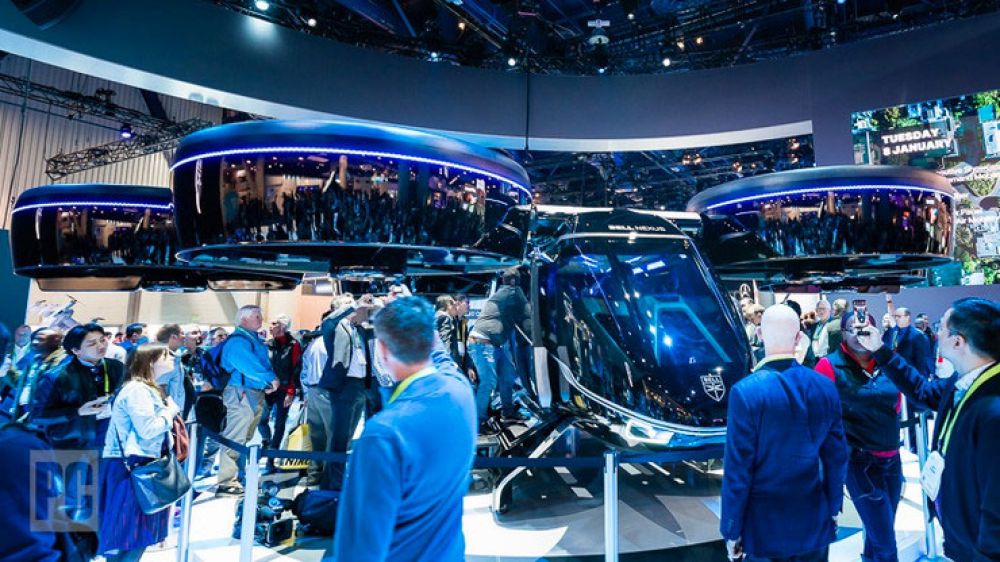 Image credit: PC Mag
One of the most unconventional, eye-catching concept vehicles at CES this year was the Bell Nexus Air Taxi, a massive flying hybrid of a drone crossed with a helicopter. Bell describes this behemoth as a rideshare in the air, and is testing it in Dallas, Dubai, and Los Angeles. The electric hybrid has a range of 150 miles, but don't expect to see it flying around anytime soon. Bell hopes to release it in 2025. Sitting in the high-tech cockpit flanked by high-res touch screens and control sticks, the Bell Nexus feels like it's dropped straight out of a futuristic fleet on its way to drop off a squadron of Darkseid soldiers. 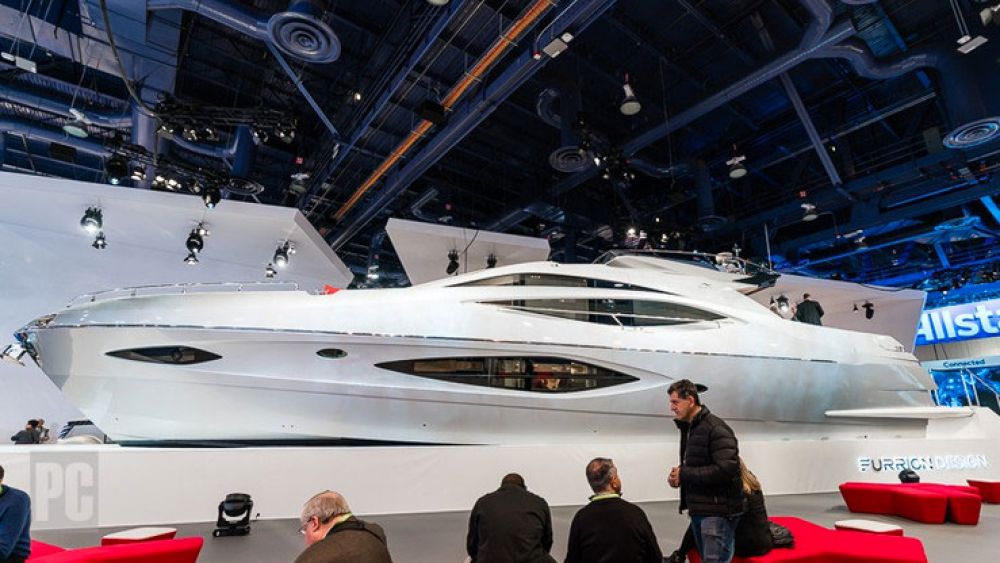 Image credit: PC Mag
We had to include the yacht. The 78-foot Furrion Adonis towered over the CES show floor, showing off a high-tech luxury cruiser that Furrion calls a "smart yacht." The Adonis has an onboard, voice-activated AI called Angel, who can control electronics, entertainment, kitchen appliances, the yacht's facial-recognition camera system, and more. The virtual concierge can be summoned by saying "Hi, Angel" to order food from the kitchen, control music, get news and weather updates, or shop. The Adonis is also packed with smart interactive mirror displays throughout the yacht and cabins and Furrion Sense TVs with built-in soundbars. It's even got a drone and drone port on the top deck. If PCMag gave out a Bougiest Tech at CES Award, the Furrion Adonis would be the runaway winner.