Legendary basketball coach John Wooden may have created his Pyramid of Success nearly 60 years ago, but many of his former players, including Kareem Abdul-Jabbar and Bill Walton, say it's still relevant in their daily lives.

By Kristin Edelhauser March 27, 2007
Opinions expressed by Entrepreneur contributors are their own.

At the age of 96, living in Encino, California and making 20 to 30 speeches a year, former UCLA coach John Wooden still keeps in touch with more players than he could name in one breath, including Bill Walton, Andy Hill, Kareem Abdul-Jabbar, Keith Erickson, Keith Wilkes, Mike Warren, Kenny Washington and John Vallely. And those are just the ones he has breakfast with on a regular basis. But that only seems natural for a leader whose "Pyramid of Success" includes friendship, loyalty and team spirit as three of its 15 blocks.

Wooden has been called the greatest college coach in history thanks to a long list of accomplishments, including a record 10 NCAA Men's Basketball Championship titles. But for him, it's not about the number of wins and losses: It's about how the game is played.

In fact, his players say they don't recall their coach ever stressing the importance of winning a game. For Wooden, it was about sticking to the fundamentals. "On the first day of practice, I remember him saying, 'I'm not going to be talking to you about winning or losing because I think that's a byproduct of our preparation. I would much rather be focused on the process of becoming the best team we're capable of becoming,'" says John Vallely, who played under Wooden on the 1969 and 1970 UCLA national championship basketball teams.

Building the Pyramid of Success
Wooden's famous philosophy on coaching and life has become ingrained in the minds of his former players and continues to guide many of their lives today. But Wooden didn't create the pyramid with basketball in mind; he worked on it over a 14-year-period, aiming to create a new definition of success. While teaching high school English, he saw parents criticizing their children for receiving less than an "A" or "B." That's when he knew he needed to find a way to pass on his message that success isn't just about how much stuff you have or how powerful you've become; it's about finding peace of mind. 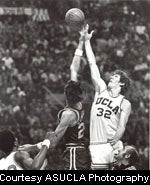 After completing the pyramid in 1948 while coaching at Indiana State University, Wooden coined his definition of success as, "Peace of mind which is a direct result of self-satisfaction in knowing you made the effort to become the best of which you are capable." Wooden says that even though he had new ideas about the pyramid throughout its building years, the cornerstones--industriousness and enthusiasm--have always remained constant.

But he adds that the strongest part of the pyramid, in his coaching experience, is the very heart of it: condition, skill and team spirit. "I've always had very well-conditioned teams. For my drills, I didn't do them by running a lot, just by creating drills that were competitive and consistent, day after day," Wooden says.

It's those very drills and practices that Wooden finds himself missing the most since retiring from UCLA in 1975. "I haven't missed the games; I haven't missed the tournaments," he says. "I've missed the daily practices, because that's where you got to know your players and got the chance to establish rapport that you hoped would be lasting." 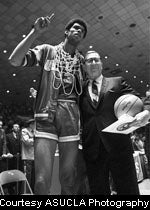 A Lasting Team
Even Wooden probably didn't expect the level of rapport he ended up building with his former players, many of whom are still working to spread his message. Bill Walton, who played for Wooden from 1972 to 1974 on two NCAA championship teams, now works as a broadcaster for ESPN, but finds time to speak to others about Wooden's life lessons. "John Wooden and the pyramid are there so much, they've become a part of me," he says. "That's when you know that it's your job to become a teacher and pass that message on."

Kareem Abdul-Jabbar, known as Lew Alcindor during his playing days at UCLA from 1966 to 1969, says he incorporates aspects of Wooden's philosophy into his own coaching as a special assistant coach for the Los Angeles Lakers. "My approach, for example, with Andrew Bynum, follows along the same lines of Coach Wooden's teachings of preparation and grasping the fundamentals, and I've tried to help him develop the basics he needs to continue improving," Abdul-Jabbar says.

What the Pyramid Means to Others

But, as his players have found out, the Pyramid of Success isn't just applicable to basketball--it's also relevant to the business world, marriage and even health struggles. In his college days, Vallely says he half-listened to the teachings of the pyramid, but has come to value them. "As I look back now, I see it as a parable for life. In order to have a good business, you must know the basics, you must have a certain set of fundamentals that you believe in," he says.

In addition to helping him in the business world, Vallely says the pyramid helped his family cope with losing his daughter, Erin, to cancer at age 12 in 1988. "This whole idea of the Pyramid of Success doesn't mean that you're always going to win. With my daughter, we had a sense of peace that we'd given it everything that we could give. But in that part of our life adventure, we had run up against an opponent we couldn't defeat," Vallely says. 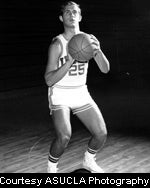 Wooden's philosophy also proved valuable when Vallely was diagnosed with Non-Hodgkins Lymphoma in 2002. "When I was competing against a life-threatening disease, and I couldn't move because I was so sick from all the chemotherapy, somehow I finally learned that it wasn't about winning a basketball game; it was about feeling happy that I had lived a full life and had experienced success in my marriage and in my experience as a father," says Vallely, who is now cancer-free. Since being inducted into the Hall of Fame in October of last year, Vallely has been inspired by others to share his story through motivational speaking and through his website.

Andy Hill is also promoting the power of the pyramid, which may come as a surprise to some Bruin fans. Hill was a member of three NCAA championship teams from 1970 to 1972 led by Wooden, but he spent more time on the bench than scoring points. Looking back, Hill admits, "Not playing was the best thing that ever happened to me."

It didn't seem like it at the time, though. Hill left UCLA somewhat bitter toward Wooden and his college basketball experience. But 25 years later, after becoming successful in the TV industry as the president of CBS Productions and Channel One Network, he realized Wooden was the one who taught him the principles he was implementing in his life. So Hill made what he says was the toughest phone call he's ever had to make, thanking Wooden for his guidance. The two now talk regularly, and Hill is spreading Wooden's ideologies to others as a motivational speaker, life coach and author with the help of his website.

From the Court to the Boardroom
When asked for his advice on business, Wooden guides entrepreneurs to the top of the pyramid, where "patience" and "faith" flank the top block--"competitive greatness." Wooden explains, "As an entrepreneur or small business owner, you must have patience, and you must believe. But, you must also have skills, and you have to realize you're going to have to work at whatever it is you're hoping to attain."

Judging from his relationships with former players, perhaps the greatest business lesson to be learned from Wooden is how leaders should treat the people around them. "Make those under your supervision understand that you really care for them, not just for what they're doing in the corporation but that you really care for them," Wooden says. "I think anyone in a supervisor position has to do that." For him, that meant letting his players know they weren't playing for him, but with him as they worked toward a common goal. "My success was largely dependent on the type of youngsters I had under my supervision," he adds.

Hill, in fact, says he learned how to lead by watching Wooden guide his teams to greatness. "The Pyramid of Success is an incredible model for business people," he says. "Wooden's no Donald Trump, and yet his mode of leadership is something that's sorely missed in a lot of companies. The mark of a great leader is someone who's successful over time, and that's just what Coach Wooden has proven to be."

Can't get enough of Bruin fever? Check out UCLA Dynasty, the HBO special featuring Wooden and the players who contributed to this record-breaking era of college basketball airing on HBO March 30 and 31. And don't forget, March Madness continues this weekend as No. 2 seed UCLA takes on No.1 seed Florida on Saturday when the Final Four teams face off.