From Concept to Market--in 10 Months Flat

While traveling, Magnus Hammick often wanted to listen to loud, crisp music from his iPhone, but something was missing. The products he and his friends tried just didn't produce the sound they were looking for--and were too big to carry around. He decided to take matters into his own hands. In late 2009, Hammick developed a pocket-sized speaker that delivers room-filling sound with amplified bass when it's placed on a flat surface. The $80 WOWee ONE connects to anything with a 3.5-millimeter audio jack and has a rechargeable battery with 20 hours of play.

"People don't just sit around in a white room and think up new products," says Hammick, who spent the past 18 years as a product developer. "The best ideas always come straight from the real world."

Since the product's launch about nine months ago, more than 150,000 WOWees have been sold. It's earning critical acclaim from the likes of The New York Times and can be found at many major online retailers, such as Amazon.com and Buy.com. But the road getting there wasn't always easy. Before Hammick even considered moving forward with his concept, he had to step back and seriously evaluate the need for a bass-thumping travel speaker in the marketplace and decide if his idea was fundamentally different.

"Conducting extensive market research is very important at the idea stage," says Brett Strouss, president of the American Society of Inventors . "An idea doesn't cost anything, and tremendous progress can be made through some structured thought, a few hours of research and a few drawings. If your idea doesn't measure up, just be happy you're learning, and find the next problem to solve."

The Legal Stuff
Hammick had attorneys on board from day one to ensure he acquired all of the appropriate rights from his tech partner, SFX Technologies--which actually owns the patent on the audio technology used to create the WOWee. However, Strouss from ASOI says hiring legal help right away is not always necessary. He suggests that people approach an invention like any other investment--as a risky venture.

"Don't spend any money until you've determined that there is a likely return greater than the investment," Strouss says. "There's an appropriate time to hire an attorney, and when you do your homework it will become apparent when that is for your situation."

Estimates are that only 3 percent of patents yield profits greater than the cost of writing, filing and maintaining the patent. Applying for a provisional patent to get "patent pending" status is cheaper, and the full utility patent can be filed within a year.

Timing is important when filing a patent, Strouss says. Since it takes a lot of preparation to properly file a worthwhile patent, he suggests getting everything in order first. "You need meticulous written and witnessed records to prove the date of conception and to show continuous work on your invention," he says.

But, Strouss says, it's just as critical to not wait too long. "If you thought up and documented an idea 10 years ago and now someone has patented that same idea and is marketing it, it doesn't mean you're the inventor."

A patent only gives protection of the invention to the person who filed--it does not stop infringers from copying the invention, according to Strouss. "Crooks will always be crooks and they'll steal your idea--patent or not," he says.

From Premise to Prototype
Hammick's next step was to partner with SFX Technologies to create a working prototype. SFX already had the appropriate technology developed--it was just a matter of implementing it into Hammick's practical, mass-market vision.

"I always feel slightly uncomfortable when people call me the inventor of the WOWee because I really just developed the product to fit with SFX's existing technologies," Hammick says. "There's no such thing as a completely brand new idea--everything comes from many sources."

Hammick's modesty aside, after several versions, a working prototype was born. In a mere 10 months, the WOWee ONE went from a hunch to a full-fledged, marketable product.

Strouss encourages ASOI members to start cheap and try building an initial prototype on their own. Then, when they're ready for something more sophisticated, they'll have more options.

Impressing Investors
Hammick leveraged the staggering statistics on the growth of smartphones and other mobile devices like the iPad to lure investors. Though this often can be an inventor's greatest challenge, Hammick was quickly able to secure capital from private backers. "The funding is always easier if the product is good," he says.

Most people don't have the money to fund an invention on their own, Strouss says, and investors typically need to see proven results before investing in a new product. "It's very challenging to get someone to fund something they don't understand the need for. This is where the inventor puts on the entrepreneur and salesperson hats," he says. "Investors want to understand why this is a better use of their money than everything else they could invest in." Grants and loans are also good funding options--but they aren't secured overnight.

Strength in Numbers
For Hammick, finding good partnerships--from legal to manufacturing and packaging--proved to be the most complicated aspect of the invention process.

"Everyone loves our product, so our greatest challenge was selecting the best partners we could to take the product to market," Hammick says. "You want partners, not just suppliers. Inventors should spend the most time on securing a great partnership base."

The Moment of Truth
Once a manufacturer was nailed down to produce the WOWee, it was time to launch the marketing campaign. Hammick employed Brian Hollowaty, president of SoulR Products, to build brand awareness and retail distribution in North America. The first time Hollowaty saw the WOWee in action, he was blown away. 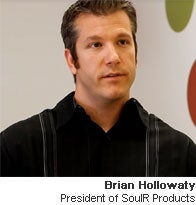 "I kept looking at it and questioning, 'How does this kind of sound come out of this little device?' " Hollowaty says. "The first thing I did was really evaluate the product we had on our hands. We knew it was amazing, but we wanted to keep the message simple and in turn build strategies around that message."

Hollowaty has been working to build a story around the WOWee and find ways to get that story out to people--ideally in person, but more likely online. He wants people to experience the "Wow!" moment he experienced the first time he heard the speaker's crisp, explosive sound. He spends a lot of time creating content to build that experience with demo videos, reviews of new apps that complement the WOWee, and robust discussion on Twitter and Facebook.

Hammick plans to continue to design and develop innovative products in the future. "We want to change the way people engage with the devices they already have," he says. "That's how some of the great companies got started--by giving people much more than the big names delivered at the time."