3 Things About Owning a Bar That Might Surprise You 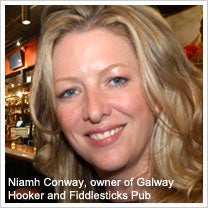 Beers. Shots. Cocktails on the rocks. Friends. Conversation. Any way you slice it, the aim of bars and pubs across the country is to stir up excitement, entertainment and fun.

But aspiring bar owners shouldn't confuse a fondness for their local pub with the ability and passion needed to run one succesfully. While it can be fun and sometimes profitable, owning a pub usually requires long hours as well as attention to detail.

Take it from Niamh Conway, the owner of three Irish bars in New York City. Conway moved from Dublin to New York in the mid-1990s and spent two years managing an Irish pub called Fiddlesticks Pub & Grill before buying it in 1999. Seven years later, Conway opened Galway Hooker, a 10,000-square-foot Irish bar in Midtown named after a sailboat traditionally used in Ireland's Galway Bay. The concept clicked with customers, and Conway opened a second Galway Hooker in 2006.

In a nod to St. Patrick's Day, we spoke with Conway about her journey as a bar owner. She says it hasn't always been predictable. Here are the three things that surprised her most:

1. The pressure. As in other industries, the level of responsibility associated with owning a bar can be daunting. "You are 100% accountable for the staff, guests, investors and the overall performance of the business," Conway says. "We close between 4 a.m. and 10:30 a.m. every day, so it's almost a 24/7 business. You put managers whom you trust in charge of operations when you're not around but, ultimately, you are responsible for everything and everyone on premises."

2. The subtleties in service. This has been a real eye-opener for Conway. "When I was a bar manager, if a server was weak on the floor I would help by giving them a smaller station or schedule him or her during slower shifts," she says. "But as the owner, you think differently, about how everything is affected by the slightest decisions. If I have a weak server on, I think that means a guest is getting bad service, and I get worried about losing repeat business."

3. The business is always on your mind. After Conway became an owner, visiting other bars or restaurants was never the same. "You'll find yourself examining every detail about the ambiance and the service," she says. "You'll want to see the bottom of plates and touch the wall fabric. You're constantly scrutinizing other places, looking for flaws and ideas. It never ends."

How to Build True Resilience Amid a Changing Business Landscape

This Controversial Personality Trait Can Help You Avoid a Business Crisis