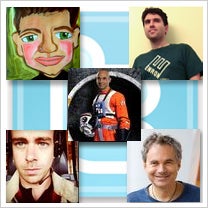 Originally from France, in 2007 Le Meur moved to San Francisco where he launched Seesmic. In addition to offering a collection of social management applications, Seesmic -- through its acquisition of Ping.fm in January of 2010 -- allows users to simultaneously publish content to more than 50 social networks. To date, Seesmic has raised $16 million in venture funding.

It's not surprising that Le Meur is a huge fan of Twitter where his nearly 60,000 followers are regularly treated to the latest tech and VC news as well as cute pictures of his kids playing soccer, or "football" as he calls it.

To stay in the know, Le Meur counts on some heavy-hitters. Here's his list of the top Twitter feeds to follow for digital and new-media news as well as advice for tech startups.

1. @fredwilson
Followers: 159,513
Tweets: 7,340
Fred Wilson is a venture capitalist from New York City with stakes in such web 2.0 powerhouses as Twitter, Foursquare, Zynga and Etsy. His techie tweets cover everything from the latest digital news to his opinions on emerging industry trends.
Sample Tweet: I'm bearish on locker services and bullish on subscription streaming services http://t.co/gBs88Sw

2. @martinvars
Followers: 30,608
Tweets: 11,709
Martin Varsavsky is a serial tech entrepreneur and investor from Madrid. His Twitter feed keeps followers up to speed with the state of the world economy and his latest ventures. An added bonus: He tweets in both English and Spanish.
Sample Tweet: I developed an Android App called RadioMe, it plays my music and social media while I mountain bike. Works great, will share it soon.

4. @jack
Followers: 1,657,913
Tweets: 9,650
One of the co-founders of Twitter, Jack Dorsey recently launched Square, which allows anyone to instantly accept credit card payments through their smartphone. Based in San Francisco, Dorsey gives his Twitter followers a cool, behind-the-scenes look into the inner workings of his two wildly successful ventures.
Sample Tweet: Celebrating #5yrs of @Twitter with the team! @ Twitter http://instagr.am/p/CgpFk/

5. @gaberivera
Followers: 14,169
Tweets: 3,228
Gabe Rivera is the founder of San Francisco-based tech news aggregator, Techmeme. Not surprisingly, he tweets about the latest tech happenings, as well as his opinions on a whole host of digital issues.
Sample Tweet: Modern browsers still can't handle heavy browsing. They slow down, or crash (often due to flash, often not.) When will this software mature?

Who do you follow to stay up on the latest in tech happenings? Leave us a comment and let us know.

Ohngren is a freelance writer in Long Beach, Calif.