Venture Capital in Reverse: The Business Idea First, Then the Entrepreneur

A Kansas City firm turns the traditional VC funding model on its head and captures new opportunities.
Next Article 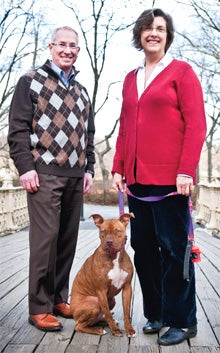 For the dogs: David Rosen and Linda Rhodes of Aratana.
Photo© David Lang

The typical venture capital story goes something like this: An entrepreneur gets an idea and plots out how to turn it into a business. Then he or she goes searching for venture capitalists to fork over dough to fund it.

But Steven St. Peter, managing director of Boston-based venture capital firm MPM Capital, prefers to flip that story around. He uses MPM's funding and resources to locate ideas in the marketplace, then goes out and finds the best people to build the company.

"It's not a formal ‘they work for us and they pursue ideas,'" St. Peter says. "It's a collaboration." And it's working. MPM's model has catalyzed three Boston-area pharmaceutical companies: Idenix Pharmaceuticals, Rhythm Pharmaceuticals and Verastem.

Now MPM has turned its attention to animal health with Kansas City, Kan.-based Aratana Therapeutics, which launched in December 2010. St. Peter recruited Dr. Linda Rhodes, a veterinarian who founded and built animal health research company AlcheraBio and sold it to Argenta, a New Zealand-based pharmaceutical research company; and Dr. David Rosen, also a veterinarian, who was previously an entrepreneur-in-residence at MPM and executive at Pfizer.

Rhodes and Rosen are developing therapies for pain relief and weight loss prevention in dogs. "People are treating companion animals as family members and are more willing than ever before to spend dollars on medical care for pets," Rhodes says. "If you can bring something that's unique to an unmet need or an underserved need in the animal health industry, it's very likely to represent a significant market opportunity."

MPM also lines up funding--for Aratana, $20 million of its own cash plus investments from firms like Avalon Ventures, Cultivian Ventures and the Kansas Bioscience Authority. St. Peter says this model, which focuses on the development of just one or two products, is highly effective. While development of a new animal health therapy from concept may traditionally take 10 to 12 years, Rhodes estimates that Aratana will have its first drug to market in about four to five years.

"I'm a veterinarian. I'm a pet owner. Our animals deserve this kind of innovative medicine," she says. "It's time to take those biotech and chemical breakthroughs that have happened on the human side and translate them to the animal health side."