This Robot Will Do Your Business Traveling for You

Fed up with traveling for business? Anybot's 'personal avatar' can help.
Next Article Add to Queue

The bot:
Don't call it HAL--it's sort of like Skype on a Segway, only more geeked-out. The 35-pound, two-wheeled, self-balancing bot has two-way audio and video so users can interact remotely with co-workers or customers. QB--named thusly because the first model was QA--has a microphone, speakers, a 5-megapixel camera and a GPS-size video screen on its head, which is attached to its mobile bottom with an adjustable pole. QB connects to the internet through Wi-Fi. All users need, Blackwell says, is a web browser to log in to the bot on Anybots.com, and they're able to control the robot's movements with the arrow buttons on the keyboard. Thanks to the simplicity of the system, QB can be used from anywhere, even a laptop at an airport.

"Aha" moment:
At the same time an important client was due to arrive at his office, Blackwell was stuck at an airport in Canada with an expired passport. "I really wanted to greet him and be part of the meeting in a bigger way than I could be on speakerphone," he says. That led Blackwell and his team to hack up a research robot--"this big 200-pound thing with arms and glowing eyes"--that could be used remotely to interact with a client. They've continued to experiment with robotic telepresence for the past two and a half years. 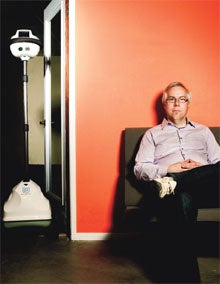 What possessed him:
When he was a kid, Blackwell wanted a robot "to answer the door or get me stuff out of the fridge," he says, but it wasn't technologically possible. So in 2001, finished with Viaweb and ready to take on the next big thing, he began doing open-ended research on robots and founded the 11-employee Anybots, building and playing around with different-functioned robots--and also building and refining self-balancing scooters in the early to mid-2000s. So far, he has put about $6 million into the company.

Why?
"The big manifesto we have written on our whiteboard is, ‘Make business travel obsolete,'" Blackwell says. "It's the No. 1 thing businesspeople grumble about. It wastes resources [and] time. It's difficult internationally with visas." With telepresence, he says, users can feel like they're at their destination, so there's no need to go in person, which eliminates the hassle of traveling.

Customers:
A favorite is Phil Libin, CEO of note-taking and archiving service Evernote, who uses bots to manage his three offices--in Mountain View, Tokyo and Moscow--while he's traveling. Blackwell says QB would also be effective for big manufacturing companies that don't want to send half their engineers to check out a problem at a factory.

Marketing:
It seems to be taking care of itself: TED contacted Anybots to deploy bots at this year's conference in Long Beach, Calif. (and simulcast in New York), which allowed attendees in both cities to mingle through QB. Bots have been dropped off for test-drives at companies like tech blog TechCrunch ("Finally, an Arrington we can stand," the review teases TechCrunch founder Michael Arrington about his proxy). There's even a YouTube video of QB going into a Mountain View coffee shop, posted by "some random guy on the street who thought, ‘Hey, there's a robot going into a coffee shop,'" Blackwell says. "But honestly, we were just hungry for a scone."

Cost:
The standard bot costs $15,000; there's no charge for any of the web services. Units began shipping in April.

Up next:
Blackwell promises continuous tinkering, though he's keeping mum about additional features. The company will also strive for solutions to practicalities like pushing elevator buttons (QB doesn't have arms).

1 Simple Secret for High Performance in 2021

Avoid the Costly Mistake of Assembling the Wrong Leadership Team

Hire Your Next Remote Team Member from One of These 20 U.S. Tech Hubs