A Virtual Business Built on a Piggyback Ride

How three brothers created a business by solving a common kid request.

By Jennifer Merritt July 1, 2011
Opinions expressed by Entrepreneur contributors are their own.

It's 3 a.m. and entrepreneur Wayne Lifshitz is sitting at his computer, a Skype conversation open. His wife, Eva, is getting up to tend to their 1-year-old daughter. "Is that your boyfriend Jonny you're talking to?" she teases.

In reality, Jonny is one of Wayne's brothers and the overnight call is part of a near-daily routine that the pair, along with another brother Bryan, engage in to grow a business that operates remotely from different parts of the country.

The trio collaborates virtually as part of Full Sail International, which Wayne founded in 2007 and later brought Jonny in as partner and Bryan as a regular consultant. The company serves as an example of how business owners are using technology, coupled with ingenuity, to operate virtually and find success.

Before joining forces, the brothers rarely chatted more than a few minutes a couple times week: Bryan lives in Phoenix, Jonny in Lexington, Ky., and Wayne in Bethesda, Md. – and they have eight children between them. Now, they're in constant contact via weekly pre-scheduled Skype calls and a flurry of emails, overnight chats and texts, says 33-year old Bryan, the youngest of the trio, who also owns a creative media firm. And the virtual--and real--work is paying off. The company launched its most successful invention last year, The Piggyback Rider, which simulates a piggy-back ride for a child, while keeping a parent's hands free. 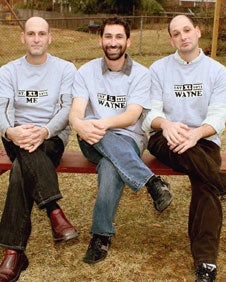 The first product, a reusable wrist cuff for writing grocery lists that Wayne invented, sold only about 500 units before they decided to discontinue it, but that initial effort is what got the brothers working together.

Wayne designed Full Sail, which is based in Bethesda, Md., to operate from wherever the brothers happen to be. There is no office, per se. Instead, the brothers rely on Skype, which also offers real-time file sharing and allows each brother to share an image of his desktop with each other.

"When we're testing out ideas or layouts this allows us to have projects reviewed while still in process, without having to spend extra time saving and emailing documents," Jonny says

The brothers also share digital whiteboards and Google documents to work on design features or document revisions. Their business processes became more structured when Jonny brought the idea of the Piggyback Rider to Wayne in an email. A day or two later, Wayne -- a strategy consultant by day -- had constructed his own version and the two began discussing how to improve the invention and sell it.

The product is designed for children who are too big for a baby carrier, but still want to be lifted or -- as Jonny's now 5-and-a-half year-old son Colin preferred -- be given a piggyback ride. The product includes a 3-lb harness-and-bar system that rolls up to the size of a towel and is placed over an adult's shoulders. The child then steps onto the bar that sits across dad's back and holds onto handles over dad's shoulder; a safety harness offers extra protection.

The brothers' first step in moving forward: patent research. They relied on Jonny to tackle that task since he hones research skills every day as a traumatic brain injury researcher at University of Kentucky.

"I could research and go down the rabbit hole and then pass along what I'd found," says Jonny.

Meanwhile, Wayne began to plot out next steps, keeping the project on task and making sure "we dotted all our i's and crossed all our t's," he says.

About nine months later, Bryan began providing design suggestions and ideas for selling the product. Bryan, who isn't on the company payroll, but actively serves as the company's creative consultant, also began crafting a vision for the packaging, marketing and social media push.

"We understand that each of us does things completely differently… that's the key to our success," Bryan says.

The Piggyback Rider got an immediate image boost when a children's expo attendee gave a sample to actress Tori Spelling last October. Days later, her husband Dean McDermott was photographed wearing the PiggyBackRider, his eldest child on board.

The Lifshitz brothers offer these tips for working with a virtual team.

Learn to do things you otherwise would pay for. When there are more than 1,000 miles between collaborators, adding contractors who also work virtually can add an unwanted layer of complexity. So the brothers learned how to do things they might otherwise pay for, like website design and legal research. They save money and maintain more control.

Be available--always. Jonny was examining slides of brain tissue in his lab when his phone rang. It was a buyer for a big outdoor retailer. "I quickly excused myself," he recalls. Without an office number to call, responding fast is critical, including answering emails and calls from customers, suppliers and each other with little delay--and never missing their scheduled weekly meeting. "Skype is our No. 1 business tool," Wayne says.

Use your time wisely. When you don't have a lot of time and you're operating from two or three different time zones, staying focused is critical. Bryan admits he can go off on a tangent--he's the talker of the trio. Wayne keeps their weekly business meetings on-track, tabling ideas not on the agenda for another time.

Corrections & Amplifications: An earlier version of this article misstated which brother had shared a joking exchange with his wife during a 3 a.m. business call. The brother in the conversation was Wayne Lifshitz speaking with his wife Eva.

Jennifer Merritt has been a business writer and editor for more than 12 years. She has worked at a number of publications including BusinessWeek, The Wall Street Journal and Money magazine.