Franchises Hop on the Food-Truck Trend

Cooked up by epicurious entrepreneurs, the mobile food business is starting to whet the appetites of established companies.
Next Article Add to Queue
Jason Daley
Magazine Contributor
July 26, 2011 10 min read

Farhad Assari wants to start a franchise empire. The former Washington, D.C.-based investment banker envisions a day when his Sâuçá brand is stamped on restaurants, clothing lines, music and even sauces in the grocery store. For the time being, however, the ambitious entrepreneur is content to sell his Sâuçá street food out of a truck.

But this isn't the roach coach of Health Department legend. Assari's franchise, which opened in March 2010 and currently has four trucks in the D.C. area, is wildly popular, with lines sometimes 50 people deep and franchise inquiries up and down the East Coast.

"This is gourmet food. It's very good quality," Assari says. "My idea was to bring street food from around the world to the U.S. People in the U.S. see street food as dirty. I knew if I cleaned it up and made it sanitary, people would like it."

Influential people like Assari's concept, too. Last year, Sâuçá was named the winner of the Great Emerging Franchise Challenge, a contest judged by some of the biggest names in the franchise industry. And Assari is not alone on the road. At this year's National Restaurant Association show in Chicago, food trucks garnered their own pavilion with six trucks--including Sâuçá's--on the convention floor. That type of buzz has caught the franchise world's attention. Not only are several food-truck concepts dipping their toes into franchising, but fast food and casual franchises are experimenting with a mobile presence as well.

The food-truck craze--whether it's a bubble that will eventually burst or a new fixture on the American culinary scene--is pulling in big numbers. In a 2010 survey by Chicago-based food industry research and consulting firm Technomic for American Express, 26 percent of Americans said they had visited a food truck in the last six months, despite the fact that most trucks are concentrated in a few big cities. A popular Food Network reality show, The Great Food Truck Race, in which seven mobile gourmands try to outsell each other, has primed millions of people for mobile dining.

"Ten percent of the top 200 restaurant chains will have a mobile presence in the next 24 months," says Aaron Noveshen, co-founder of Mobi Munch, a Los Angeles-based company that helps develop mobile platforms and runs several food trucks in California. "I can already count eight that do."

Even if the hipster sheen fades from the gourmet food trucks, Noveshen believes they'll still find a customer base at colleges, corporate campuses and other areas where full-service restaurants aren't viable. Food trucks offer something that is always appealing: convenience.

"People are more time-starved than ever," Noveshen says. "Mobile food will serve that need. It's a fundamental thing that never goes away."

In the franchising world, and especially at this experimental stage of the game, established businesses are testing the waters, mainly by using trucks as marketing tools. Taco Bell, Dairy Queen, Jack in the Box, Qdoba, Subway, California Pizza Kitchen, Carl's Jr., In-N-Out Burger, Fatburger and even Sizzler have put together food trucks or trailers they can use for special events or promotional purposes.

Tasti D-Lite, the frozen yogurt franchise, was inspired by franchisee Aaron Webster, who last year outfitted a van and began serving the yogurt at community events. Now the company is outfitting 10 Mobile Tastis for use by franchisees throughout the system. Gandolfo's New York Delicatessen is using trucks to get a feel for new markets as it begins offering franchises across the country.

Mauricio Acevedo, CEO of Banna-Strow's Crepes & Coffee, a four-unit crepe franchise in the Miami area with plans to expand this year, doesn't have to be convinced that food trucks are worthwhile. The company just began offering trucks as a franchise option. "For us, getting into the food-truck business was the next logical step," Acevedo says. "A truck highlights all the advantages of our concept. We don't have a kitchen, and everything happens on a griddle."

Once BannaStrow's trucks get rolling, they will likely develop regular stops or routes as customer awareness increases. "Our main opportunity is college campuses. We can literally take our restaurants to where students are," he says. "Some campuses are so big students can't make it to the food court. But they can pick something up from our truck and take it into Law 101."

The convenience factor is something Thomas Jones and his sister, Cheryl, also focused on after buying their first Cousins Subs franchise in Franklin, Wis., a suburb of Milwaukee, in 2007. The shop came with a truck, which the previous owner had used mainly for catering. But Jones, who had managed sub trucks for Cousins at festivals and special events in the late 1990s, decided to put his into full service, bringing sandwiches to the business parks in the area on a set schedule. 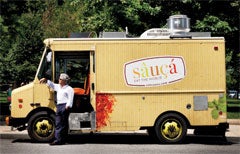 The plan was so successful he added a second truck and still sees room for growth. Not only is the truck a profit stream and mobile billboard, but catering orders from the businesses on his routes have gone up, too. "It goes back to convenience," he says. "There's a reason people love the drive-through. Lunch is 'me' time. We save them half an hour of going to a restaurant to wait in line."

Sâuçá's Assari agrees that convenience is key, although he thinks a truck needs something extra to maintain its customer base. "It's all about the food. People don't come for anything else," he says. "We're providing gourmet food at a very reasonable price at your doorstep. Those are all the elements somebody who has an hour to eat lunch would want."

Mobi Munch's Noveshen thinks that if franchisees start seeing food trucks as viable profit centers, they'll begin demanding mobile options from franchisors. "If franchisees want other revenue streams, food trucks can be a great add-on to a brick-and-mortar restaurant," he says. "They benefit from the purchasing and procurement of the franchise, and if there's idle prep space part of the day--and most restaurants have some of that--a food truck can help pay the rent and leverage that asset as much as possible."

But franchises need to go beyond thinking of the trucks as a marketing expense or limited-time gimmick. "These franchises need to partner with people with the right expertise and view the trucks as profit centers, not costs," Noveshen says. "They need to think, no matter what, that the food will be cooked to order, and the menu needs to be simple and straightforward and deliver on the brand. But they also have to put something special on the menu customers can't get everyday. They need something to talk about."

In many ways, food trucks from franchises are the opposite of the gourmet trucks that plot their course via Twitter and force eaters to follow them like the Pied Piper around town. Jones thinks the secrets to his Cousins trucks are reliability and predictability. "You have to make sure you're fully committed to the truck, and treat it like another store," he says. "It's not just something you do when you feel like it. Those people in the business parks rely on you being there. They trust you, so they don't pack a lunch."

Assari says communication via Facebook or Twitter is key in determining where his trucks go. "We have established routes," he says, "but people are in touch constantly, asking us to go to certain places, and we try to oblige."

Established food trucks are also looking to franchising to increase their business, though only a handful have pulled the trigger thus far. Kevin Higar, director of research and consulting for Technomic, spent the first few months of this year visiting more than 100 food trucks across the country. What he found was a strong entrepreneurial spirit. Most of the owners had lost their jobs and decided they wanted to work on their own, but didn't have the capital or experience to start a traditional storefront.

Most also said they aspired to have multiple trucks or to franchise their concept.

"Somebody in the food-truck business who wants five or six or seven units rolling around can get them up and running at a price point that's much less than a brick-and-mortar store," Higar says. "The cost for a potential new franchisee could be much lower, too."

Assari, whose Sâuçá trucks serve international food like banh mi, Mumbai butter chicken and beef shawarma, built his food trucks from the ground up with franchising in mind. "The idea of franchising was always there. I want to expand globally, and the only way to do that without a huge outlay of cash was signing up with a franchise company," he says. "The advantage for franchisees is that right off the bat, they don't have that huge investment. With a truck, for $100,000 you're in."

But there are real obstacles to food trucks becoming a mainstay in franchising. The reason the U.S., as opposed to almost the entire rest of the world, does not have a vibrant street food culture is because for most of the last century street food has been essentially illegal, or at least so heavily regulated that it's cost prohibitive.

Varying laws have formed a mosaic of food-truck hot spots and not spots around the country. Los Angeles; Portland, Ore.; Austin, Texas; and New York City allow restaurants to cook on their trucks. In Dallas and Chicago, trucks can only serve pre-cooked food, though new Chicago Mayor Rahm Emanuel has vowed to change that.

"Each municipality has its own regulations," says Assari, who helps franchisees negotiate various restrictions. "That's just the life of a food truck."

Josh Hiller, co-owner of RoadStoves, the custom-food-truck outfitter that has designed some of Los Angeles' most popular trucks, is skeptical that franchised trucks could capture the heart and soul of the food-truck trend.

"Food trucks are about creating a new product," he says. "Running a truck is so inexpensive you can do it yourself. With a franchise, you'd have to buy the truck, then pay the franchise fee, then pay the royalty. I don't know if you could sell that many tacos to make it worthwhile."

Then there's the cool factor, which Higar says could be tough for franchises to replicate. "Customers will tell you that interacting with an owner-operator--these passionate people following their dream--is a big part of the satisfaction," Higar says.

There's a very social scene. Franchises could lose that soul, and they have to be careful to protect that element. Sometimes you have to wait five or 10 minutes for your food. Sometimes it's a little more expensive. These places aren't cool because you can get food for 65 cents. There's more to it than that."