How an old-school New York entrepreneur is still standing strong in the fickle fashion industry.
Next Article

Rosalind Resnick
August 1, 2011 5 min read
Opinions expressed by Entrepreneur contributors are their own.

In the cut-throat world of fashion retailing, "Cheap Jack" Markus is the wild-card survivor.

After 37 years of seismic shifts in fashion trends, Cheap Jack's Vintage Clothing is still going strong. The 12,000-square-foot used-clothing emporium sits in the shadow of Manhattan's Empire State Building, and its huge inventory draws a diverse customer base that includes tourists, designers, celebrities and models. Vintage items range from casual clothing and cowboy boots, to gowns and furs, and even accessories that date back as far as the 1800s.

Still, Cheap Jack's longevity in the hotly competitive and fickle world of fashion merchandising may surprise many modern entrepreneurs. While most industry trends are tracked by sophisticated computer systems, Markus, who runs the store with his wife, Mona, is stubbornly old school. He does his own buying, prices merchandise by hand, and refuses to sell over the Internet -- even though he has a web site.

And, while occasionally a designer who frequents his store may snatch a classic 1950s dress for $175 and turn it into a $6,000 "original" without changing a stitch, Markus says he doesn't mind. He thrives on being an eclectic fashion resource for customers, which range from splashy TV shows like Mad Men to teenage fashionistas looking for a funky 1980s T-shirt.

"My clients are anybody and everybody," Markus says. "My bread and butter is people walking in off the street. I don't rely on movie stars and celebrities." 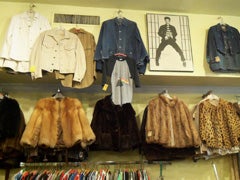 From fancy furs to sports jerseys to T-shirts of bands that broke up decades ago, Cheap Jack's styles have been featured in fashion magazines like Elle and Vogue, as well as TV shows like Project Runway and The Isaac Mizrahi Show.

"Cheap Jack's is inspirational to designers and stylists because they have one-of-a-kind pieces in immaculate condition," says Sherah Jones, a New York stylist and blogger who became so enamored of the store's vintage clothing that she took a job there several months ago. "As a stylist, it is a dream to work for this company because what fashionista wouldn't love working in a clothing museum."

While his business has a glamorous twist, Markus hails from humble beginnings. Now 65, Markus was born in Russia, the son of Holocaust survivors fleeing Poland for Israel after World War II. After the family moved to New York when he was 15, Markus met his future wife, Mona, whose father owned a dry-cleaning business. After working for his father-in-law for about two years, Markus saw an opportunity: Take the clothes nobody picked up and retail them as vintage goods.

"The clothes were really dusty because they hadn't been worn in years, and people would take off the plastic and ask, 'How much is this?' Three dollars, I would tell them," says Markus, recalling his entrepreneurial start in 1974. "I made a week's salary that day." 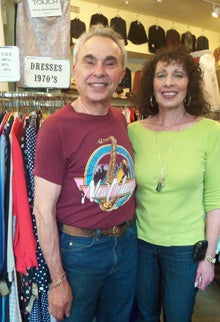 'Cheap Jack' Markus with his wife, Mona, inside their vintage clothing store.

Cheap Jack's East Village Vintage Clothing store was born. Adding to his initial inventory with bulk purchases of used clothes destined for developing countries, Markus quickly developed an eye for spotting a needle in the proverbial haystack. Thanks to his dry-cleaning experience, he could turn stained garments nobody wanted into fashions that retailed for hundreds, even thousands, of dollars. He even hired a seamstress to jazz up garments inside the store.

As Cheap Jack's grew, Markus kept his 1,000-square-foot Manhattan location on 1st Avenue between 9th and 10th Streets and just opened a bigger store a half-block away. Then he combined them and moved to a 12,000-square-foot location, next to bustling Union Square. When the landlord raised the rent, Markus moved to his current location on Fifth Avenue between 31st and 32nd Streets, now his only store.

Related: How to Negotiate a Lease

"My biggest expense is rent, and it comes out to $70,000 a month," says Markus, who declined to reveal revenues or other financial figures. "Since all the clothing is different prices, you can't tell how many T-shirts you need to sell a month [to cover the rent]. Some people pick up a couple of pieces for $12, and someone else will come in and buy five dresses for $5,000."

Here are Markus's three tips for other retailers looking to make it in today's tough economy:

1. Don't discount your best merchandise. Markus learned early on that across-the-board sales do more harm than good. During his first few years in business, Markus decided to slash prices on his entire inventory by 50%. "The only things [people] bought were the rare expensive items," Markus recalls. "I lost a lot of good items for half price, and ones I really wanted to get rid of I couldn't."

2. Keep talking to your customers. Unlike a Goodwill shop or a thrift store, Markus needs his store to be fashion-forward in order to attract sophisticated buyers. "When designers come in, I try to see what they are doing for next year [so that] I can order based on these designers and get the original," Markus says.

3. Train your staff. Markus runs his store with a lean staff of eager 18- to 24-year-olds, who help customers pick the styles that are right for them. "We like them to have vintage clothing experience, but, if they don't, I am willing to train them," he says.