A Guide to Generating Leads on LinkedIn

To me, LinkedIn has always seemed like more of a place to hunt for a new gig than anything else. And since I haven't been in the job market for a while, I've paid it little mind.

Plus, I've always thought LinkedIn was kind of ... well, boring. If Facebook is a rave at a hip downtown hot spot, LinkedIn is a stuffy reception with piped-in music at one of those soulless function facilities conveniently located at the end of an exit ramp.

Does that sound harsh? For sure. But now I've realized that I couldn't have been more wrong.

While the early adopters flock to Google+ and our kids and moms become power-users on Facebook, LinkedIn is where business gets done. Execs from all Fortune 500 companies are there, and 59 percent of those active on social networking sites say LinkedIn is their platform of choice over Facebook or Twitter, up from 41 percent who called LinkedIn their most important social account a year earlier, according to a June report by Performics and ROI Research. 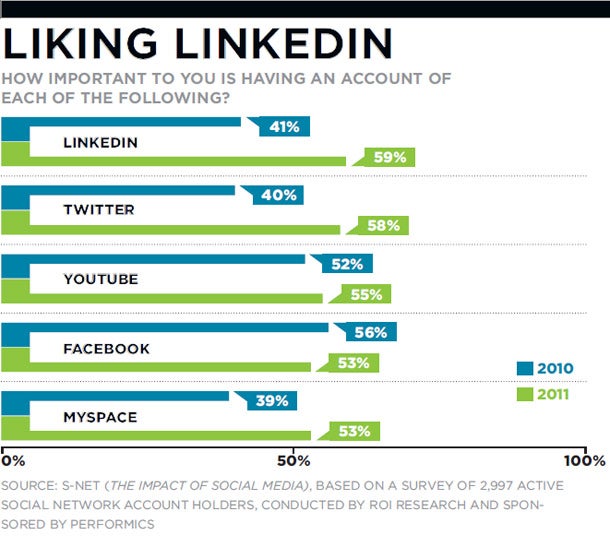 LinkedIn, it turns out, is a happening place. As of this spring, it has more than 100 million members in more than 200 countries, on all seven continents. In June--following a splashy and successful May initial public offering--LinkedIn counted 33.9 million unique visitors, up 63 percent from a year earlier, according to internet analytics firm comScore. That traffic meant it eclipsed Myspace as the second most popular social network on the web (after Facebook). (Of course, suggesting that LinkedIn eclipsed Myspace is a little like noting that the Rolling Stones are more popular than The Wiggles. The former remains relevant and continues to increase its audience, whereas the latter has limited and specific appeal--albeit to a passionate and loyal following.)

All of this adds up to making LinkedIn the dark horse in social networking. Or, as my friend Greg Straface calls it (he handles business development at Boston advertising and marketing agency PJA), the "unsung hero" of the social platforms. 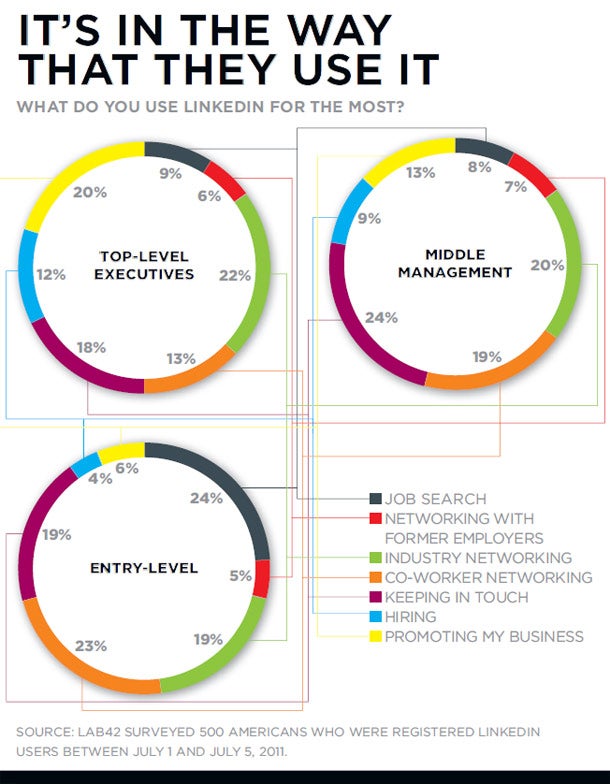 It turns out--as I suspected--there's an awful lot of job searching going on at LinkedIn. But there's much more going on over there, too. Market-research firm Lab42 finds that top-level executives and entry-level workers use LinkedIn differently: Younger members use the site mostly to post résumés and network for jobs, while more experienced professionals use it to demonstrate thought leadership and expertise, promote their businesses, conduct market research and--perhaps most important--win new business.

So how might companies use it to win new business, specifically?

Does all of this work? Yes, although it takes some focused effort. Straface says he spends anywhere from one and a half to two hours per day on the platform. But to him, it's worth the effort. PJA has won actual business via LinkedIn: inquiries, agency pitches and at least two new accounts worth between $300,000 and $400,000. Mining LinkedIn in this way, he says, "is only the tip of the iceberg."

Of course, be aware that your competitors are also able to apply these same tips and tricks; they are privy to the same social insights that could be giving them inside information about you. Your competition can also notice who you are connecting to, which could tip them off about new business in the offing. That's one of a few downsides of social media transparency. But that's a column for another day.