How to Bootstrap Your Business

By Michelle Goodman November 22, 2011
This story appears in the December 2011 issue of Entrepreneur. Subscribe »

Erica Zidel knew trying to raise funds for her startup would be a full-time job. She worried that chasing after capital would distract her from building the best product she could. So, rather than sweat the investment game, she has spent two years holding down a day job while bootstrapping her new company on the side.

During business hours, the Boston resident works as a management consultant. Evenings and weekends, she puts on her startup hat.

"I've basically been working two full-time jobs," says Zidel, founder and CEO of Sitting Around, an online community that makes it easy for parents to find and coordinate babysitting co-ops in their neighborhoods. It's a hectic schedule--schizophrenic, even--but it's also thrilling. "When I woke up this morning, I realized that it was Monday, and I got excited," Zidel says.

What's perhaps more thrilling is that she's been able to self-fund Sitting Around with the money she earns from her consulting work. Besides not getting sidetracked with fundraising, Zidel and her business partner, CTO Ted Tieken, have been able to retain 100 percent ownership of the babysitting venture.

"Bootstrapping early on means I have complete control over the vision and the product at a time when even small changes can lead to big consequences down the road," Zidel says. "I wanted the flexibility to make the right decisions, free from a board or an investor's influence. When you have just the founders making decisions, you can innovate much faster."

That focus on innovation has paid off. Sitting Around serves families in 48 states, as well as in Canada, Australia, Hong Kong and the U.K. Since the site launched in June, its user base has doubled every month; the company is on track to have 5,000 users by year's end. Sitting Around also was one of 125 finalists in this year's MassChallenge, a Boston-based startup competition and accelerator program. Perhaps most exciting of all? Shortly after launching the company, Zidel was honored at the White House as a champion of change for her contributions to child care.

Money vs. Time
The beauty of moonlighting with a startup is that it lets you test a business idea without jeopardizing your financial well-being, says Pamela Slim, business consultant and author of Escape from Cubicle Nation: From Corporate Prisoner to Thriving Entrepreneur.

"When you don't know where your monthly income is coming from, it often sets up a fight-or-flight response in your brain," Slim says. "And that's not a good place to be when you're trying to be creative. So having that psychological cushion is often very important for the development of business ideas." 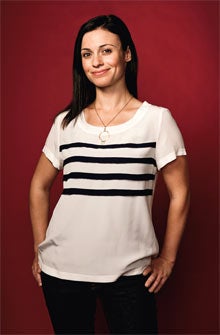 Juggling jobs: Erica Zidel of Stting Around works days as a management consultant.

Zidel will attest to that. Thanks to her day job, she's been able to pour $15,000 to $20,000 of her own money into her business. Not having to take on debt or live like a monk has been a point of pride--but it has also been a necessity. "Since I'm a mother, I have to maintain an adequate standard of living for my son," Zidel explains. "While I'm definitely frugal and very conscious that a dollar spent on lifestyle is a dollar not spent on Sitting Around, I'd rather work two jobs than feed my son ramen."

But as anyone bootstrapping a business on top of a day job will tell you, seed capital isn't the only ingredient in the recipe.

"When I started my journey as an entrepreneur, I thought the most precious resource was money, but it's actually time," says Aaron Franklin, co-founder of LazyMeter.com, a web-based productivity tool that launched in August.

Franklin and LazyMeter co-founder Joshua Runge initially began "messing around" with their idea nights and weekends while working full time at Microsoft. After four months of brainstorming and development, the two felt they could no longer do their day jobs justice. With LazyMeter still in the product-development stage, they resigned from Microsoft at the end of 2009, trading in their steady paychecks for a more flexible web-consulting client.

"We needed a source of revenue to buy us the time to build the right product. Consulting was really the perfect way to ease this transition," says Franklin, who is based in San Francisco.

Taking project-based work did more than just allow Franklin and Runge to bootstrap the startup. Because they performed their consulting work under their business entity, they were able to stretch their income further by putting their pre-tax earnings back into their new company.

Today, LazyMeter has more than 10,000 users. Although currently a free service, the founders plan to introduce premium subscription features as soon as the first quarter of 2012.

Juggling Act
Bootstrapping a business is not without its challenges. Besides the long hours and the strain on personal relationships, it can be tricky to split one's creative juices between two professional pursuits.

"Being pulled in multiple directions is the hardest," says Sitting Around's Zidel. "It takes a while for your brain to switch gears. And when things start to collide, it can be hard to say [what] you should be working on."

To stay productive and sane, Zidel schedules her workdays down to the hour and sticks to a list of non-negotiable items to accomplish each day. Still, she admits, "it's hard to stop working. I really have to force myself to carve out some personal time."

Bootstrapping with income earned from not a single employer but a cadre of consulting clients comes with its own set of obstacles.

"Sometimes customers require a lot of attention, making it difficult to carve out time for your startup," LazyMeter's Franklin says. Likewise, he adds, "When you start consulting, it can be tempting to work as many hours as they can pay you."

Either way, your startup loses--which is why it's important to make an exit plan and stick to it. "If you make enough revenue to last another month but slow down your startup by a month, you're not getting ahead," Franklin says. "Make sure your efforts are moving you forward, not backward."

Knowing When to Leap
How will you know when to quit your day job? Author Slim advises that once you've tested your idea in the real world and know there's a market for it, you should set specific, tangible metrics.

For Nick Cronin, co-founder and CEO of ExpertBids.com, which connects business owners with lawyers, CPAs and other consultants, the day came when his web startup began to bring in revenue. After spending 15 months growing his site to 10,000 users--7,000 of them experts--Cronin left his gig as a corporate attorney to work on his startup full time in November 2010. Now, he says, "We bring in enough money for a developer and myself to work on [the site] and to cover all expenses, including office space and advertising/marketing."

Before quitting his job, Cronin spent a year lining his savings account. "I knew that things were going to take time and that we were going to need a little bit of a runway before I could take a salary," says the Chicago-based entrepreneur. "My goal was to have nine months where, if we didn't make a dollar, I'd be totally fine."

The escape route looks completely different for Sitting Around's Zidel. "It's less the number of users and more the rate of growth. We've been testing different components of our business to see what works before we go out to raise money and turn the gas on," she says. "Now we have a lot of great data: what messages resonate, what products make money."

While she won't specify revenue, Zidel says her site is making money from its premium subscribers, who pay $15 per year, and from advertisers. In 2012, the company will launch discounted product offers to site members (such as backpacks for kids) and a pay-per-transaction scheduling tool for booking babysitters.

Until Sitting Around brings in enough to pay a comfortable salary, Zidel says she's content to juggle CEO duties with her consulting work. And to those who say you're not a true entrepreneur unless you quit your day job, she cries foul.

"A lot people think that to be a successful entrepreneur, you need to be sleeping on an air mattress and working on your business 80 to 90 hours a week," she says. "But I think that definition of success is silly. I'm living proof that if you have a quality idea and you spend your time well and execute it well, you can wind up with something great."

Protecting Your Rep at Your Day Job
Your boss may not be thrilled to learn that you're cultivating a side business. To avoid biting the hand that feeds you, follow this advice from Pamela Slim, author of Escape from Cubicle Nation: From Corporate Prisoner to Thriving Entrepreneur.

Check your employment agreement and employee handbook. Some companies have a no-moonlighting policy. Others have non-compete agreements that prohibit you from doing your own business with their clients. Others--particularly technology companies--have policies that nab the intellectual property rights of anything you create on your own time.

Keep quiet about your side project. Unless your employment agreement requires you to come clean about your after-hours venture, Slim recommends staying mum with managers and colleagues. Yes, some might be supportive of your side pursuit. But, Slim says, once the cat's out of the bag, "be prepared to be fired, as a worst-case scenario."

Don't work on your startup on company time. Just because you love your side project more than your job doesn't give you license to slack off. Resist the urge to use your work phone and e-mail to conduct startup business. "Take the calls on your cell on a break, and, if possible, use your own laptop or mobile device to check personal e-mail," Slim says. "Remember, everything is tracked and monitored in large corporations."

Don't burn bridges. Guard your professional reputation as though your life depends on it. "It's never a pleasant thing to be fired for performance," Slim says. "That's not the way you want to go out." Besides, your current employer might be a future customer or investor.