LAS VEGAS -- Ultra-thin laptops? Check. Blazing fast smartphones? Check. While the International Consumer Electronics Show (CES) always has been a showcase of the best and latest in innovation and creativity among big-name electronics companies, this year's event is highlighting startups, as well.

For the first time in the event's 44-year history, CES has created an exhibit space specifically for tech entrepreneurs. Eureka Park TechZone, which spans more than 9,000 square feet at The Venetian hotel, will introduce attendees to a stunning collection of new tools and the budding tech entrepreneurs who hope to bring their products and services to market.

We've scoured the Eureka Park exhibit space to see what's coming from tech entrepreneurs this year. Here's a look at three of the most interesting startups and the wild products they're developing. 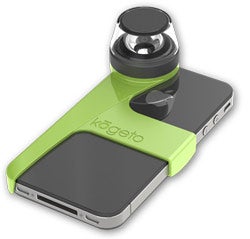 Instead of creating a standard video with your mobile phone, imagine capturing a 360-degree video of your surroundings. A New York City startup called Kogeto is one startup that's making it a reality.

Kogeto has developed Dot, an attachment that snaps onto an Apple iPhone 4 or 4S. The device adds a panoramic, high-resolution camera to the phone's existing lens, as well as twin microphones to capture audio. Unlike other panoramic add-ons for mobile phones, Dot comes with Kogeto's free Looker app and Dotspots web service, which allow users to share videos on Twitter and Facebook, and over email in real time. 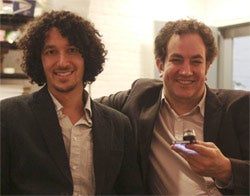 After unveiling Dot at a technology conference last summer, Glasse says he and Sosnow were invited to present it to Apple executives, who liked what they saw. Starting this month, Dot -- which retails online for $79 -- will be sold in Apple's U.S. stores.

"Having your product available in Apple stores is like being an artist whose work is selected to be exhibited at the Museum of Modern Art," Glasse says. Kogeto's 11-person team also plans to sell an Android-compatible Dot later this year, he says.

When the thought of "electronic vision" comes to mind, you might picture some amalgamation of popular sci-fi flicks such as The Terminator, The Matrix or Total Recall, with test subjects wearing cumbersome, Robocop-style headgear. But one tech startup is looking to take the experience beyond clunky equipment. 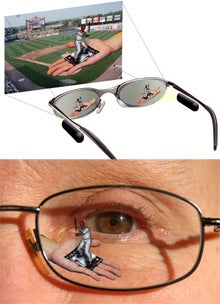 Example images of the technology behind Innovega Inc.'s augmented reality displays.
Image courtesy of the company.

The founders of Innovega Inc. -- headquartered northeast of Seattle in Hansville, Wash. -- have developed augmented reality displays that are integrated into contact lenses Those images can be seen when the user is wearing glasses with special lenses.

"Images are projected onto the spectacle lenses in the glasses, and the contact lenses enable the wearer to focus clearly on the images," explains co-founder and chief technology officer Randall Sprague, 55. He started Innovega with Steve Wiley, who serves as CEO.

"By putting all the imaging optics in the contact lenses … we can get rid of all that bulk and provide images that fill your normal visual space," he says.

Still in the development process, the Innovega team is seeking partners for manufacturing and distribution. It anticipates launching its first U.S. Food and Drug Administration-approved product by 2013. The mass-market applications for this technology can include video gaming as well as 3-D movie viewing, Sprague says. 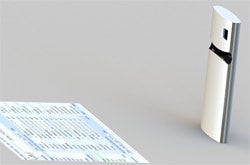 An example image of the technology behind Mezmeriz Inc.'s projector for mobile devices.
Image courtesy of the company.

While working on his master's degree in material science at Cornell University, Shahyaan Desai wondered how people might be able to project high-resolution images from small devices such as mobile phones. Desai, now 34, teamed up with Brad Treat, Cornell's entrepreneur-in-residence, to find a solution.

The result is Ithaca, N.Y.-based Mezmeriz Inc., which hopes to develop a projector small enough to embed into a mobile phone. The project is still in the prototype phase, but Treat says the goal is a device that can project full-color pictures and videos onto any surface. The projected image is expected to be about the size of a tablet computer.

"Mezmeriz's patented mirrors rapidly scan laser beams thousands of times a second to create a full-color video image," explains Treat, who is 40. "This can be embedded into any smartphone, tablet or other computer device." On-the-go business owners who often need to show colleagues and clients information and images from mobile devices might find Mezmeriz's projector useful, if it eventually comes to market.