This Franchise Is a Flying Success 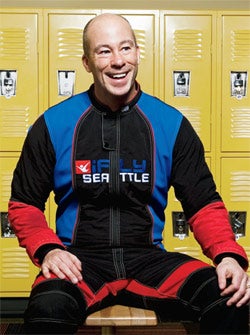 On top of the world: Bill Adams of Ifly.
Photos© Richard Darbonne

Staying in line, obeying orders, doing everything by the book--some might think the military is not the best place for an entrepreneur. Bill Adams disagrees. "I spent 21 years of my life working in the most entrepreneurial environment in the world, U.S. Special Operations (aka the Green Berets)," he says. "Having entrepreneurs in the infantry could be a disaster. But in Special Ops, that's exactly what they want. You need people who can think up a mission and then figure out how to do it, no matter what."

Needless to say, when he retired from the military in 2004, Adams wanted to work for himself. He created and sold a company that performs risk analysis on stadiums and other public venues. Then he invested in an experimental helicopter company, which he helped run for two years. When it came time to move on to the next venture in 2008, Adams decided he wanted to do something fun, and he and his wife, Lysa, both thought of the iFly franchise, which operates high-powered vertical wind tunnels in which users can practice sky-diving techniques or just bop around on a column of air. The couple met on a drop zone, and both had completed thousands of jumps, so it was natural fit.

The two prepared to open shop in their hometown of Seattle, but when the recession hit, their startup loan fell through. But they didn't give up, and in September 2011, Bill and Lysa finally cranked up the fans at their $10 million iFly Seattle location. Weekends have been fully booked ever since, and now they're planning to open a new location every 18 months throughout the U.S. We talked to them about their incredible takeoff. --Jason Daley

You've both experienced the real thing. Does a wind tunnel compare?
Bill: I first trained in a wind tunnel in 1988 at Wright-Patterson Air Force Base, when they were still top secret. It was just an old, converted C-130 plane engine in a silo with some chain-link fence over it. But after a week of training on that thing, I came away and thought, That's the most fun I've ever had. Someone needs to perfect that technology.

Lysa: When Bill first introduced me to indoor sky diving, I remember thinking, Everybody should have one of these in their backyard. When he started taking clients to the iFly in Arizona, I was jealous and told him, "You're just going to have to build me one." And he did. 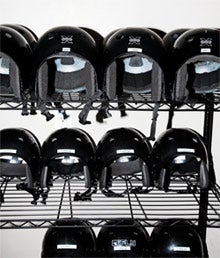 How did you line up financing in this credit market?
Bill: Even though our original financing fell apart, like in Special Operations, we still had our dream intact, and we set off to get what we wanted. Fortunately, I found a small group of friends to partner with me, and I found Foundation Bank, which focuses on clients like me. My banker had visited my helicopter factory in Arizona before, and even came to Alaska when I wanted to expand there. She checked out another wind tunnel facility and learned everything we wanted to do. They're involved in our business and made a commitment to us, when a normal bank would say, "Indoor sky diving? Good luck with that."

Who uses the tunnel?
Lysa: On weekends we cater to mom and pop and the kids, but the facility is built with real sky divers in mind. Our goal is to get these fans rolling 24 hours a day all week, and we're hoping to fill our after-hours with coaching and tunnel camps, where sky divers can get instruction from world champions. We also want to get the military in here for discreet, early-hours training. If you are a professional, this is where you hone your skills. If you dream of becoming a sky diver, this is where you begin. Or if you just want to feel what it's like to fly, we can make that dream a reality.

Has the excitement of the tunnel worn off?
Bill: Never. We fly in the tunnel every day, either before we open or after we close, and our kids fly on the weekends. We've been working on this business for the last year, so we haven't been able to sky-dive, but our flying skills have gotten really good.